How not to cover science: Bild’s campaign against German virologist Christian Drosten 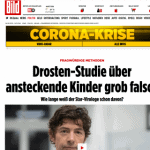 The German tabloid Bild recently published an article in which it sought to discredit the country’s foremost coronavirus expert Christian Drosten, to whom Chancellor Angela Merkel has regularly turned for advice on how to handle the Covid-19 pandemic. Bild claimed that the preliminary findings of a study Drosten had conducted into the coronavirus infectivity of children had been questioned by other leading experts.

It subsequently emerged that the apparently critical comments made by fellow academics on Drosten’s findings had been taken out of context; the academics concerned distanced themselves from Bild’s report and expressed their support for Drosten.

Sarah Kohler argues that Bild’s campaign showed total ignorance of the way in which scientific research works and demonstrates how important it is for journalists who cover scientific topics to have a sound grasp of the basic principles.

Bild’s campaign against Christian Drosten is a textbook example of what happens when the media fail to understand how the scientific research establishment works (or prefer not to understand it) and hence fail to convey the results of research adequately.

Science being “a work in progress”, preliminary research results are also published. In modern academic publishing, draft research papers known as preprints are made available prior to formal peer review and publication in a journal. They can be accessed on platforms known as preprint servers and come with a health warning attached. The one on medRxiv, the preprint server for health sciences, reads: “Caution: Preprints are preliminary reports of work that have not been certified by peer-review. They should not be relied on to guide clinical practice or health-related behavior and should not be reported in news media as established information.”

An avalanche of Covid-19 preprints

Over the last few months, the number of available preprints has mushroomed as a result of the coronavirus pandemic. Since January, over 23,000 articles on Covid-19 have been published. Science magazine described this development as being “among the biggest explosions of scientific literature ever.” The reason for this is mainly down to the urgency of the situation. Peer review by scientific experts is a process that can take weeks or even months. However, a greater understanding of Covid-19 is urgently needed and any insights provided by these preprints feed into political decision-making and prompt further research. Preliminary publications also have the advantage of being subjected to criticism from other experts at an early stage in the research process, which means that the first draft can then be improved.

Bild took these isolated critical comments out of context and claimed that the study was “grossly wrong”.

Bild picked up on one such preliminary publication by Christian Drosten, on the coronavirus infectivity of children, and tried to make a scandal out of some critical comments it had attracted. Not only did the paper have the eminent virologist in its sights, it was also first and foremost taking aim at Angela Merkel, who has paid attention to Drosten’s advice.

In his preprint, released on 29 April, Drosten came to the conclusion that children could be as contagious as other age groups. Statisticians took issue with the way in which Drosten had interpreted the figures. Bild took these isolated critical comments out of context and claimed that the study was “grossly wrong” and would have led to the closure of kindergartens and schools. However, these had in fact already been closed for weeks by this time. The experts whose critical comments had been quoted distanced themselves from Bild’s campaign and insisted that their suggestions should be read in context.

The tabloid’s campaign was based on a distorted view of how modern scientific research works. Debate and criticism are essential in science. For this reason, the criticism of research papers, especially of draft versions clearly identified as such, is not indicative of any failing but instead helps to advance scientific knowledge. By presenting criticism of a preliminary draft as if this were the final verdict on the study, Bild depicted a normal process as a problem.

It would be unthinkable today to make political decisions based on our state of knowledge at the beginning of January.

Ongoing work on developing new ideas that are still in a provisional state is essential for scientific progress. Unfortunately, this does not take into account people’s need for security and clarity at a time of great uncertainty. However, nothing is solved – and a dangerous situation could be made even worse – by clinging to obsolete theories, especially in a crisis. It would be unthinkable today to make political decisions based on our state of knowledge at the beginning of January (at that time, the coronavirus had not yet been classified as posing a threat to the health system).

It makes no sense to stop publishing draft versions of research papers. Science must be able to fulfil its basic task of producing, criticising and re-evaluating knowledge. This is where journalists have an important role to play. It is a journalist’s job to explain the scientific process to a wider audience and to critically examine the findings of scientists. Unfortunately, today this happens only to a limited extent, as in recent years science journalism has struggled to hold its own in newsrooms and has completely disappeared from many of them.

Though many scientists are now experts on Covid-19 and a huge amount of scientific literature on the subject is now available, the media have tended to focus on just a few studies and a few people, so that the picture they paint of the current state of research is inevitably incomplete.

Journalism must shine a critical light on science. But to do this, journalists need to be able to place research projects in their context and draw on diverse scientific voices. Scientists rely on journalists to communicate the results of their research to a wider public, but at the same time, journalists need to have a grasp of science in order to understand these findings. This is why science and journalism need to work more closely together.

Journalists who cover scientific developments need to have a grasp of basic scientific concepts and to understand how research is conducted.

For this to happen, certain requirements need to be met. Scientists need to make it quite clear when what they are publishing is still a draft version of their findings, so that media professionals are in no doubt as to the status of the study and understand which conclusions can safely be drawn from it. Researchers should state openly if the results of their study are to be treated with caution. They should spell out the extent to which the results are applicable to other areas.

Various initiatives have been launched to promote better understanding and closer cooperation between science and journalism. For example, the Science Media Center offers an invaluable resource to media professionals in the German-speaking world by providing timely assessments of research papers, backing these up with statements from other experts in the field.

This is a slightly abridged version of an article first published by the Swiss online media magazine Medienwoche on 4 June, when it was headlined “Kampagne statt Kritik: Was bei «Bild» vs. Drosten schief lief“.

If you liked this story, you may also be interested in Why Journalism Needs Scientists (Now).

Sarah Kohler has a PhD in communication science from the University of Münster. She previously worked as a Senior Scientist at the University of Klagenfurt in Austria and is now a post-doctoral researcher in the department of science communication at the Karlsruhe Institute of Technology.
» Ethics and Quality, Recent, Specialist Journalism » How not to cover science: Bild’s...