How Data Journalism Is Taught In Europe 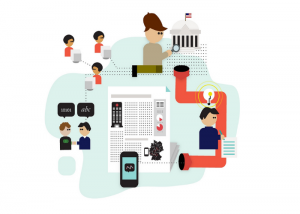 Universities and colleges across Europe increasingly offer training in data journalism, although to varying levels, according to a study comparing how the subject is taught in six European countries. The study found that in the Netherlands, Germany and United Kingdom data journalism training is flourishing in universities. Italy and Poland follow – although in Italy it is less structured. Switzerland has been slowest to embrace the discipline.

The research, Educational strategies in data journalism: a comparative study of six European countries, deals with a neglected aspect of data journalism: how its practices, languages and tools are taught by universities and journalism schools around Europe.

The paper is the result of a collaboration between European researchers in six countries: Philip Di Salvo (Università della Svizzera italiana, Switzerland), Tobias Eberwein (Institute for Comparative Media and Communication Studies, Austria), Harmen Groenhart (Fontys University of Applied Sciences, The Netherlands), Michal Kus (University of Wroclaw, Poland), Colin Porlezza (University of Zurich, Switzerland) and myself.  The research findings will be published in a forthcoming edition of Journalism.

Data journalism is young and evolving

The starting point of the research is that it is crucial to know how data journalism is taught, to understand the ethical challenges it presents. Data journalism education is a young and multidisciplinary part of journalism training and includes many new skills. For example, computing and visualizing are different in the digital era and the way they are taught should take the developing role played by numerical data into account.

Contemporary data journalism, given the diverse nature of the data and their size, is also closely linked to fundamental journalistic issues, such as ethical, transparency, and accountability.

Our research compares data journalism training programmes in six European countries (Germany, Switzerland, the Netherlands, Italy, Poland, and the United Kingdom). The research was conducted through a desk analysis of the different programmes provided in each country, also in-depth interviews with instructors. The trajectories of the research can be summarized in two parts: the differences among the programmes provided in all the countries and, secondarily, the visible common patterns.

Within all the analysed countries, programmes are offered by four types of organisations: academic, vocational, professional, and civic. We discovered the influence exerted by each institutional category depends mainly on the peculiarities of national media systems and journalism culture. In other words, in countries where journalism education is generally more institutionalised, data journalism training and the background of the educators will also be. A clear example is the case of the UK, where data journalism educators generally have an academic background and courses are taught in journalism schools.

In Poland and Italy, data journalism training is not always available

In countries where journalism education programmes are less common or less competitive, data journalism and other innovative journalism practices are rarely taught, and the backgrounds of the educators are more heterogeneous. For example, in Poland and Italy data journalism courses often follow unpredictable trajectories and non-institutionalised patterns. They are generally courses offered by a public institution, non-profit organisations or by journalists who have learnt data skills on their own or “imported” them from abroad.

Overall, the Netherlands, Germany, and United Kingdom are the countries where data journalism education is flourishing at the university level. Italy and Poland follow, but Polish journalists benefit from a wider range of non-academic courses. The provision in Italy seems to be scarcer and less structured, while Switzerland offers a reasonable number of options.

As a second layer of analysis, we focused on the structures of the courses. There are two key areas to analyse: the content of data journalism curricula: (1) practical versus theoretical contents and (2) statistical skills versus journalistic skills. Our research highlights that university-based courses generally take a more holistic approach, while training programmes offered by media companies and other private institutions usually focus on more practical skills, such as data gathering, elaboration, analysis, and presentation.

When it comes to the weighting of statistical/mathematical and journalistic skills, the situation is comparable: in longer courses, particularly at the higher education level, the focus is mainly on statistical topics. Shorter courses or workshops try to combine statistical and editorial skills.

The research also found commonalities in how data journalism is taught in Europe. For example, non-academic institutions (such as the European Journalism Centre or the Centre for Investigative Journalism) and major international news outlets (The Guardian, The New York Times and ProPublica) seem to take a leading role in all the analysed countries and are usually seen as cornerstones and best practices of data journalism. Moreover, a lot of didactic material is available online in all the analysed countries; this may be because teachers are keen to share their work online.

Cost of data journalism will remain crucial to its future development

The future of data journalism – and teaching of the subject – will be strongly influenced by contextual factors. Data journalism is generally a more expensive form of reporting in terms of time and resources, and so financial issues are crucial. The amount of data available in each country – a factor which is mainly linked to the existence and implementation of a Freedom of Information Act – will also play a major role in the effective adoption of data journalism.

Our study seems to prove that educational institutions are slowly, but increasingly embracing data journalism.
Article translated from the original Italian by the author

Sergio Splendore is a researcher at the Social and Political Sciences Department of Università degli Studi di Milano, Italy. He obtained a PhD at the graduate school in Social, Economic and Political Sciences of the same university. His main research interest is media production, both in the journalistic and entertainment fields. Sergio is the author of Sociologia del format (Unicopli, Milan 2009) and Giornalismo in mutazione. Inchiesta sui media tra Genova e la Liguria (1980-2004) (with M. Milan, Erga, Genova 2005). He also authored several articles for Italian and international journals. He's a member of the The Worlds of Journalism Study research group and sits in "Comunicazione Politica" and "Problemi dell'Informazione" [email protected]
» Recent, Specialist Journalism » How Data Journalism Is Taught In...