Brevity is the Soul of Wit 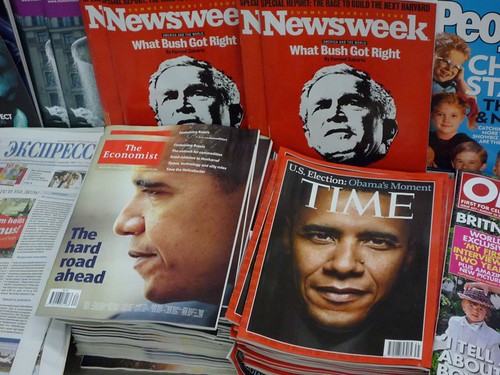 The WAZ media group and the Springer group will not be joining his projected Woche. They simply don’t see a chance for a new German news magazine. Anyone who wants a news magazine these days can have one. In fact, Newsweek is up for sale.

Newsweek is a monument of press history. Founded in 1933, the paper reached a circulation of 4 million in its best years. Now circulation is at 1.5 million. The annual loss amounts to $29.3 million. The parent company to the Washington Post is selling off its subsidiary, and the Newsweek sale – in addition to the rebuff of Stefan Aust – are characteristic of today’s industry. News magazines are a dying breed, with the exception of one.

One can gracefully trace the changes of the media industry via news magazines. Most of them came into existence between 1930 and 1970. In these times, the media world was still well-regulated. Newspapers printed current affairs daily, while the magazines dealt with the news in detail and provided background information on a weekly basis. The Internet was called Arpanet and was only of interest to the U.S. Department of Defense. Titles such as Newsweek, Time, U.S. News & World Report, BusinessWeek, L’Express, Le Nouvel Observateur, Elsevier, Panoroma, Spiegel and the Economist became the key media outlets of their generations.

Their success resulted from two factors. Magazine journalists were able to investigate extensively and without competition from the daily press. They regularly provided readers with spectacular scandals and pseudo-scandals. In addition, they impressed audiences with a awe-inspiring timeliness and breadth of knowledge, which was largely based on archives containing millions of press clippings. In 1970, Spiegel’s documentation department employed 100 staff members.

Soon after, newspapers began offering investigative research and background stories as well. This was done to compensate for losing some thunder to television and radio outlets that were about to match timeliness in newsgathering. From 1994 on out, the Internet helped accelerate this process. However, the lead gained by news magazines and their vast archives became worthless over night.

Today, Newsweek is up for grabs. BusinessWeek has been taken over by Bloomberg for a ludicrous $5 million. News & World Report is now released just monthly. L’Express has been sold to Belgium. Panorama is supported by Silvio Berlusconi. Der Spiegel remains static. The circulation of the German Focus slipped from 820,000 to 580,000. Facts in Switzerland was retired in 2007.

That said, we get to the exception. The only news magazine registering growth is the British Economist. It tripled its circulation since 1995 and now has a circulation of 1.4 million. The profit falls around 100 million Swiss francs.

All big exceptions have simple explanations. The reason for the Economist’s success is the publicist’s concept. It’s geared towards the hurried, intelligent reader. The articles are short, even when the topics are complex. The text is unfussy. Stylistic elegance is discouraged. Photos are considered as unnecessary. The editorial staff is small, just about 80 employees. Editor-in-chief John Micklethwait dresses in tailor-made suits and says, “I believe only talent and quality count.”

» Media Economics » Brevity is the Soul of Wit