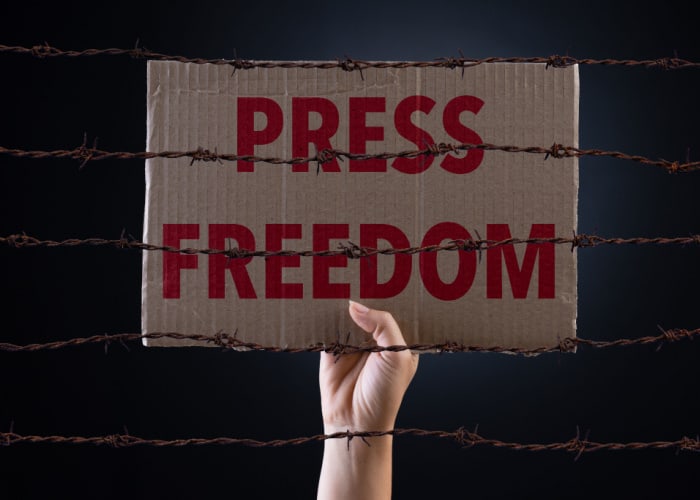 History has shown us that where freedom of the press declines, democracy suffers. That is why press freedom has remained a burning issue for countries around the globe. And while the Federal Constitutional Court recently empowered journalists in Germany, reporters in many parts of the world continue to face hardships. This is reflected in the 2022 Reporters Without Borders (RSF) World Press Freedom Index, which showed a  “very bad” situation in a record 28 countries.

Myanmar is one of the 28 and was almost at the bottom of the 180-country-index, ranking at 176. Independent journalism was made nearly impossible in the country after the junta staged a coup against the government. Critical journalists were imprisoned and tortured, while independent media outlets had their licenses revoked.

In Belarus, ranked 153 and placed on the Index’s ‘red list’, dictator Alexander Lukashenko relentlessly persecutes journalists who question authorities. As a result, at least 300 journalists fled the country. And though Hungary ranked higher at 85, the state systematically represses press freedom by abusing its legislative, regulatory, and economic power. The aim is to gain control of the public service broadcaster and concentrate private media in pro-government conglomerates.

But freedom of the press is not always so visibly repressed. There are more subtle approaches, such as agenda cutting. In Japan, for example, the media system is just as intriguing as it is concerning. There is an intense entanglement of politics, economy, and journalism. Access to information is massively limited and regulated through exclusive press clubs known as Kisha Clubs. These Clubs are fixed offices for media outlets within government or business organisations. They grant access only to a few, such as the public service broadcaster NHK, and information not intended for the public is locked away in off-the-record conversations. Thus, information flows, as well as freedom of information, are massively regulated. The result is a threat to freedom of the press.

The issue of agenda cutting was dealt with by a panel of experts at a recent Global Media Forum, hosted by the German public, state-owned international broadcaster Deutsche Welle.

At the event Yosuke Buchmeier, a research associate at Munich University, said: “Let’s take the fictive pair of Tom and Jerry. Tom goes on vacation over the weekend and leaves Jerry alone at home, who has an affair during that time. After returning from his trip, Tom asks Jerry how his weekend was. Of course, Jerry does not want Tom to know about his affair, so he wilfully leaves out that information. ‘It was a quiet weekend. Not much has happened‘. That precisely describes the essence of agenda cutting. Someone holds information wilfully back due to an underlying agenda. This information one can only gain by asking pinpoint questions. Thus, agenda cutting is a form of voluntary self-censorship. Journalists avoid problems with big business or political players by simply not covering topics.”

Speaking to Buchmeier, he highlighted the challenges facing journalists in Japan. He said: “Japan has a significant and structural problem in its media system. There are a lot of taboo topics within Japanese society – for example, criticism of the government, economic issues, nuclear energy, and the emperor system. Instead of reporting on those, the news coverage redirects the public’s attention (to less critical topics, through its editor’s note).” News coverage silences selected topics, considered too culturally sensitive, or wilfully cuts them from their agendas. Instead, they focus only on more minor or less contentious news, such as delays in Tokyo’s strictly clocked subway system.

“Interestingly, the existence of Kisha clubs is national and international hardly known,” said Buchmeier. It is estimated that 800 Kisha Clubs exist in Japan. However, the exact numbers are not publicly known. Within this system, the press can hardly be the government’s watchdog. The power relationship is too one-sided. If news coverage is not favourable or even critical, an organisation can easily revoke access to the Kisha Club. “The media is downright held hostage,” said Buchmeier. As a result, editorials regularly do not inform the Japanese public about critical topics.

From the shadows, Kisha Clubs undermine independent and critical journalism, which results in voluntary self-censorship. Despite these challenges, journalists have recently been able to report on the entanglement of the government and religious sects – an issue that was known about for years but was effectively cut from editorial agendas.

According to RSF, since the 2012 inauguration of ex-president Shinzo Abe, who was assassinated in July this year, journalists have complained about a climate of mistrust against them. In 2013 Abe‘s government passed a bill that criminalised whistleblowing and repressed press freedom. Based on the State Secrecy Law, courts can punish the distribution of secret information with up to 10 years imprisonment. That is clearly a situation in which the law curtails the agenda of the media. Consequently, Japan slid nearly 50 places down on the RSF Index, from a rank of 22 to a rank of 71.

After studying psychology in the Netherlands, Bjarne Overkott switched careers and is now a journalism student at TU Dortmund, interested in untold stories, culture, sports, and politics.
» Media and Politics, Press Freedom, Recent » The enduring press freedom challenge: how...