Why journalists in Ukraine fell in love with Telegram

The messaging app Telegram was built around the idea that communication should be personal and encrypted. But in some countries it has become a popular tool for journalists to create public news channels. Here are three takeaways from Ukraine.

When Fedir Popadyuk created the first Telegram channel of Ukrains’ka pravda in 2017, the messenger app was only gaining momentum in Ukraine.  “I thought, ‘There is a platform and there are people interested in it,’ ” said Popadyuk, who is responsible for Telegram channels at Ukrains’ka Pravda. “We need to cover this audience.” Almost half of Telegram’s Ukrainian audience are people under the age of 25, according to a survey conducted by the marketing research company Kantar.TNS, and many of them don’t watch television or listen to radio news.

“The purposes of using the messenger app have changed,” said Marina Kostromina, account director at Kantar Ukraine. “While last year it was used mainly for communication with friends, now it is also used for file sharing and news reading.” This trend is a global one and it has evolved over the last few years. However, regional characteristics are key components for making the app an effective multimedia hub for distributing information, a report of the Tow Center for Digital Journalism found.

Another reason why so many journalists in Ukraine have embraced the chat app is because many of them find it convenient to experiment with formats and tone of voice on Telegram’s news channels. Also, in contrast to WhatsApp, which limits the amount of members on a particular channel, Telegram offers an unlimited number of subscribers and also provides a view counter for posts that includes forwarded copies.

Oksana Denisova and Tetyana Nikolayenko are running the popular channel “The Newsroom.” They started the channel when they were both working at The Insider but after leaving that media outlet, Denisova and Nikolayenko developed the channel into a stand-alone product. “We had an understanding that Telegram is quite effective as a medium,” Nikolayenko said. “If you post something on a Facebook it doesn’t necessarily mean that everyone will see your message. With Telegram you can really reach the entire audience of the channel.”

“I think there are a number of reasons why Telegram has become so popular,” said Ivan Oberemko, who created the Telegram channel for a popular show named “#@)₴?$0,” one of the 20 fastest growing channels in the country. “For the reader, it’s a convenient platform, not overloaded with content but also with offline access. For the publisher, there is no need for comments. Everyone is fed up with it on Facebook and Twitter. And Telegram provides very high conversion rates for audience responses, conversion from views to page visits, views in real life.” 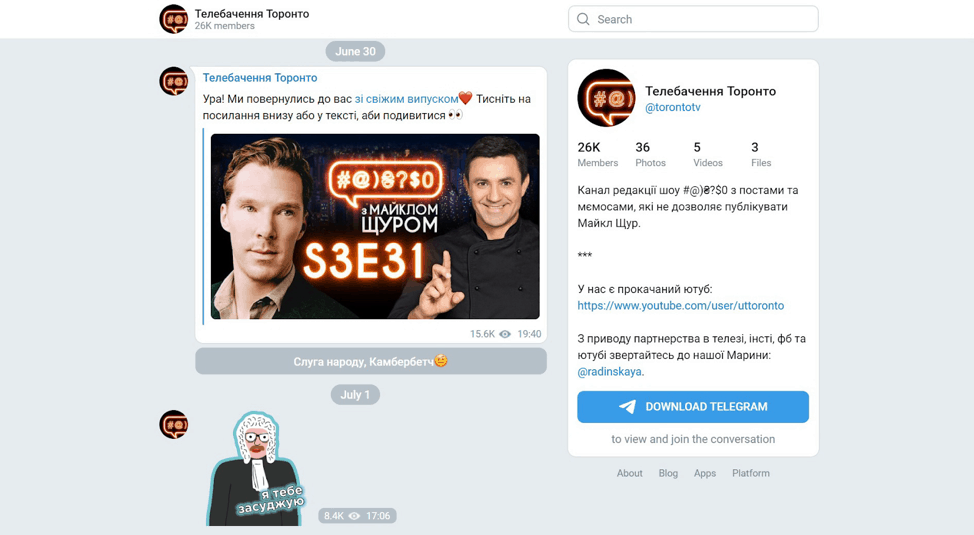 Telegram’s encryption plays a major role in another news channel at Ukrains’ka pravda called “УП. Off the record.” Here the newsroom publishes insider information that comes from official sources in politics or business. “I know that sometimes journalists are using secret chats in Telegram for corresponding with politicians,” said Popadyuk. “It is very convenient because all messages disappear and there are no traces left.” While Telegram has been criticized for loopholes in user data protection and has come under pressure in Russia and Hongkong, none of the interviewees in this article mentioned security issues or pressure from the government. In fact, in Ukraine politicians like the current president Volodymyr Zelensky are actually using Telegram for their election campaigns.

If you liked this story, you may also be interested in Why messaging apps matter for news engagement.

Tanya Gordiienko is a Ukrainian journalist and photographer. She is a PhD student at the School of Journalism, National University of Kyiv-Mohyla Academy. After working in a number of Ukrainian news media outlets, she joined the nonprofit organisations, Detector Media and Media Development Foundation. Tanya's main interests include new media, digital tools and storytelling.
» Digital News, Recent, Technology » Why journalists in Ukraine fell in...