Panel debate: Should journalists be activists? 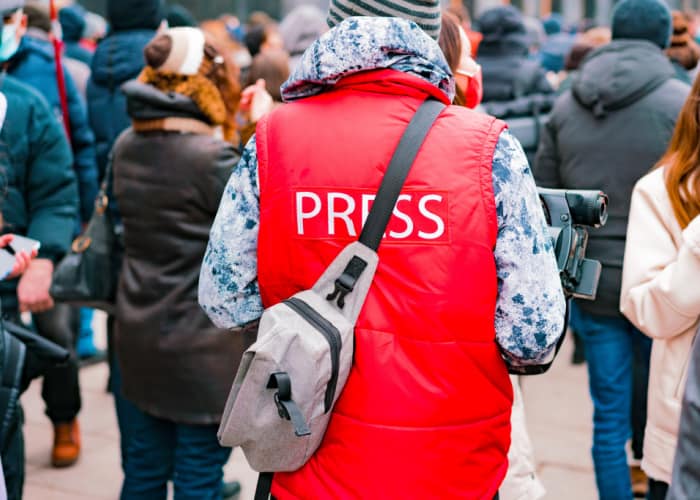 Over the years, more and more journalists have joined mass protests such as those linked to climate change, war, and the Black Lives Matter (BLM) and other civil rights movements – not just to report on them but also to advocate for change. However, the idea of the journalist as an activist can be problematic, as noted in Tim Vos’ journalism handbook. This is because journalists are expected to remain objective and unbiased in their roles of producing, verifying, and delivering factual information on current matters of public interest and importance.

According to Waweru, journalists must decide whether to push a story or not. “Sometimes you want to tell a story, but it’s impossible without becoming an activist,” he claimed. Mello, however, saw it differently. She maintained that activism and journalism don’t belong together. “We can learn from them and support them,” she explained, “but they need to be separated”.

In Limbourg’s view, media professionals should only advocate when it comes to human rights, tolerance, and democracy, but a line should be drawn when it comes to other issues. He pointed out that if journalists are too focused on activism, they could contribute to further polarisation. “There is too much polarisation already, so let’s get to the facts,” he said.

“There are no two sides to a fact”

Speaking to Mello at the Forum, she acknowledged that “100% impartial reporting is a utopia,” but that doesn’t mean media professionals should not strive to report in the most balanced and impartial way possible.

“That’s the difference between activism and journalism,” she said. “If you’re an activist, you already have a position you know you have to defend.” She added that, as a journalist, you’re not supposed to defend a point of view, but rather inform the public impartially and be “as factual as possible” so they can draw their own conclusions.

She also stressed that impartiality is not synonymous with false equivalency: “Some people think you have to give equal space to people who sometimes defend things that are not points of view but lies, but you don’t, because there are no two sides to a fact.”

Mello addressed the issue of transparency in reporting. Some people, she pointed out, “just won’t understand the difference between facts and advocacy”. She explained that though audiences can decide which facts to believe, it is important for journalists to keep reporting accurately, keep stating the facts and sources, and to be transparent. “Show the documents, take pictures…. everything should be very concrete because that’s how you increase credibility,” she said.

Despite the panellists’ differing opinions, all three agreed that it is necessary to bring people into the conversation and to acknowledge the problems, and report the facts. “The truth belongs to the people,” said Waweru.

Limbourg added, during the panel discussion, that journalists need to show the whole picture, even if that means it’s complicated. And if it’s too difficult to understand or grasp, then media professionals and media houses “need to be clearer on their message”.

After listening to the panellists, one thing was clear, activism and journalism are not the same thing, and while they can be mutually supportive, there is a fine line between them. But where is that line to be drawn? In the panel discussion, Limbourg referred to a statement made by a DW trainee that “journalism is about the public interest and advocacy is about partial interest”, suggesting that as soon one starts lobbying for something specific instead of being critical and objective of all perspectives, one becomes an activist and not a journalist.

Indeed, as Mello suggested, transparency is key in addressing this issue of activism in journalism – so, for example, making it clear what are facts and what are opinions. Notably, Limbourg in suggesting ways to handle the issue referred to “constructive journalism”, in which journalists not only report on the world’s challenges but also focus on the possible solutions to these problems.

If you liked this story, you may also be interested in: Policy brief from UNESCO recommends urgent interventions to protect quality journalism