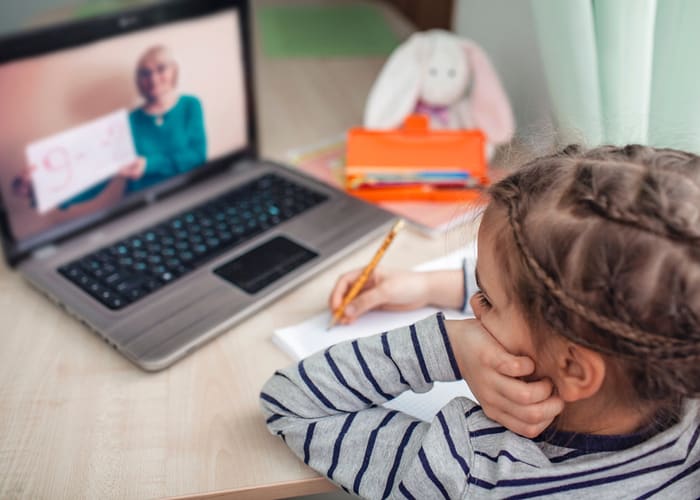 Two years ago, the UK government closed all schools in England and Wales virtually overnight, thanks to Covid-19. A new education white paper, published in the last week of March, wants to use the Oak National Academy – the online lesson service set up in April 2020, as the basis for an expansion into a fully-fledged arm’s length curriculum body. The implications for teachers are far-reaching – the resources the body produces will be ‘optional’ but also ‘free’ – suggesting a strong incentive to use them.

Interestingly, the BBC does not feature in the government’s plans. This is despite the fact that in March 2020, the Department for Education also asked the BBC to provide a lockdown teaching service. As the UK’s public service broadcaster, the BBC was the obvious go-to agency for such a crucial emergency function.

The BBC deliberately went beyond the government’s request, providing more traditional enriched educational programming rather than the filmed lessons the government envisaged. According to reports from Ofcom and Oak, both services were popular and effective.

However, the BBC’s claim to be making ‘the biggest educational push in its history’ during the pandemic was odd, given that for most of its life, it operated a vast educational service. At its peak in the 1980s, BBC Schools featured over 150 series and over 1000 hours of output per year, with almost all UK schools using it and providing whole curricula in many subject areas.

Schools’ series were planned in consultation with experts, overseen by an independent body representing the educational world, informed by cutting edge research and backed up with printed publications. As a result, pioneering work in many subject areas, including the now ubiquitous phonics for initial literacy, was developed and rolled out by the BBC.

The BBC fought continuously to overcome the biggest criticism of audio-visual educational media – that it breeds passivity. Most schools’ series deliberately encouraged activity-based project work and engagement with the world outside the school. The BBC led this movement nationally, with the cachet and contacts to liaise with museums and libraries to feature exhibitions and books to coincide with series.

That is why it was said that if you passed a primary school in the 1980s and saw a dinosaur in the window, you could be sure that Watch! (a BBC Schools’ series) was doing a project on dinosaurs that term.

This, the most impeccably ‘public service’ of all the BBC’s output, is hardly remembered today. It passed by most adults, who never watched television during the day; was stigmatised by some in the teaching profession; and was gradually de-prioritised by the BBC hierarchy for whom producing school broadcasting was expensive, difficult and thankless.

Most importantly it was ignored by the government who, until the 1980s, largely stayed out of regulating the content of broadcasting or the curriculum. Ironically it was the reversal of these policies which eventually destroyed public service educational broadcasting.

In 2008 the BBC was prevented from moving its schools’ service online after successful lobbying by commercial educational publishers, who argued that the BBC would crowd out a potentially lucrative online market. Instead, all the BBC would now offer children and their teachers was an exam revision service called Bitesize.

The expected spectacular growth of the commercial online resource sector never materialised, perhaps because audio-visual media production requires expertise that educational publishers did not possess. Classrooms became laden with projectors, interactive whiteboards and broadband internet access throughout the 2010s, but there was nothing to watch.

The BBC now competes as a medium-sized player in a crowded market. Yet the new online video giants, Google/YouTube, Facebook/Instagram and Netflix, show no intention of creating and maintaining a comprehensive educational resource provision, tied to schools and deep in theory, and not-for-profit.

So, this new curriculum body would do well to learn from the history of BBC Schools. This will require imagination, collaboration and trust between media and teaching professionals. As Dr Mary Bousted, joint general secretary of the National Education Union, said, the white paper fails to recognise perhaps the most important takeaway from what schools and teachers have been through in the last two years – the importance of local networks and empowering professionals on the ground.

The new curriculum body will further centralise control over schools, which has expanded since the National Curriculum (1988) made all taught content subject to government approval, and academisation since 2010 removed schools from local authorities. The government will control what is taught and the media used to teach it.

Arguably it is the BBC’s status as a cultural institution that allows it to penetrate culture in a way that the Department for Education cannot. The new curriculum body should be invested with the independence, intelligent oversight and freedom to engage and be creative that made BBC Schools so successful. The BBC, which now collaborates extensively with other providers and institutions in its own education campaigns, should not be overlooked as a partner.

If you liked this story, you may also be interested in: Why we are adding politics and history to journalism education

Steven Barclay studied history and philosophy before working in the television industry. He later obtained an MA in Media Studies and a PhD in the history of educational broadcasting from the University of Westminster. He is currently working for City University on the life and career of the broadcaster Alistair Cooke and the Charitable Journalism Project on the decline of local news and democratic participation. His latest publication is - Steven Barclay (2021) The BBC School Broadcasting Council and the Education System 1935–1971.
» Latest stories, Specialist Journalism » Why the UK government’s new school...