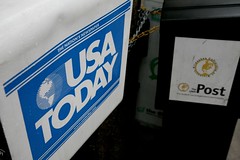 “It is a priveledge to be a journalist in this country.”

And yet never has there been so much pessimism about journalism and its future than in these times. These are the words of Charles L. Overby, Chairman of the Freedom Forum and Diversity Institute – an independent foundation that strives to defend and safeguard the Constitution’s First Amendment – and CEO of the Newseum, the interactive museum on the history of journalism in Washington D.C.

In fact, the circulation figures of American dailies published in the Audit Bureau of Circulation are not very comforting: from April to September this year, 635 daily newspapers registered a decrease of 5 percent compared to the same period last year (the previous year’s decrease was even greater – 10 percent).  In particular, according to Overby’s information, the Washington Post lost 13 percent and the New York Times 8 percent.  The Wall Street Journal and USA Today are an exception, and confirm their positions as the most-read and most-sold newspapers – and their accounts are not in the red, they actually earn money.  Sunday editions on the other hand have seen a 4.5 percent drop and the edition with the largest readership is that of the NYT.

Overby believes the time has come for publishers to act and become the promoters of change, rather than suffering its consequences.  One of the greatest challenges, in his opinion, is to recover from one of our largest mistakes: offering content and news free on the Web.  Inverting the trend will not be easy for certain.  Publishers will have to explain to their readers why a product that, until now, has been available for free suddenly comes with a price.  And they shouldn’t be surprised if readers are reluctant.  It’s important to make audiences understand that a quality product, a unique product that translates to value, has a price.  This is also why copyright regulation must be introduced to protect content and force the brakes on news aggregators, he says.

Furthermore, Overby is hopeful about the future of journalism and of newspapers, even those in print. We haven’t heard the last word yet, especially as long as advertisers continue to prefer paper for their advertising and the press continues to control the agenda and the selection of news items.

Natascha Fioretti reports from Washington, where she attends the Edward R. Murrow Program for Journalists.

Natascha Fioretti is a research assistant at the University of Lugano. She's the EJO’s Italian Web Editor and coordinates and promotes EJO events. Bilingual in Italian and German, she earned a degree in Foreign Languages and Literature Studies at the Università Cattolica del Sacro Cuore di Milano and a Master’s degree in New Technology Enhanced Communication for Cultural Heritage obtained at the Università della Svizzera italiana. As a freelance journalist Natascha writes for a variety of print publications.
» Newsroom Management » American Dailies Down 5 Percent