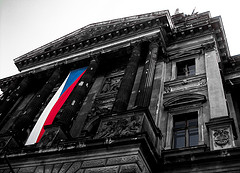 Though contemporary Czech journalism has evolved, journalism students cling to the memories of the First Republic’s great writers, such as Karel Čapek, Karel Poláček, and Jaroslav Hašek.

The Czech journalistic tradition is still admired for the persistence of its earliest innovators – a group who fought during the communist era to create illegally published samizdat magazines despite persecution, denial of education, and the threat of long prison sentences. Many of these reformers, for example the first Czech democratic president Vaclav Havel, are still alive and are now considered to be members of the elite.

Journalists working within state media were hampered by censorship in the first days after the fall of the Communist government. After a week of street protests were neglected by the media and denounced for disrupting public order, journalists rebelled against the establishment and began informing the public about what was happening.

The staff at Czechoslovak Television (ČST) would meet in the garage of the studio complex and formulate their own demands. On November 22, 1989, the ČST staff broadcast six live reports from the protests in Prague. Meanwhile the new political movement, Občanské fórum (The Civic Forum), was established and ČST’s staff claimed their allegiance to the guidelines adapted by the Civic Forum and their support of the general strike. The new era had begun.

Fortunately for contemporary media standards, the existence of the samizdat gave a voice to authors who weren’t permitted to work in an official capacity due to the heavily censored and biased media environment. After the Velvet Revolution in 1989, many of these “illegal” journalists were able to begin working publicly again.

The media scene reacted to the political and social changes in a variety of ways.  For example, some newspapers were renewed and reformatted while others, despite being officially shuttered by the Communist party, were secretly maintained by the samizdat community in an attempt to preserve old traditions.

Other newspapers began from scratch, for example the political and cultural magazine Respekt, which was created almost immediately after the revolution by a group of former samizdat writers.  Other newspapers were transformed from their original formats but remained under the same or similar titles, such as the official communist daily newspaper Rudé právo (roughly The Red Law), which eventually simplified its title to Law after 1989.

Similar to many other countries, tabloid newspapers are the most popular among Czech readers. The tabloid Blesk (Flash) has a daily circulation of 350,000, which makes it the most successful periodical and the workhorse of the media house Ringier, which also publishes Blesk’s competitor  – the newspaper AHA. This is normal practice within the Czech media sphere, when competing outlets are published by one media house. Aside from their two most popular tabloids, the daily papers Lidové noviny and Mladá Fronta DNES both share the same publisher, the Vltava-Labe Press.

In addition to the Czech newspaper industry, the political turn influenced other types of media as well. For example, ČST changed their programming in 1989 and again in 1993 after the separation of the Czech and Slovak Republic. The station then became Czech TV and occupied channel 1 (ČT 1), channel 2 (ČT 2), and even channel 3 before ultimately merging channels 2 and 3 in order to provide more intellectual and specialized programing. Czech TV now has four channels due to digitalization, in addition to an around-the-clock news channel ČT24 and a 24-hour sports channel ČT4 Sport.

Currently public service stations adhere to special laws and councils that control their content and quality, more or less. However when new private TV channels emerged in 1993 and 1994, the Czech viewer experienced a legitimate shock. Suddenly Czechs were showered with American sitcoms and South American telenovelas, not to mention aggressive advertisements and mass commercialism.

New public personas also appeared – for example cold-blooded businessmen like CET 21’s CEO Vladimír Železný, who stated in his application for a broadcasting license that he wanted to start an intellectual station with an emphasis on cultural affairs. TV Nova showed what Železný meant by “cultural” when he chose to air an episode of Baywatch with Pamela Anderson running on a beach in a tiny red bikini.

CET21, owned by the company CME, owns licenses for six TV channels – four in the Czech Republic and two in the Slovak Republic. While TV Nova is a typical commercial medium with a very wide and rigid audience, PRIMA TV (50 percent of which is owned by the Swedish company Modern Time Group) tends to be a bit more fresh and innovative, introducing popular TV formats such as reality shows or original dramas.

Czechoslovak Radio also evolved from its role as a state media outlet to an outlet for public service, a move inspired by the British media system. Contracts for private stations were first allowed in 1991 due to the Act on Radio and TV Broadcasting and the station was later transformed in 1993 into Czech Radio (Český rozhlas, ČRo).

Commercial Internet was first launched in 1993, with the first Czech search engine Seznam.cz launched shortly thereafter in 1996. However the true Internet boom didn’t begin until the year 2000, when traditional media realized they could no longer neglect the medium’s power to attract audiences.

This realization resulted in the development of Internet versions of daily newspapers, which eventually gained a certain amount of sovereignty in subsequent years. In assessing the past decade of development, print media has ceded their once powerful position to mediums with more potential for growth and revenue, i.e. the Internet and audiovisual media.

The media’s positioning within in the Czech legal system is rooted in the Constitution of the Czech Republic and the Bill of Rights, which specifies freedom of the press and rights to privacy for members of the media.

The first ethics code established in the democratic era of the Czech Republic was introduced by the Council of Czech television in 1995.  The code was initiated in response to the belief that after 40-years of communist censorship, the media should remain completely free and without boundaries.

In 1998, the Czech Syndicate of Journalists introduced its first ethics code, followed by the weekly magazine Týden and later by other periodicals including Hospodářské noviny and Mladá Fronta DNES in 2002 and Deníky Bohemia a Moravia in 2004.

While the current culture of ethics in the Czech Republic is satisfactory, the early ’90s can be characterized by a certain level of chaos. During this period of transition, nearly all former communist journalists were forced to leave their jobs and were replaced by young journalists, often in their early 20s.

Today these journalists form the top management of nearly all media outlets in the Czech Republic, meaning many lack the media education and training commonly found in the West. This phenomenon also causes the majority of Czech media outlets to favor right-winged politics, which may for instance cause tension and controversy during public elections.

One could say politicians often use the media for their own purposes, however there exists a tradition of investigative journalism that is adept at uncovering political scandals.

Reports of journalist surveillance began when the Czech minister of finance Miroslav Kalousek publicly admitted to owning a video recording taken during a meeting between the editors-in-chief of the largest newspapers in the Czech Republic.

The men present at the conference, which took place prior to a parliamentary vote requesting a tax increase on the sale of newspapers and books, allegedly were meeting to discuss strategies meant to force minister Kalousek to change his mind about the tax raise.

Afterwards several media moguls declared the secret recordings of journalists to be outrageous and threatened to request intervention from the police. Suddenly Minister Kalousek came forward with an “alibi,” saying the entire stunt was merely a joke. While the background story explaining the editors’ secret meeting is mysterious at best, Minister Kalousek’s actions were unjustified and signal another harsh reality faced by Czech journalists.

Another example of intimidation occurred when Karel Srba, an employee of the Ministry of Foreign Affairs (MFA), went to prison for 12 years after an investigation revealed she had hired an assassin to silence a reporter named Sabina Slonková – who had been writing about corruption inside the MFA. Today Slonková works as a chief-reporter for the news website Aktuálně.cz.

In reviewing this information one can see that within the Czech media sphere there exists a peculiar relationship between the top representatives in media, politics, and business. Reporters Without Borders ranked the Czech Republic 23rd in their Press Freedom Index in 2010, just below Canada and the United States. The situation in the Czech Republic concerning media freedom and transparency is not appalling but there is definitely room for improvement.