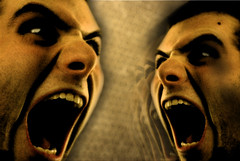 Researchers introduced a special method designed to provide a selection of aggressive and abusive key words while measuring the intensity of their usage in commentaries.

In an analysis of more than 65,000 words used in Internet commentaries, experts selected 900 key words displaying emotional aggression and abuse. Anda Rozukalne, the chair of RSU’s Communication Studies Department explained that the words were then divided into three groups: aggressive, mid-aggressive and very aggressive. Using a specially designed IT program developed by the Institute of Mathematics and Computer Science (University of Latvia), researchers then measured the intensity of the usage of these words.

Research shows that emotional aggression in commentaries follows as a reaction to separate news pieces mostly devoted to politics, political figures or loss in sports.

Overall, the three news media outlets analyzed for this study revealed that aggression levels were quite similar and that sudden increases in aggressive commentary were found to be equally distributed across all three sites. In addition, the study discovered that most of the aggressive commentary found in articles was directed towards the main character in the article, the author, or the media outlet responsible for publishing the article.

This research was conducted with the support of the Latvian Ombudsman’s Office and Friedrich Ebert Foundation. The aggression index used will continue to measure online media content on a monthly basis. In the future there will be a homepage devoted to the index which will also evaluate commentaries on news sites for Latvia’s Russian population.

Liga Ozolina is a PhD student on the Communication Management Program at Turiba University, Riga. She was previously the editor of the EJO's Latvian-language site and has also worked on Diena - one of Latvia's largest daily newspapers - and for various online media outlets. Her academic interests include journalists' professional identity, entrepreneurial journalism, online journalism and new media business models.
» Digital News, Ethics and Quality » Latvia Introduces Internet Aggression Index