“What is the future of local news?” has become a vital and intensely scrutinised question, spurring a multitude of industry reports, academic studies, and news articles, particularly in the US. Recent reports have ranged from an analysis of more than 16,000 news stories in 100 US communities finding that only 56% address critical information needs to a study chronicling the expansion of “news deserts” as a result of the loss of about 1,800 metro and community newspapers since 2004 to research investigating how the hyperlocal news site The Ohio County Monitor used existing communication spaces (“liars tables,” society columns) to engage with local readers in small-town and rural Kentucky.

What Will Be The Fate Of Local Newspapers?

The fate of local newspapers in the UK has been similarly interrogated. As in the US and other countries, UK local newspapers have, for the last few decades, seen declining revenues, readership numbers, and newsroom personnel. Local newspapers, many of which continue to derive the bulk of their revenues from their print products, must also compete with US-based platform companies, such as Google and Facebook, for online advertising revenues.

Consolidated ownership has also had an acute effect, with national companies such as Johnston Press and Reach (formerly Trinity Mirror) emphasising digital-first and digital-only distribution to enhance their reach while incurring low distribution costs, in some cases serving multiple titles through a single hub, and also resulting in the closure or consolidation of some local titles, according to a 2018 Mediatique report. In response, the UK has seen a wave of hyperlocal news sites emerge to fill the void, from the community-led media cooperative The Bristol Cable to the Scottish independent investigative media cooperative The Ferret.

In this shifting media environment, local news organisations remain uniquely situated to identify effective ways to engage with their communities. This potential formed the basis for the Oct. 15 News Impact Summit in Cardiff, Wales, organised by the European Journalism Centre and sponsored by the Google News Initiative. With the theme “Local News & Community Engagement,” the free event offered an array of talks and breakout sessions focused on examples of how local newsrooms, in multiple countries, are developing new products and routines to better inform and connect with their communities.

A Need For A New Model To Support Local News

The summit opened with an address from Megan Lucero, director of The Bureau of Investigative Journalism’s Bureau Local, a collaborative investigative network launched in March 2017. The Bureau Local includes members representing regional and national news organisations, as well as other local journalists, hyperlocal bloggers, technologists, and citizens who have access to shared data and other resources about issues ranging from homeless deaths to domestic violence to county council finances, which they can localise to their communities. 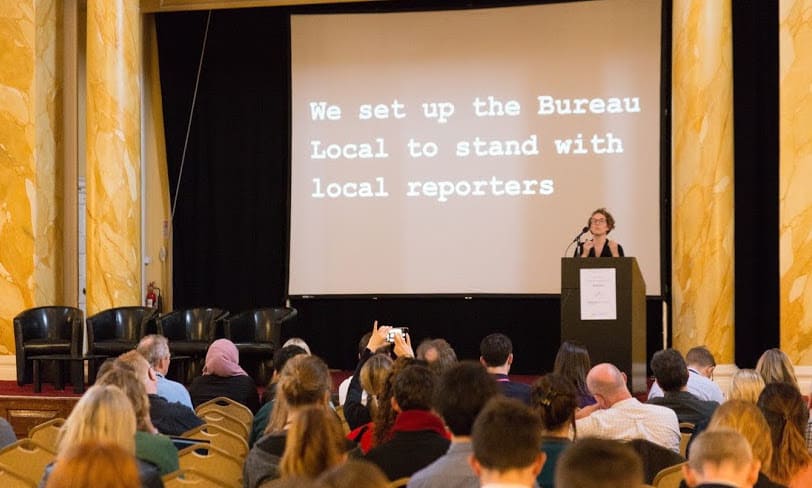 Lucero emphasised the need for new models to ensure local journalists can continue to seek truth and pursue public-interest reporting. Lucero recalled her previous experience as data editor at the Times and Sunday Times, where journalists reported data but did not necessarily share the stories of how these issues affected people’s lives.

“[It’s] not simply to just collect information; it’s about telling it,” she said.

When looking at current models for local news, Lucero highlighted three key trends: 1) Traditional models are collapsing, 2) digitised information changes the depth and breadth reporters can offer on issues, and 3) access to that information and determining what to do with it can be overwhelming for already resource-strapped local journalists.

To address these needs, the Bureau Local, inspired by other collaborative efforts such as the Panama Papers, aims to increase the amount of accountability reporting at the local level. Lucero assured the crowd, though, that the Bureau Local is not a parachute operation.

“We’re not coming in to fix or save local news but to stand by their side,” she said.

Now, the Bureau Local has grown to more than 200 journalists and 800 total members. They’ve also learned important lessons: Accountability journalism requires participation from a variety of players; “acts of journalism” look different than in the past; guiding journalists to useful, accessible information can reap significant benefits; and local media must learn how to reach audiences in new ways. These strategies can result in new models for story-finding, storytelling, and money-making, Lucero said.

What Are The Most Significant Challenges For Local News Organisations? 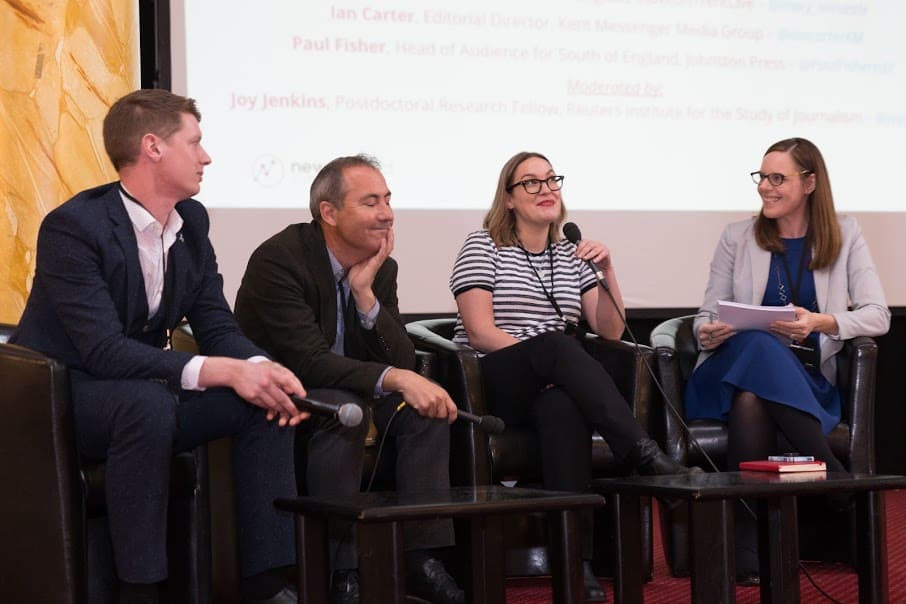 The summit also included a panel conversation, The Digital Transition of Local News, with representatives from UK local newspaper publishers, including Ian Carter, editorial director for Kent Messenger Media Group; MaryAnn Astle, executive editor (digital) of Reach’s StokeonTrentLive; and Paul Fisher, head of audience for Johnston Press South of England. The panel was inspired by a recent Reuters Institute for the Study of Journalism report focused on how local news organisations are adapting their production, editorial, and commercial strategies in the digital environment.

Panelists discussed the most significant challenges and opportunities facing their news organisations, including the quest for scale in audience reach; efforts to centralise production of digital articles and videos; the functions of social media, particularly Facebook, for news distribution, audience engagement, and story tips; differences in audiences in print and online; ways local newspapers aim to remain involved in their communities, such as events; and changes to business models, such as the incorporation of paywalls.

Local newspapers have unprecedented access to growing audiences, although journalists must continually learn new digital tools and skills to keep up with changing audience consumption trends.

For the panelists, the movement to online news distribution has significantly changed their approaches to news production, immediately posting breaking news online, continually assessing analytics to ensure they are reaching the right audiences at the right times, and considering the best strategies for using social media to post articles and engage with readers.

As a result, local newspapers have unprecedented access to growing audiences, although journalists must continually learn new digital tools and skills to keep up with changing audience consumption trends. Even so, as the panelists emphasised, local journalists must remain focused on producing quality journalism and finding innovative ways to engage with their readers, particularly through social media channels and in-person interactions. For more on the panel, see these dispatches from Behind Local News and One Man & His Blog.

In the keynote discussion, Andrea Faye Hart, co-founder and director of community engagement for City Bureau, described how the Chicago-based journalism lab, founded in 2015, has focused on empowering locals to tell their own stories, particularly to provide counter-narratives to the local news coming from primarily white, male urban newsrooms, she said. The first year of the City Bureau focused on reporting about policing and community safety, particularly police-involved shootings. City Bureau also emphasises community engagement, building relationships based on accountability and trust so they are not just sharing power but “eradicating dominance,” Hart said. The City Bureau hosts a Public Newsroom every Thursday, a “brave space,” Hart said, during which journalists and the public can gather to discuss local issues, share ideas, and learn about how to report stories. 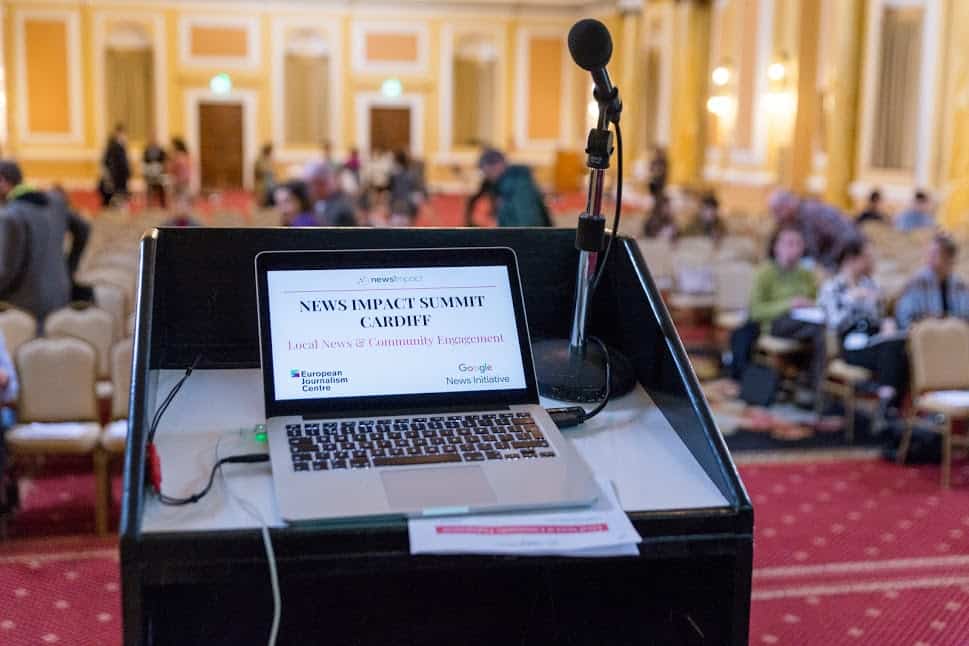 Ultimately, Hart said, the success of the City Bureau demonstrates that people are hungry for a new kind of journalism that is more democratic, open to listening to community members, publishes at a slower pace to delve into issues, and not only addresses problems but also presents solutions.

“We need to humanise the institution of journalism as a whole,” Hart said.

A final wrap-up panel highlighted key takeaways of several smaller sessions, including the need to continually show up in communities to build trust, the value of listening to and respecting readers, bringing audiences into journalistic processes so they can better understand them, continually asking who your readers are, defining your values as an organisation and communicating them, and continuing the conversation with audiences so it doesn’t stop on the page.

Journalists and the public can gather to discuss local issues, share ideas, and learn about how to report stories.

The summit highlighted the range of outlets focused on producing local news coverage, from longstanding local newspapers to hyperlocal websites to collaborative start-ups, addressing both their common aims and diversified approaches to editorial content, digital growth, business models, and audience relationships. Some of the weightier challenges facing local news were less heavily addressed – just days before the summit, for example, Johnston Press put itself up for sale, putting the future of hundreds of local titles in question — as well as other concerns of how to ensure the financial sustainability of local news. Even so, speakers seemed united in their desire to continue to develop new approaches to delivering useful and engaging content to local readers.

You may also be interested in The Future Of Local News.

Dr. Joy Jenkins is a postdoctoral research fellow at the Reuters Institute for the Study of Journalism. She is using qualitative methods to study how local and regional newspapers in four European countries are adapting to changes facing the news industry. Jenkins completed her doctorate in journalism at the University of Missouri in 2017. Jenkins’ other research interests include the role of local media in facilitating civic engagement, gender and media, and magazine journalism. At the University of Missouri, she taught courses in news writing and reporting, magazine reporting, qualitative research methods in journalism and mass communication, and media literacy. Prior to pursuing her doctorate, Jenkins received a Master of Science in media management from Oklahoma State University and a Bachelor of Arts in journalism from the University of Oklahoma. She also worked as a journalist in Oklahoma for eight years, serving as copy editor at Oklahoma Gazette, an alternative newsweekly in Oklahoma City, and senior editor at TulsaPeople Magazine, a city magazine in Tulsa. For more information about Dr. Jenkins and her research, please visit her Google Scholar Profile or her personal website. Joy can be found on Twitter under @joyjenkins.
» Ethics and Quality » News Impact Summit Cardiff Highlights The...