Five Things You Need To Know About Journalism’s Future 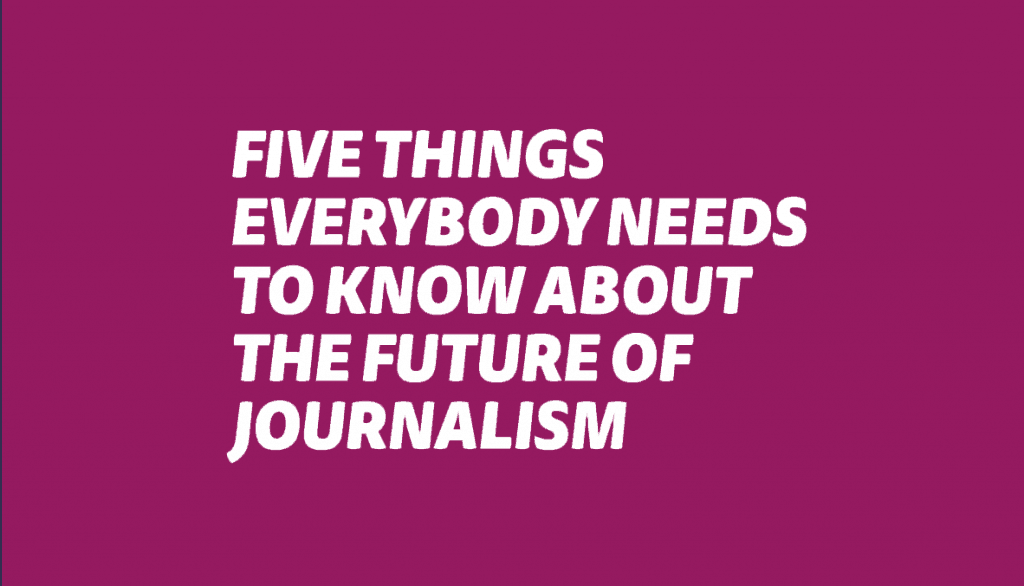 Journalism is becoming more important but less robust, according to a new report from the Reuters Institute for the Study of Journalism. The report, co-authored by Rasmus Kleis Nielsen and Meera Selva, identifies five trends about the future of journalism, and examines their potential impact upon society.

In their report, “More Important, But Less Robust? Five things everybody needs to know about the future of journalism”, Nielsen and Selva highlight risks posed by growing information inequality, struggling journalism business models, and the role of social media platforms. They also underlines that digital media drive more diverse news diets and argue that, despite the challenges, the best journalism is better than ever.

The five global trends are based on recent research conducted at the Reuters Institute. They reflect changes to the way people access news, transformations in professional journalism and the business of news, as well as changing political environments in some parts of the world.

5 things everybody needs to know about the future of journalism

In summary, the following five facts are crucial to know these days:

The report argues that these five trends will play out – with variation due to cultural, economic, political, and social context – across the globe in years to come.

Commenting on the report which was presented for the first time at the World Economic Forum 2019 in Davos, Rasmus Kleis Nielsen said: “Digital media bring many challenges for journalism and for our societies, but also very real opportunities for both news media and the public. The challenge for journalists and news media is to continue to adapt to the digital media that people all around the world are eagerly embracing at the expense of print and broadcast, and build a profession and a business fit for the future.”

Meera Selva added that “the role of journalism in many different cases, including the #MeToo movement, in confronting corruption amongst public officials, and in fuelling public debate around platform companies’ power and privacy practices, underline the continued relevance of investigative reporting.”

The full report can be found on the website of the Reuters Institute for the Study of Journalism.

Felix Simon is a journalist and researcher and a graduate of the University of Oxford’s Internet Institute (OII). He is the former acting editor of the European Journalism Observatory and works as a research assistant at the Reuters Institute for the Study of Journalism. His writing on tech, politics, and the media has appeared, amongst others, in the “Frankfurter Allgemeine Zeitung”, “Die Welt” and “Der Freitag”, the Swiss “NZZ” as well as in the “Telegraph” and “The New European”. He has published in journals such as “Journalism Studies” and “Transformative Works and Cultures”. His research focuses on political communication in the digital age, big data in politics and the entertainment industry, as well as the changing nature of journalism and the media in the 21st century. He also takes a side interest in populism and the future of disinformation. He tweets under @_FelixSimon_.
» Digital News, Recent, Research » Five Things You Need To Know...