“Re-Polonisation” back on the agenda for Poland’s private media

It is now five years since the conservative populist Law and Justice party (PiS) came to power in Poland, and in this time the media system has been subjected to numerous far-reaching changes. Public TV and radio have become “national media”, meaning that they are now strongly supportive of the government. Since 2015, hundreds of journalists and editors working for the public broadcasters have been dismissed and replaced by “politically approved” ones. In the wake of the recent presidential election, won by PiS nominee Andrzej Duda, the situation looks set to deteriorate still further as the government has declared it intends to take steps to reduce foreign ownership of Polish media companies. The question inevitably arises: will Polish independent media outlets end up suffering the same fate as their Hungarian counterparts?

The first serious blow to media freedom in Poland was dealt after the two 2015 elections. In May, PiS candidate Andrzej Duda won the presidential election. Five months later, the party gained control of both houses of the Polish parliament (the Sejm and the Senate). Soon after this, a number of amendments were made to the media law. As a result, several hundred employees of the public broadcasters lost their jobs overnight, with board members being the first to go. What had been a reasonably diverse media system noticeably changed. “Pluralism was eliminated from the debate in public radio and TV and they seem to be dedicated only to promoting the ‘achievements’ of the government,” in the words of Piotr Sula, a political scientist at Wrocław University.

Having subjugated the public media, the ruling party announced its plan to re-Polonise the private sector. PiS leaders regularly claimed that foreign companies – especially German ones – owned too high a stake in the Polish media and that this was having a harmful effect. For several months, the term “re-Polonisation” dominated the public debate, before it was dropped and replaced by a new term: de-concentration. One possible explanation for this sudden switch is that for as long as Poland is a member of the European Union (which it has been since 2004), reducing German ownership of the Polish media would be problematical to say the least. During PiS’s first term of office (2015-2019), no such act was passed, and the ruling party simply bided its time. However, during this period Poland’s ranking in RSF’s Press Freedom Index still fell from No.18 to No.59.

Having been purged of critical and respected journalists, the “national media” (Polish Radio, Polish Television, Polish Press Agency) were forced to focus on domestic news and to treat foreign news stories as if they were simply an exercise in point-scoring. Poles were encouraged to believe that they were under threat from a “rotten Europe”, “morally decayed Scandinavia”, “secularised Germans” or a “burning France, full of emigrants” – as Jędrzej Morawiecki, a media scientist and sociologist at Wrocław University, points out. In Morawiecki’s opinion, these negative images owe a lot to the Russian media’s propagandistic coverage of European affairs.

An experienced journalist working for Polish Radio – who prefers to remain anonymous because staff have been forbidden to take part in interviews – paints an alarming picture of how the news agenda is set: “Editors and reporters receive daily phone calls giving them ‘advice’. One of the most frequent sentences uttered by our managers is: You have to defend the Polish raison d’état, which in their minds means the PiS raison d’état. After months of this kind of brainwashing, most editors are afraid even to suggest stories that are critical of the government or are simply not in line with PiS propaganda”. This is why the national media dismissed as “anarchy” the protests in the United States triggered by the police killing of George Floyd – to justify the statements and actions of Donald Trump, a great ally of Poland’s leaders.

Private media are still seen as being independent and credible, though they do face some obstacles. “It is becoming noticeably more difficult to get information out of national institutions,” says a Radio Zet reporter, who prefers to speak off the record. “The public media are clearly treated more favourably and on many occasions my questions went unanswered until they appeared in official statements e.g. from the prosecutor’s office,” she says. This approach – withholding information from independent media and refusing to answer questions – is used by state institutions to evade critical scrutiny and avoid negative publicity. It is hard to believe but one of the key Polish ministries, the Ministry of National Defence, still doesn’t have a spokesperson. Journalists usually have to make do with vague responses sent by email or comments from the press department. For TV and radio reporters, the impossibility of obtaining any video footage or audio means that they have nothing to illustrate their reports with and often end up dropping the story. A journalist who works for TVN (one of the two biggest private TV stations in Poland and owned by the US media company Discovery) gives an example of how public institutions seek to control the narrative: “After the interview with the police officer I was asked to sign two documents: one about safety measures taken in connection with Covid-19 and the other stating that I agreed to submit the entire news item to pre-release screening. My jaw dropped. Of course, we ignored that.” 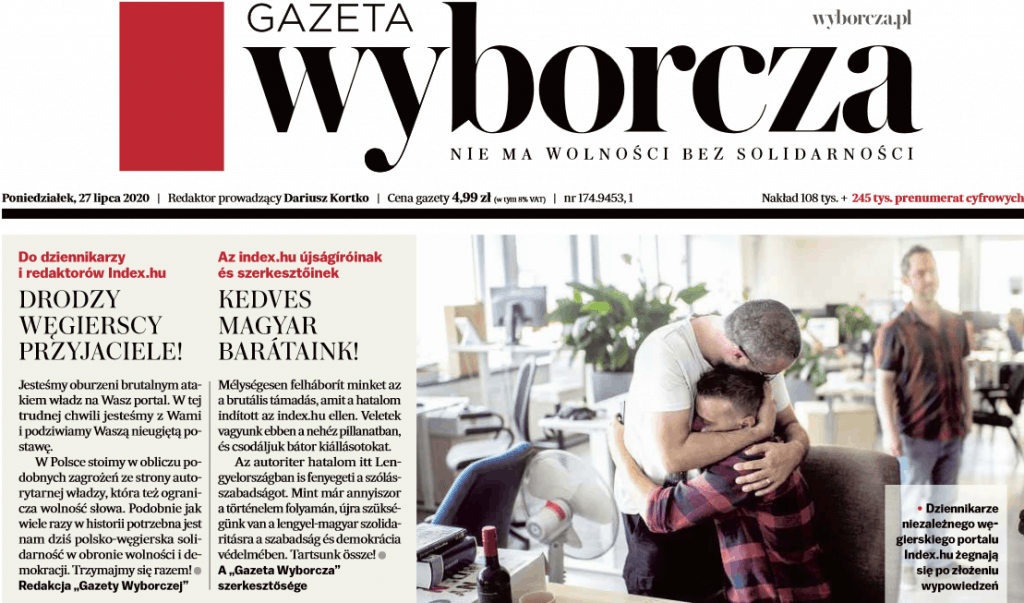 But for Poland’s ruling party, media enemy number one is the country’s leading independent daily, Gazeta Wyborcza. There are two main reasons for this. Firstly, the popular broadsheet has been engaged in an ideological battle with PiS almost from the moment when the party was founded. Gazeta Wyborcza admitted as much in 2005, when PiS came to power for the first time (then in coalition with two other parties, an arrangement that only lasted for two years). Secondly, Gazeta Wyborcza belongs to the Polish company Agora, in which 11.49% of shares are held by the New York-based Media Development Investment Fund (MDIF), which receives support from George Soros’s Open Society Foundations. This is why, after PiS formed a majority government for the first time in 2015, it stopped state-run companies from advertising in the daily, effectively depriving Agora of millions of euros in revenue yearly. The advertising revenue was reallocated to media outlets that had proved their loyalty to PiS and continue to support the government. The ruling party’s antipathy towards Agora is so great that when in March this year the prime minister’s office issued a statement about the closure of schools to the press, Gazeta Wyborcza was left off the list of recipients.

PiS leader Jarosław Kaczyński says that re-Polonisation is now on the cards again.

The term “re-Polonisation” enjoyed an unexpected revival during this year’s presidential election campaign. After PiS lost its majority in the Senate in the 2019 parliamentary elections, it became all the more important for the party to secure the re-election of its ally Andrzej Duda to the presidency in 2020. It was clear that the campaign would be a tough one and that the ruling party would pull out all the stops to ensure that Duda received more favourable media coverage than his main rival, Rafal Trzaskowski. There is ample evidence that public media devoted overwhelmingly more airtime to Duda’s campaign and showed him in a much more positive light than Trzaskowski.

The most controversial event of the campaign was when the top-selling tabloid Fakt, owned by the Swiss-German-American company Ringier Axel Springer Polska (RASP), published a cover story about the president’s pardoning of a paedophile. The possibility that the story might damage Duda’s e-election chances proved to be the trigger for further calls for re-Polonisation. The president accused Fakt of meddling in the election, asking “Do the Germans want to choose the Polish president?”, and the deputy prime minister on his Twitter account appealed to Poles “not to subscribe the cesspit”. As soon as the election result had been announced, PiS party leader Jarosław Kaczyński said that re-Polonisation regulations would be introduced during the current Sejm term.

Analysts say that such a possibility cannot be ruled out. According to Piotr Sula, “Plans to ‘re-Polonise’ private media would mean that the mechanism of control exerted over public media would also be applied to private media. Private media that criticise the government already suffer from a lack of advertisements from state-owned companies, and private businesses might also consider it risky to be advertised by enemies of the ruling party”. It is hard to predict exactly what might happen next, but Jędrzej Morawiecki believes that “limiting foreign companies’ shares in Polish media would mean a reduced plurality of viewpoints and a hardening of the divide between state and oppositional media”.

However, some journalists interviewed for this piece were sceptical of the re-Polonisation plans, which if implemented could be used to limit the US company Discovery’s stake in the private TV station TVN. The Polish government is unlikely to want to risk falling foul of the US administration and losing the support of Donald Trump, especially at a time when it has few other prestigious allies. It is possible that the term “re-Polonisation” is just a catchphrase aimed mainly at the domestic audience and in particular at supporters of the ruling party. The message it conveys it not just about regaining media ownership from foreign companies but – even more important – about handing it over to Polish businessmen with connections to the government. And in this respect we could see a pattern emerging similar to recent developments in the Russian and Hungarian media.

This article is also available in German and Polish.

If you liked this story, you may also be interested in Poland’s New “Journalism of Identity”

Adam Szynol is a senior lecturer in the Institute of Journalism and Social Communication at the University of Wroclaw. His main research field is the regional daily press in Poland. He is also interested in local media and transnational trends such as globalisation, digitalisation and defragmentation and the effect these have on the media and the journalistic profession.
» Latest stories, Media and Politics, Press Freedom » “Re-Polonisation” back on the agenda for...