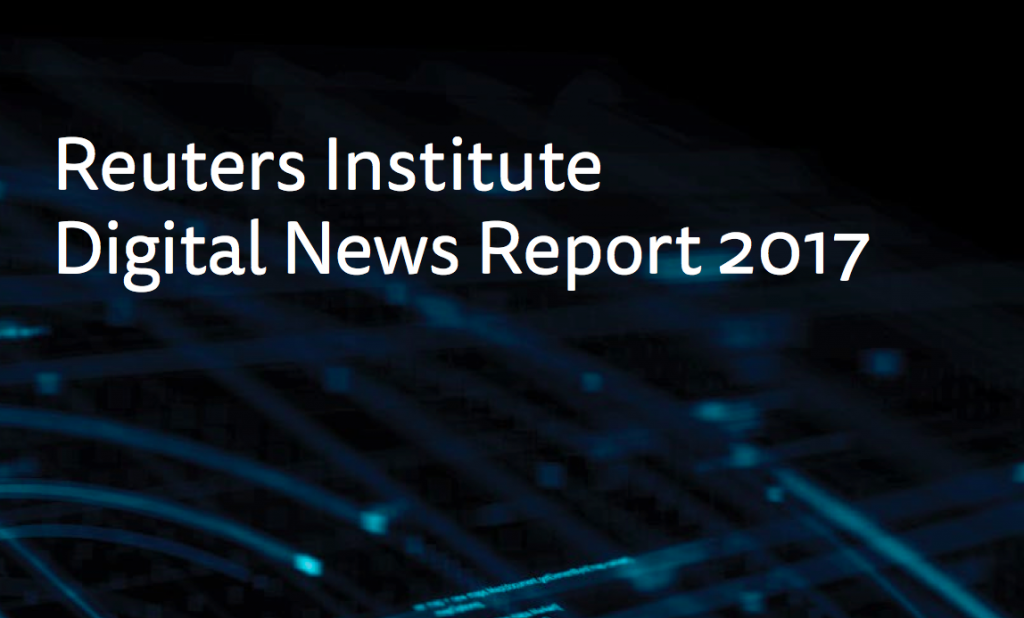 The internet and social media may have exacerbated low public trust in the media and ‘fake news’, but in many countries mistrust is driven by deep-rooted political polarisation and perceived mainstream media bias, the Digital News Report 2017 reveals.

The report, based on a survey of 70,000 people in 36 countries, also finds that social media ‘echo chambers’ and ‘filter bubbles’ exist for some, but – on average – users of social media, aggregators, and search engines experience more media diversity than non-users.

The economic outlook for most media companies remains extremely difficult, but there are reasons for optimism. The growth of ad-blocking has stopped while the number of online subscriptions for news and donations to media organisations are increasing in some countries.

Digital News Report focus groups indicate that more users might be willing to pay for news in future, if content is sufficiently valuable, convenient, and relevant.

1. Growth in social media for news is flattening out in some markets, as messaging apps that offer more privacy become more popular. The use of WhatsApp for news is starting to rival Facebook in a number of markets including Malaysia (51%), Brazil (46%), and Spain (32%)

2. Only a quarter (24%) of our respondents think social media do a good job in separating fact from fiction, compared to 40% for the news media. Qualitative data suggest that users feel the combination of a lack of rules governing social media, and viral algorithms encourage low quality and ‘fake news’ to spread quickly.

3. There are wide variations in trust across the 36 countries. The proportion that says they trust the news is highest in Finland (62%), but lowest in Greece and South Korea (23%).

4. In most countries, the survey revealed a strong connection between distrust in the media and the media’s perceived political bias. This is particularly true in countries with high levels of political polarisation like the United States, Italy, and Hungary.

5. Almost a third of our sample (29%) say they often or sometimes deliberately avoid the news. For many, this is because it can have a negative effect on mood. For others it is because they can’t rely on news to be true.

6. Mobile use continues to grow, outstripping computer access for news in an increasing number of countries. Mobile news notifications have grown significantly in the last year, especially in the US
(up 8 percentage points over 2016), South Korea (+7), and Australia (+4), becoming an important new route to content. The growth of mobile news notifications has boosted news apps.

7. In a related development there has been a significant growth in mobile news aggregators, notably Apple News, but also Snapchat Discover for younger audiences. Both have doubled usage with their target groups in the last year.

8. Smartphones are now as important for news inside the home as outside. More smartphone users now access news in bed (46%) than use the device when commuting to work.

9. Voice-activated digital assistants like the Amazon Echo are emerging as a new platform for news, already outstripping smart watches in the US and UK.

10. In terms of online news subscriptions, we have seen a very substantial ‘Trump bump’ in the US (from 9 to 16%) along with a tripling of news donations. Most of those new payments have come from the young – a powerful corrective to the idea that young people are not prepared to pay for online media, let alone for news.

11. Across all countries, just over one in ten users (13%) pay for online news but some regions (Nordics) are doing much better than others (Southern Europe and much of Asia).

12. Ad-blocking growth has stalled on desktop (21%) and remains low on smartphones (7%). Over half say they have temporarily disabled their ad-blocker for news in countries like Poland (57%), Denmark (57%), and the United States (52%).

13. There is new evidence that news brands may be struggling to cut through on distributed platforms. An experiment tracking more than 2,000 respondents in the UK, found that while most could remember the path through which they found a news story (Facebook, Google, etc.), less than half could recall the name of the news brand itself when coming from search (37%) and social (47%).

14. Austrians and Swiss are most wedded to printed newspapers, Germans and Italians love TV bulletins, while Latin Americans get more news via social media and chat apps than other parts of the world.

You may also be interested in Social Media, Trust and Polarisation: Digital News Report, 2017