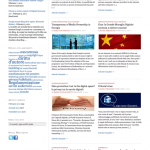 Most everyone has experienced the joy of sifting through an inbox flooded with spam without ever knowing who sent it.

We’re so used  to the routine by now we no longer question it, just simply delete the emails and problem solved. Yet according to a recent conviction in the Milan Court, spamming can be a crime.  The CEO and data processing manager of a website called Buongiorno Vitaminic were both sentenced to nine months in prison for having spammed 180,000 users.

The story is relatively simple. In 2001, the website fuorissimo.com asked the Buongiorno Vitaminic  (BV) firm to manage the database of its newsletter, which had about 450,000 subscribers.  After the termination of the contract between the two companies, BV continued to send newsletters publicizing its own services to about 180,000 users of the fuorissimo site who had not agreed to receive the notices.  As a result, the two BV managers were convicted of illegally handling personal information.

The story itself manages to disprove notions of the Web as a virtual no-man’s-land, particularly if you consider the news source: a new Italian website (online for only a few months) dealing with comparative media law in Europe.

MediaLaws, the ambitious project conceived by Oreste Pollicino, a professor of comparative law at the Bocconi University of Milan, is characterized by its international nature, the fact that content appears in more than one language (at the moment contributions are in Italian, French and Spanish), and that articles are contributed by academics, professionals and students.

The website is managed by an impressive group of people: a professor of intellectual property law and European law from London City University, a scientific committee, an editorial committee, and a solid group of young foreign correspondents.

Their aim is to observe, understand and explain what’s happening in the world of media on a daily basis – in Europe as well as countries like the U.S., Chile and Brazil – from a juridical and regulatory point of view by comparing different situations.

This is no simple task, yet it grows increasingly necessary at a time when the rapid development of technology, the prevailing tendency for modes of communication to merge, and the strength and distribution of the Web often make it difficult to clearly identify the juridical system applicable to individual forms of media.  Which, naturally, results in a plethora of legal problems.

At first glance MediaLaws might appear to be a site intended for a small group of insiders, but this is not the case.  The subjects addressed vary from freedom of the press in Hungary to the effects of a video love letter (“Hi, I am Giovanni and I have a dream: to kiss Gaia, my neighbor”), published widely on major social networks not long ago.

It is a fresh, interesting new project that views the Web as a place for critical reflection and in-depth investigation, but also as a means of communication that presents problems and weaknesses which require management through exhaustive knowledge of the medium.

MediaLaws brings to light the enormous potential within universities for innovative and far-reaching projects that will increase the appreciation for multidisciplinary studies and provide valid topics for journalists to reflect on and investigate.

Natascha Fioretti is a research assistant at the University of Lugano. She's the EJO’s Italian Web Editor and coordinates and promotes EJO events. Bilingual in Italian and German, she earned a degree in Foreign Languages and Literature Studies at the Università Cattolica del Sacro Cuore di Milano and a Master’s degree in New Technology Enhanced Communication for Cultural Heritage obtained at the Università della Svizzera italiana. As a freelance journalist Natascha writes for a variety of print publications.
» Digital News, Ethics and Quality » MediaLaws: A Comparative Media Law Blog