How Media In Greece Reported The Migration Crisis 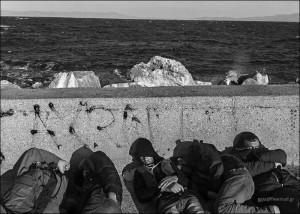 Europe’s migration crisis has transformed Greece into something more than just a transit country. Countless journalists from media all over the world have travelled to the islands and the borders to witness the arrival of nearly 700,000 migrants and refugees, an increase of 750% on 2014.

Unsurprisingly, the issue remains high on the agenda of Greek newspapers, despite important domestic political stories competing for the media’s attention.

Reporting on the crisis has not escaped journalistic bias and political affiliations, according to my research into coverage in two major Greek national newspapers. As a result two fundamentally different points of view of the crisis, and the EU’s role in solving it, have emerged.

The ongoing research looked at the conservative broadsheet, Kathimerini  and left-leaning cooperative Efimerida ton Syntakton. Articles about migrants and refugees published in these two newspapers in June and September 2015 were examined.

The coverage by the two papers generally reflected their respective political positions. Efimerida ton Syntakton took a more humanitarian approach. Most of its domestic stories emphasised that people were refugees and focussed on their personal stories,  as well as their hopes and dreams for a better future.  The newspaper also published many pictures depicting the victims of the crisis. The cooperative newspaper tried to give an overview of the crisis focusing on personal stories and testimonies.

The conservative newspaper Kathimerini – with a few exceptions – reported on the enormous influx of people in a more detached way. It emphasised the numbers of the migrants and refugees, using statistics and facts from various sources.

Many of its articles focussed on the impact of this phenomenon upon Greek society, as well as the cost. For example, there were stories regarding the increasing price of accommodation, the difficulties that local authorities were facing in their efforts to handle the influx, or the sanitary issues that emerged for local communities. Evidence of bias against the refugees can be traced in some stories. For example there was a story that – despite statements to the contrary by doctors – Greeks should be concerned about possible infectious diseases and epidemics brought by the refugees. Other stories emphasised the frustration caused to local communities due to the ‘downgrading’ of areas used by the refugees as temporary shelters.

In September, Greece was – for the second time in nine months – heading to elections. The country had just survived a divisive referendum and at the same time was struggling to cope with financial controls. Yet in early September the drowning of Aylan Kurdi and the photograph of his lifeless body acted as a catalyst for Greek media to rapidly increase the number of stories about the crisis.

In the case of Efimerida ton Syntakton, the photo of dead Aylan was published on the front page. It also appeared on the inside pages alongside the title “This is your Europe”.

After that, the number of positive humanitarian and domestic stories quadrupled in Efimerida ton Syntakton, (compared to June). The newspaper continued throughout the month to cover the crisis in a compassionate and sympathetic way, with the same intensity.

Humanitarian pieces were mostly focused on the migrants’ journeys and the way they were treated by the authorities, their living conditions, emotions and the volunteers who were helping them. The stories also highlighted the injustices (allegations of racist attitudes and exploitation) and gave refugees a voice to describe what they had been through. Aylan became a reference point for the newspaper, which in subsequent similar incidents (drowning of children) used headlines such as “Four other Aylans”.

On the other hand, the conservative newspaper Kathimerini chose not to publish the photo of Aylan on the front page. A similar attitude was recorded in newspapers in Poland, Czech Republic, Latvia and Ukraine according to a recent study by EJO. However, a story on the inside pages of Kathimerini featured the front page of a foreign newspaper with the Kurdi photo. This inconsistent attitude was explained in another article published in Kathimerini, in which two journalists debated whether the photo should be published.

The journalist who argued against the publication said the photo would nourish morbid curiosity and that its powerful message had been cancelled by its continuous appearance in social media.

From this event onwards, however, references to the refugee crisis doubled (in comparison with June) on the news pages of Kathimerini.  However, the research did not record any significant change in the newspaper’s approach to the issue. Most of the its humanitarian and domestic stories – with some important exceptions of sympathetic stories – were negative towards refugees. These included reports about fears about the economic impact on tourism for the islands, protests and concerns about the cost of hosting migrants and refugees.


The reintroduction of border controls by Germany (13th September) and the EU summit seeking European co-operation (23th September) also provoked contradictory reactions in the Greek press. An analysis of EU-related stories in Efimerida ton Syntakton (June and September) showed a consistently negative attitude towards the policies of European countries towards the refugees.

The articles directly accused Europe of hypocrisy and total failure in trying to tackle the immigration crisis. The decisions taken in the EU summit regarding the relocation of refugees were mocked, and the EU blamed for playing with the lives of the refugees.

However, right-leaning Kathimerini chose a more neutral approach. Its EU-related stories mostly reported statistics relating to the ways in which Europe was trying to handle the large waves of refugees and immigrants. As for the September 23 summit, Kathimerini adopted a more positive position, stating that Greece would be able to relocate more refugees after Hungary dropped out of the programme.

According to the latest report by UNHCR, Greece is by far the largest single entry point for new sea arrivals in the Mediterranean and so far 660,700 migrants and refugees have arrived in Greece.


Behind these breathtaking numbers there are people fighting to escape a war and trying to build a better future for their families. They have stories to tell and Europe has to listen carefully if it really wants to provide a viable solution for them and for its members. Foreign media from all over the world are covering the crisis with correspondents and experts. Greek newspapers must also be active and present at this critical point of history and they better have their stories right.

Lambrini Papadopoulou is a Greek journalist and a PhD Candidate at the Department of Communication, Media and Culture at Panteion University of Athens, Greece. Her thesis is about alternative media business models and media cooperatives. Her academic interests are focused on radical journalism, alternative media business models, media crisis, etc. She has worked as an independent researcher for various EU media projects and her work has been published in Journalism Studies.
» Media and Politics, Short stories » How Media In Greece Reported The...