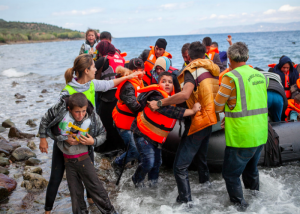 Western European newspapers became significantly more sympathetic towards migrants and refugees immediately after photographs of a drowned boy on a Turkish beach were published at the beginning of September, but within one week most had reverted to their original editorial position. By the end of the month all were less positive than at the beginning.

Most newspapers in Eastern Europe and Baltic States did not publish the photographs and barely covered the story, according to a study of recent media coverage of the migration crisis.

The first detailed analysis of how newspapers in eight European countries reported the movement of nearly 750,000 people across the Mediterranean to Europe this year, revealed distinct national trends, but also political bias in some newspapers that transcended national boundaries.

It found that newspapers in Western Europe were generally more compassionate towards the plight of migrants and refugees, compared to Eastern European and Baltic countries which remained generally “negative, unemotional and anti-EU”.

The events studied were: the photographs of the body of three-year old Aylan Kurdi, (2 September); the day Germany introduced border controls (13 September); and the EU summit aimed at agreeing a common European approach to the crisis (23 September).  Six time frames were examined – two days before and two days after each event. Print, rather than digital, editions of newspapers were chosen as they were more comparable across the eight countries.


Newspapers in Western Europe (Germany, Italian, Portugal and UK) devoted more space to the crisis and covered it in more detail.  All countries in this group published the moving photographs of Aylan Kurdi’s body (apart from one German newspaper, Frankfurter Allgemeine Zeitung).

In Germany, Italy and Portugal positive humanitarian stories about migrants increased three-fold immediately after the photographs were published. In the UK the number of positive humanitarian stories across the three newspapers studied also increased, but by less, from 6 positive stories in the two days before the 2 September photographs, to 13 positive stories in the two days after the 2 September (plus two objective).

However in all four of these countries the number of positive humanitarian stories had decreased nearly to the level they had been before the photographs by the 11/12 September. This demonstrates that the surge in sympathetic coverage after the photographs did not signify a long term shift in media opinion, but appeared to be, as some analysts had suspected, a short-term, emotional reaction to Aylan Kurdi’s story.

Newspapers studied in Eastern European and Baltic countries devoted significantly less space to the crisis. Articles in these countries (Czech Republic, Poland, Latvia and Ukraine) generally focused on policy (either domestic or European) rather than humanitarian issues and tended to be more negative, especially against the EU. Only three newspapers of the 12 in this group published the Kurdi photographs and some criticised Germany and the EU for being “too emotional” over the crisis. One notable exception to this trend was Poland’s centre left daily, Gazeta Wyborcza. The Gazeta published positive stories and also the photos of Kurdi – but only on page 11 and with the title ‘The photo that has shaken Europe’.

None of the Latvian newspapers in the study published either a photograph of the little boy’s body, or even mentioned the story, apart from one comment stating that children are often used as a powerful propaganda tool. Liga Ozolina, editor of the Latvian EJO website, said the overall attitude towards migrants and refugees in the Latvian papers was negative. “There were three prevailing views used in the public debate: economics, cultural differences and barriers – as most migrants come from cultures and religions we don’t associate with – and also the fear of another failure of state integration policy. We already have an example: after more than 20 years of independence Latvia’s Russian minority has not integrated, so why believe that this time it will be different?”

Only one Ukraine newspaper published the Kurdi photographs. Halyna Budivska, of the Ukraine EJO, said Ukrainian articles about the crisis were mostly unemotional and neutral. Few articles covered the story in depth or analysed the situation in detail. “Humanitarian pieces were mostly focused on the migrants’ journeys and treatment towards them by the authorities. Living conditions and emotions of migrants were presented to a much lesser extent,” Budivska said.

Positive articles about the domestic impact of migrants and domestic policy towards them also increased in Western European newspapers immediately after the publication of the Kurdi photographs. However, as with humanitarian positive stories, the increase was short-lived. This pattern was especially noticeable in the UK and in Portugal.

In UK newspapers the number of ‘domestic positive’ articles (eg: ’we must take more in’ ‘we are not doing enough for them’ ‘the government should do more to help’ etc) increased from zero in the two days before the Kurdi photographs, to seven in the two days after, but had reverted back to only two positive stories one week later, and down to zero two weeks later (24/25 September).

“David Cameron’s stance over the EU, and over migrants/refugees was heavily covered early in September,” said Caroline Lees, editor of the English EJO website and a researcher at the Reuters Institute for the Study of Journalism.  “When his position softened in the days after the Kurdi pictures (he announced Britain would take 20,000 Syrian refugees over five years on the 7 September), the media generally approved. However this did not last long.”

In Portugal, the number of ‘domestic positive’ articles went from zero in the two days before, to eight in the two days after the Kurdi photographs were published, but went back down to one story within a week.

Stories about the migrants and refugees as a domestic issue in Germany – the country that agreed to accept the highest number – were already overwhelmingly positive before the Kurdi photographs, and remained so throughout September, however by the end of the month the number of positive articles had begun to decline in Germany.

Editorial political affiliations were particularly evident towards stories dealing with policy (either domestic or EU) rather than humanitarian issues, and transcended national borders. Conservative newspapers across Europe were significantly more negative when covering the impact migrants would have on their own country, but also towards how the EU was dealing with the crisis.

In Italy, the right-leaning Il Giornale was particularly negative towards the migrants in a domestic context throughout the period studied.  Elsewhere right-leaning newspapers, such as the Daily Mail and The Telegraph in the UK, the Frankfurter Allgemeine Zeitung in Germany, Mlada fronta Dnes in Czech Republic and Rzeczpospolita in Poland, also tended to be more negative in their coverage of ‘domestic’ consequences of the migration crisis and their government’s handling of it.

Left-leaning newspapers, such as Guardian in the UK, die Tageszeitung (taz) in Germany and La Repubblica in Italy carried more sympathetic, pro-refugee coverage in general.  “In Italy, this result is the reflection of the sharp traditional political polarization of the Italian press,” said Philip Di Salvo, Italian EJO editor.  “This becomes even more apparent while covering major international issues with strong political and cultural implications.”

German tabloid, Bild, surprised analysts however. Its editorial line has traditionally been viewed as combative, even stoking prejudice towards migrants, refugees and asylum seekers, but during September it published a large number of sympathetic humanitarian stories. Tina Bettels-Schwabbauer, editor of the EJO’s German site, said this prompted scepticism from many in the media who wondered how long Bild’s enthusiasm for migrants would last. “Their scepticism was justified,” Bettels-Schwabbauer said: “by the beginning of October, Bild’s headlines had reverted to reflect their more typical stance, for example: ‘1.5 Million Refugees Expected – including families they could become 7 million.’ This could be one of the first hints that the tabloid is changing sides again.”

The reintroduction of border controls also provoked strongly negative reactions from some countries, but also divided opinion along political lines.

Analysis of ‘EU-related’ stories (eg article mostly about calls for an EU-wide policy, EU collaboration; an EU strategy, etc; or any discussion/report about the role the EU should be playing, either rejecting or accepting it) shows that in the UK generally negative articles about the EU’s handling of the crisis, and of the ability of EU members to collaborate to solve it, increased after the 13 September.

In the period 11/12 September the three UK newspapers (Guardian, Telegraph and Daily Mail) studied, ran a total of only two negative and two positive stories about the EU and its response to the crisis, but on the 14/15 September the figure was zero positive, 12 negative and two objective stories.  Coverage in the British press remained overwhelmingly negative towards the EU’s handling of the crisis after this date until the end of the month.  Notably, the Guardian changed from generally positive to generally negative coverage of the EU after the 13 September. Writing about ‘disarray’ in the EU, one Guardian columnist acknowledged the crisis had ‘played into the hands of the Eurosceptics’.

There was also a significant increase in negative stories about the EU in Poland and the Czech Republic after the 13 September introduction of border controls. Both of these countries had consistently refused to agree to Germany’s proposal that EU countries accept a quota of migrants.  Articles in Poland’s conservative daily Rzeczpospolita newspaper mostly criticised the German government and the EU for pressuring the Polish government over quotas.  The newspaper also carried articles accusing the EU and Germany of being too emotional over the refugee situation.

Newspapers in the Czech Republic, a ‘transit country’ that borders Germany and so had been immediately impacted by Merkel’s decision to reinstate controls at the Austrian border, remained overwhelmingly negative towards Merkel and EU policies from the 13 September for the rest of the month. Roman Hajek, editor of the Czech EJO, said that newspaper coverage there has been largely negative, unemotional and anti-EU throughout: “The crisis has allowed the media (and politicians) to blow up criticism of the EU,” he said.  Hajek added that the photograph of Aylan Kurdi was not published in any newspaper studied and the boy’s story barely covered.

German newspaper coverage remained positive towards the migrants even after introduction of the border controls but newspapers became more negative towards the EU after that date.  All German outlets published negative articles about how other EU countries were handling the crisis,  their reluctance to collaborate and accommodate more migrants.

Coverage also declined in all countries. Most (38 of 48) editions published between zero and four stories per day in the last period studied (24/25 September). This represented a decrease of between 80% – 50% in Western newspapers after the boy on the beach photos at the beginning of the month. The exception to this, again, were two German papers, taz and Frankfurter Allgemeine Zeitung, Coverage remained high in both these papers throughout the month. However the third German newspaper studied, Bild, published considerably fewer articles by the end of the month: from 13 over the two days after the boy on the beach photos to two articles in the period 24/25 September.

The decline in coverage may have reflected that coverage moved towards the details of EU policy and away from humanitarian stories, and also that other stories were gaining prominence at the time, such as the Volkswagen emissions scandal.

*this term is used to include refugees where not specified

With thanks to David Levy, Director of the Reuters Institute for the Study of Journalism, University of Oxford

You may also like: Compassion Fatigue and the Elusive Quest for Journalistic Impact by Scott Maier