The Dark Side of Turkey 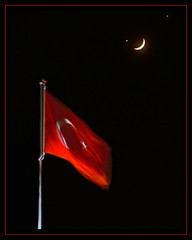 There’s been a recent revival of trials attempting to integrate Turkey into the EU, yet advocates of such an action should perhaps take a closer look.

Unfortunately, Western media rarely report on the harassment doled out to members of the press in Turkey. For the sake of transparency, I’ll confess that even as a media researcher and journalism expert, I’ve been largely unaware of how Prime Minister Erdogan has driven the media toward conformity and the ways in which he’s supported the creeping Islamisation of his country. Perhaps most alarming is the recent dismantling of Dogan, the largest Turkish media company to demonstrate a critical attitude toward his government.

Erdogan’s son-in-law was enthroned as CEO of the other media conglomerate, Calik. Unfavorable editors in chief were replaced, and journalists risking a critical lip may face personal reprimands by the prime minister himself (or worse, may find themselves imprisoned as “terrorists”).

The behavior is reminiscent of Silvio Berlusconi, in certain respects even of the “Gleichschaltung” of the media by Hitler and Goebbels during the Nazi regime in Germany. According to Reporters without Borders’ Press Freedom Index, Turkey is now ranked 148.

I owe my insights here to the European Journalism Training Association (EJTA) – the association of journalism schools in Europe. During their annual meeting, renowned Turkish editors and media researchers provided detailed information about the dramatic developments in their country.

Befitting of the overall picture, one young researcher and conference participant allegedly discovered she was in line to lose her job only a few days after the conference. The dean of her university wanted to fire her after a radical right wing newspaper accused the researcher of belonging to the forbidden Kurdistan Workers Party PKK. Thanks to student protests, this decision was revised by the rector. However, such trials of intimidation create a poisonous climate. Certainly not the best precondition to integrate this huge nation into the EU, which is already shaken by its financial crisis.

European Journalism Observatory co-founder and until 2018 Professor of Journalism and Media Management at the Università della Svizzera Italiana in Lugano. Frequent contributor to Neue Zürcher Zeitung (NZZ) and Der Tagesspiegel (Berlin), as well as to the specialist publications Schweizer Journalist and Der österreichische Journalist.
» Press Freedom » The Dark Side of Turkey