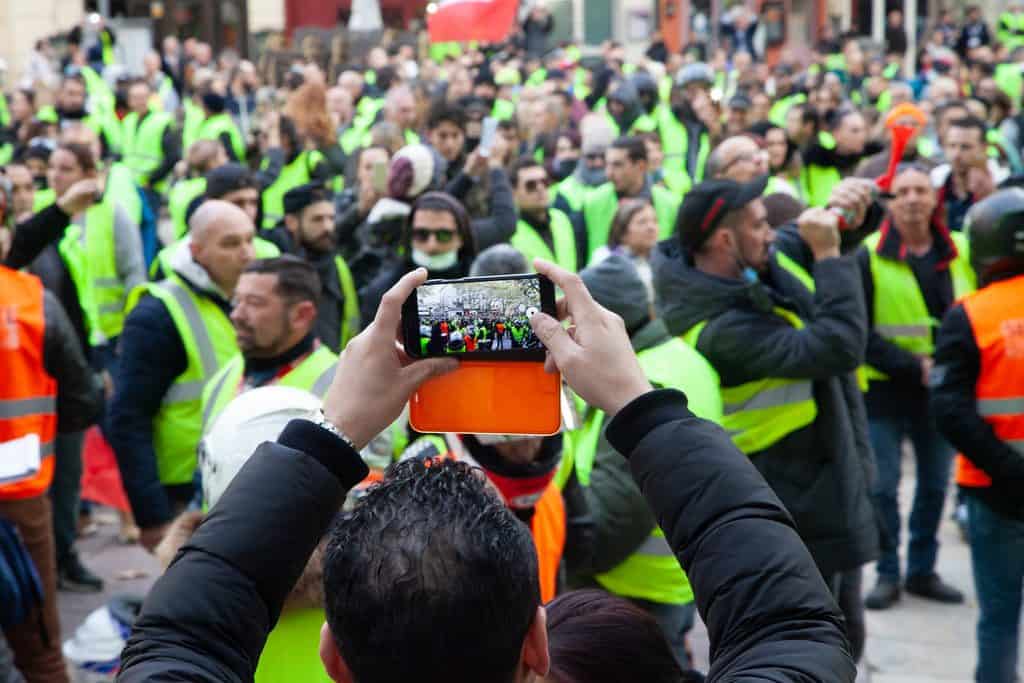 Being a journalist in France is a tough call these days. Not only do they have to be able to meet the insatiable demands imposed by the 24-hour news cycle, they also frequently face hostile reactions as they try to do their job of reporting on what’s happening in the country.

The contempt in which French journalists – especially those working for the mainstream media – are often held has come under the spotlight during the ongoing wave of gilets jaunes (yellow vests) protests, in which several reporters have become the victims of physical assaults at the hands of both demonstrators and the police.

The rolling news channel BFM TV in particular has been a frequent target of the protesters, many of whom accuse the station of biased coverage and believe that it is a vehicle for government propaganda. One demonstrator even told a group of journalists: “Our protest must be costing the government a lot: it has to pay both the security police and you, the journalists!”

The hostility towards reporters covering the protests is now so intense that many feel they have to cover up their outlet’s logo on their microphones. More and more news organisations are also providing their reporters with bodyguards.

Other disaffected groups seem to be trying to get in on the act. After a premises belonging to the public broadcaster’s local radio network France Bleu in Grenoble was set on fire at the end of January, an anarchist group posted a message hailing the arson attack on a media outlet.

But for many French journalists, these physical threats – coming as they do after years of inexorably increasing pressure imposed on them by the need to service the rolling news machine – are simply the final straw.

The relentless pressure heaped on them by newsroom managers has become so great that some still relatively young journalists now cite this as their main reason for deciding to quit the profession.

“You should be available seven days a week because news never stops”, a senior news manager at BFM TV, the most-watched 24-hour news channel in the country, is reported to have said.

All journalists, in France and elsewhere, know before they embark on this career that they will have to work long and irregular hours. They know that you have no control over when news happens, and that you have to be constantly ready to drop everything to cover a breaking story.

But not ever being able to switch off, even for a few brief hours, is now taking its toll even on the generation that joined the profession only in the last decade or so.

“When I go to bed, I don’t know if I should switch off my phone and risk being reprimanded by my boss, or keep my mobile in my hand like a rabbit in front of a car’s headlights so as not to miss anything,” a 31-year-old journalist who used to work for BFM TV told me.

The constant barrage of emails, phone calls and text messages, which do not stop even when they are on their off-days, could be one factor behind the haemorrhaging of employees from some major French news organisations.

When NextRadioTV – the media group that owns BFM TV – offered its journalists the chance to take voluntary redundancy on favourable terms if they opted to accept this offer by the end of 2018, around a third of the 700 journalists chose to leave.

The job cuts at BFM TV are not an isolated phenomenon. From 2016 to 2017, there was a 15% decrease in the number of working journalists in France. And the public service broadcaster France TV announced in January that it was planning to shed a net total of 1,000 employees – almost 10% of the workforce – by 2022.

The cuts inevitably increase the pressures on those left behind. Greater job insecurity and the need to extract more effort from a much reduced workforce mean that presenteeism is now a major scourge in France – and not only in media companies.

A recent report in Le Monde described presenteeism as “a very French obsession as widespread as it is unproductive”. The paper noted the absurdity of the fact that the long-hours culture is now endemic in the country that less than two decades ago enshrined a 35-hour working week in law.

Among media workers, there is a widely held perception that such pressures are simply not sustainable. “We are the last generation of journalists working on 24-hour news”, predicted the same 31-year-old journalist who described the pressures of his job to me – the day after he handed in his notice.