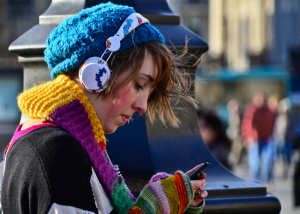 Attracting a young audience is rapidly becoming a media obsession. In the United States, NBC Universal (NBCU) recently invested $200M in Vox Media and the same amount in Buzzfeed, which has an audience mainly composed of 18 to 34 years olds.

Legacy media are chasing them, but are the so-called “millennials” running away?

It is a complicated one-way relationship, but these old-fashioned brands are persisting by launching new platforms, with different names. Are they wasting their time?

By launching Mashable France, France 24 hopes to repeat what Le Monde did with Le Huffington Post: to find a new audience, not already on its radar.

Les Echos Start has the same ambition. “It is a born-digital media that will help young people to succeed when they enter the professional world,” Julie Ranty, the project’s editor, told me.

How to be hired by a big company? How to build a start-up? Is it helpful to become expatriate? These types of questions will be answered online at Les Echos Start.  Such content is “linked”, thinks Ranty, “to the young’s number 1 need and at the same time capitalises on Les Echos’ well-known business expertise.”

One can see the problem. Les Echos, a daily newspaper specialising in finance and business, does not obviously meet the demands of the younger generation. Could they change the newspaper’s dinosaur image? Could it become more accessible?

“Being well positioned with a savvy digital-first company like BuzzFeed makes NBCU look smart,” said one expert quoted in the Los Angeles Times.

“No, no, no,” smiled Cécile Dehesdin, editor-in-chief of Buzzfeed France, when I interviewed her. She said her team writes “pedagogically” and avoids “condescension”.

“We want to produce content in innovative formats about subjects which are part of our users’ day-to-day life to make them feel like sharing those contents online,” Dehesdin explained.

“Talk young? It would be an enormous mistake,” confirms Alexandre Malsch, founder of Melty (average audience age 24-years). “It is a question of sincerity, we must write in the easiest way, as if we are talking to a friend.”

Writing in the easiest way doesn’t mean writing too quickly, however. Melty’s audience, if young, is very demanding. “If you produce a news story about a TV series saying that it has 28 episodes instead of 31, you are dead. We must be super serious, even on entertainment,” Malsch said.

Schmidt believes young people desert legacy media because they often cannot find what they are looking for.  Is it time to increase the role of videos and strong visual content, which could be sharable on social media? In the US 83% of young people have a Facebook account, 78% of young French have one.

To reach this generation, skip the computer and go directly to mobile

Mobile is the platform 16 to 24-years olds prefer to access the news, while older people are still attached to television, according to Henry Blodget, Business Insider’s editor-in-chief.

Yet, mobile-adapted content is not about using the same codes as those produced for the news sites accessed via computer.  Evan Spiegel, Snapchat’s CEO, believes that for teenagers it is neither about Facebook, nor television. They get their news at the speed of a swipe and like to get notifications and push on their phones. In the United States, 85% of young people have a smartphone. Nearly 68% in France.

The goal is clear: to please advertisers, attract traffic via an identified target, often higher-educated people, with a potential buying power.  This target is far from a niche market. According to US National Public Radio, millennials constitute the main part of the American population (more than 28%), before baby-boomers. They are more educated too (34% are graduates) and more independent when it comes to the average age of first marriage (27-years old for women, 29 for men). So independent in fact, that although they spend a substantial amount of time online, they often welcome the use of ad blockers to prevent interruptions from advertisements.

It seems every media in the world wants to know how to address a teenager. But wanting it is not enough, and some attempts misfire.

When LePost.fr was launched in September 2007, everything was designed to reach the elusive young audience that the main platform, lemonde.fr, could not reach.

Olivier Lendresse, then project manager, still remembers: “we had put in place marketing operations targeting the Star Academy viewers, but when the audience surveys came back, four months later, we realised we were not dealing with the expected audience. It was neither young nor uniform. We had a multitude of niche audiences. Here retired people, there some fans of Ségolène Royal, presidential candidate in 2007.”

For Alexandre Malsch, more than the tone used or the formats, the secret mainly lies in timing. In fact, Melty’s algorithm helps the site’s authors to produce contents that meet the web users’ inclinations, by scanning key words searched online (on search engines or social networks) at a given time.

It is the same at Spicee where the production is decided by audience habits. “The idea is to offer programmes adapted to the way of life, availability time, and moment of consumption,” Jean-Bernard Schmidt confided to me. “Each video is available as a full-length version, but also cut into episodes, with bonuses.”

The term ‘young audience’ can be interchangeable with ‘volatile audience’. At Melty, where the core target is 18 to 30 year olds, teams understand that their public eventually loses its interest. Or rather, they connect on a cycle “that corresponds to the lifetime of a cultural product”, explains Alexandre Malsch. They know that when the cultural product’s name is Justin Bieber or Grey’s Anatomy, the cycle can last several years.  By then, the audience might have grown up and moved on to other things.

This article was originally published on Slate.fr