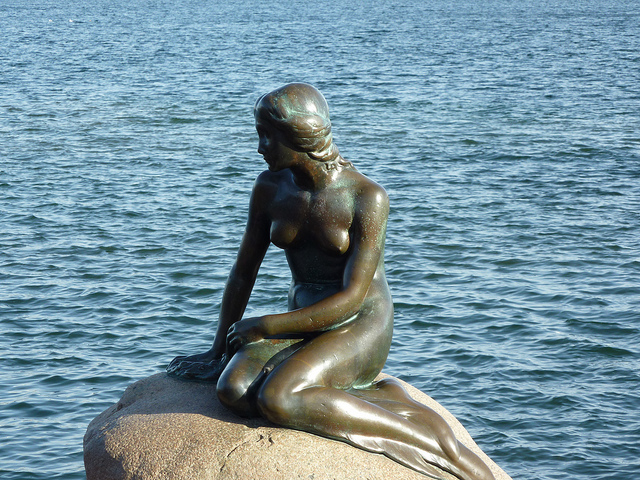 Too sexy for Facebook? A photograph of The Little Mermaid statue in Copenhagen was blocked by Facebook

A new law, intended to combat hate speech online, was enacted in Germany last week. From October 2 any social network with over two million users nationally will be required to remove ‘offensive posts’ – defined as ‘evidently unlawful abusive material’ within 24 hours (or seven days if the content is difficult to classify). From January 2018 companies, including Facebook, YouTube, Instagram and Twitter, that fail to remove such content could be fined up to 50 million euros (£44m).

The German government argues the new law, the Network Enforcement Act (NetzDG), is essential to counter a 300 per cent increase in ‘digital hate crimes’ over recent years. It stated it is targeting social networks because “no one should be above the law”.

The law targets as “unlawful” content that offends any of nearly two dozen sections of the German Criminal Code. Those sections of the Code include “public incitement to crime,” “violation of intimate privacy by taking photographs,” defamation, “treasonous forgery”, forming criminal or terrorist organisations, and “dissemination of depictions of violence.”

Social networks have criticised NetzDG, claiming threats of punishment and huge fines might encourage sites to ‘over-block’ – remove any questionable content even if it is not clearly unlawful – to avoid fines.  They have also argued the law would place responsibility for “complex legal decisions”, such as what content is classified as hate speech, from public authorities to private companies. Facebook said: “We believe the best solutions will be found when government, civil society and industry work together and that this law, as it stands now, will not improve efforts to tackle this important societal problem.”

Facebook has expressed concern over the level of hate speech on its platform but with two billion users worldwide it argues the task of monitoring and removing it is overwhelming. The site has hired 3000 extra staff worldwide, including 600 who will be based in Berlin, Germany. They will be expected to monitor content in-house, including posts flagged by readers as ‘suspicious’.

Legal experts have expressed doubts over whether the new act is compatible with the principle of freedom of expression and also with a new EU E-privacy directive, effective in May 2018.

There is also a fear that given the scale of content on social platforms and the lack of a clear or agreed definition of ‘evidently unlawful abusive material’, networks will be forced to become over-zealous – censoring content needlessly.

“Tech companies may have a role to play in challenging illegal hate speech and other unlawful content,” said Ed Johnson-Williams, of the Open Rights Group. “But this new law in Germany is getting the balance wrong and presents huge risks to freedom of expression. There are no incentives to ensure the companies properly analyse the context of content and leave legal content online.”

The EU has a different approach to tackling illegal online content. It has agreed a voluntary code of conduct with social networks, aimed at removing “hate speech, violence and terrorism”. However it has warned that if the guidelines are not followed voluntarily, they will be enforced.

Vera Jourová, the EU’s Commissioner for Justice, Consumers and Gender Equality, said: “The rule of law applies online just as much as offline. We cannot accept a digital Wild West, and we must act. The code of conduct I agreed with Facebook, Twitter, Google and Microsoft shows that a self-regulatory approach can serve as a good example and can lead to results. However, if the tech companies don’t deliver, we will do it.”

Facebook has admitted a number of errors where content has been wrongly classified as ‘offensive’. It has taken down photographs depicting the Little Mermaid statue in Copenhagen and another of a 16th century statue of Neptune in Bologna, on the grounds that they were “too sexual”. The platform later reinstated both, admitting they were removed in error. It has also removed – and reinstated – the iconic image of the Vietnam war. A photograph of a naked, crying 9-year old Phan Thi Kim Phuc fleeing napalm bombs.

Caroline Lees is the Head of Communications at the Reuters Institute for the Study of Journalism. She is the former editor of the European Journalism Observatory’s English language site. She is a British journalist and has worked for The Sunday Times, London, for seven years including time spent in Delhi as South Asia Correspondent and as a news reporter and arts correspondent. She has also worked as foreign editor and assistant editor of The Scotsman, and for the Economist and Telegraph Media Group.
» Media and Politics, Short stories » Can Germany’s New Law End ‘Hate...