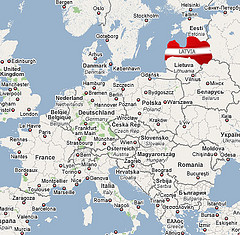 The European Journalism Observatory is pleased to announce the latest addition to our network of partners, EJO Latvia!

With the help of Ainars Dimants, Associate Professor of  Journalism and Communications Research and Liga Ozolina, PhD student and Latvian EJO Editor – both from the Turiba School of Business Administration and the Media Institute in Riga – we’re now able to provide new insight and perspectives on the Latvian media landscape.

Why Latvia? Why now?

Looking back on last year’s events in Latvia and worldwide, we recall numerous cases where the media’s role in society landed at the center of attention. Aside from the vast controversy incited by the Wikileaks case, Latvia experienced its own national “leakage” (attributed to “Neo,” an IT scientist from the University of Latvia) in the spring of 2010, when confidential information was lifted from the State Revenue Service. The event received attention from a variety of European media organizations, including the Frankfurter Allgemeine Zeitung. Both the Wikileaks case and Latvia’s revenue scandal contributed to heightened discussions about freedom of speech, public interest and the rights and responsibilities of journalists.

The confidential change of ownership for Diena, one of the largest daily newspapers in Latvia, drew large-scale attention as well. As the actual owners of the newspaper weren’t identified for quite some time during the preelection year, much concern surfaced about political and economical interests influencing the paper’s reportage. In December of 2010, we witnessed a similar escalation of events at a Russian-language daily, Telegraf  in Latvia, which raised questions about Russia’s increased interest in Latvian media since the economic crisis. Latvia’s position in the Press Freedom Index fell as the preelection period saw the instrumentalization of the media in favor of one political party or another. Worse still, journalists have had phone calls illegally monitored, arbitrary searches conducted at their homes, and faced both extortion and threats.

These and many other events underscore deep problems in Latvian media policy and media organizations as well as a lack of solidarity among media workers,  journalists in particular. Professional organizations of journalists in Latvia play a weak role in combating problems within the industry, and in many cases merely act as observers. This is perhaps why many involved in Latvian media have high hopes for the new Association of Latvian Journalists, which was only founded at the end of 2010. As for now, we can only wait to see what changes will develop, if any at all.

EJO believes that valuable, credible journalism must be based on high standards of quality and guaranteed protection of the professional and social rights of journalists. These are prerequisites for a solid media industry, which, of course, ensures journalistic independence.

One of the most effective ways to arrive at this point in journalism is through the transfer of professional knowledge. Only by sharing information among media professionals can we hope to educate the media. We feel that the European Journalism Observatory, through its commitment to the transfer of communications research results, will contribute to the betterment of media and journalism. For this reason, we’re glad to embark on a new partnership with the EJO!

Liga Ozolina is a PhD student on the Communication Management Program at Turiba University, Riga. She was previously the editor of the EJO's Latvian-language site and has also worked on Diena - one of Latvia's largest daily newspapers - and for various online media outlets. Her academic interests include journalists' professional identity, entrepreneurial journalism, online journalism and new media business models.
» Specialist Journalism » EJO Latvia