One Story, Many Countries: Why Does The Media (Still) Stereotype Africa? 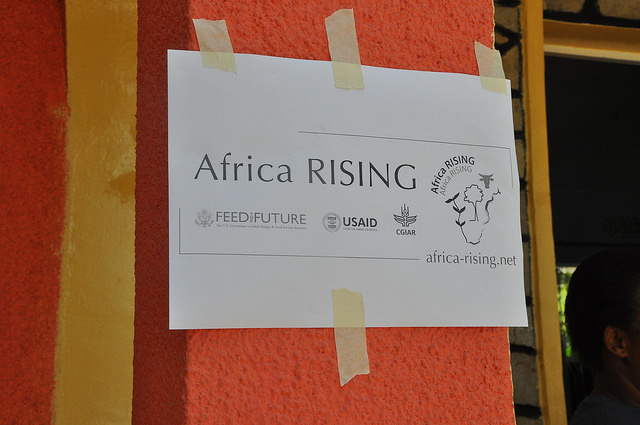 Africa Rising – the new obligatory catchphrase, now that ‘it is fashionable to be upbeat about Africa.’

‘Aways use the word ‘Africa’ or ‘Darkness’ or ‘Safari’ in your title.’ These are the opening words of a famous satirical essay by the the Kenyan writer Binyavanga Wainaina ‘How not to Write about Africa.’ It was widely acclaimed when it appeared in 2005 and (later updated in 2012) poked fun at the repeated stereotypes in the international media reporting of Africa.

The same theme was addressed in the much shared TED talk by the prizewinning Nigerian author Chimamanda Ngozi Adichie. She spoke about the danger of a single story in the way that clichés about poverty, famine and disasters dominated reporting and understanding of Africa. There was rarely a rounded, balanced or nuanced approach. She described the moment when she arrived to study at a US university and how her roommate had expressed astonishment to meet someone from Africa who was not a starving victim, such was the one-dimensional way that the continent was reported and understood.

Afro-pessimism has been replaced by a new sweeping generalisation

These writers offer critiques of the international reporting of Africa highlighting the focus upon the suffering of powerless victims, spiced with the occasional celebrity visit or stunning shot of wildlife. Indeed they point also to the absurdity of media coverage which tries to capture a huge continent of over 50 countries in the same sweeping broad generalisations. And most of all they are scornful of what has often been called Afro-pessimism; the tendency to depoliticise stories in sub-Saharan Africa and reduce them to hopeless humanitarian crises or bizarre pictures.

Authors beyond Africa have remarked upon the same thing. Christopher Hitchens famously wrote in  Vanity Fair in 1994 that it was impossible to “find anywhere in the entire forsaken continent, anything like a success story…the famines, plagues and epidemics are, from old style locusts to ultra-modern aids, the most sweeping and devastating. Human life is at its nastiest, most brutish and shortest.”

“Suddenly the continent is brimming with mobile phones”

In more recent years it looks as if the single story has shifted gear. Instead of the relentless negative image of suffering and impoverished victims there is a new narrative, ‘Africa Rising’. Suddenly the continent is brimming with mobile phones and energetic businesses. There was once (in May 2000) a famous Economist front cover portraying Africa as the hopeless continent. This has been replaced in 2011 by a cover full of bright skies and with the Africa Rising slogan. 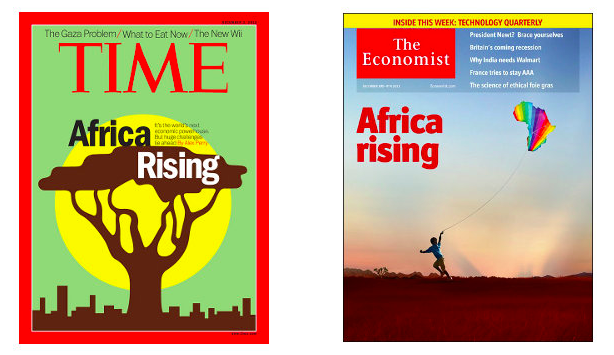 In fact Michela Wrong in the New York Times referred to this as the new obligatory catchphrase, now that ‘it is fashionable these days to be upbeat about Africa.’ And the former editor of African Arguments, Simon Freemantle, remarked that ‘hardly a week passes without a notable report or conference extolling the continent’s growth performance and structural potential.’

The trouble is that all reductionist stereotypes are incomplete and inaccurate. And in particular this latest characterisation of Africa as a place  brimming with entrepreneurs, complete with its own ‘silicon savannah’ has other problems. In a part of the world still facing staggering levels of inequality it brings the danger of tying Africa too close to neo-liberal agenda and objectives.

Thomas Piketty’s observations on the yawning gaps in income are all too apparent in the rising free markets in sub-Saharan Africa. Whatever successes the bright new business achieve, there is very little evidence of a ‘trickle down’ effect to those further down the pile.

There are indeed success stories from many places demonstrating the capacity and abilities of developing African economies. Indeed some countries in Africa are currently the fastest growing economies in the world. But the Africa Rising narratives ignore the plight of those who are still left far behind in societies which do not provide, outside the family or the immediate community, anything much in the way of a social safety net which most Western societies have long taken for granted.

The elderly, disabled, sick or plain unlucky still face a grim prospect both in the overcrowded cities and remote rural areas. We may sympathise with the plight of Africans boarding boats and trying to make a better life overseas. Yet it is well known that the so-called economic migrants who are seeking a better life across the Mediterranean are not those at the very bottom, who could never afford or even contemplate such a journey. Piketty’s wider arguments about the need for a ‘social state’ to regulate rampant capitalism are more vital than ever in societies that exhibit many of the brutal characteristics of buccaneering Victorian capitalism.

Journalists must remind audiences of Africa’s other narratives

So instead of falling into the old Afro-pessimism stereotype, media reporting needs to guard against being limited to the latest ‘positive’ narrative. Simple binaries are not sufficient in telling the news of such a vast and multifaceted area. The rising African middle classes and the economic elites are only one dimension. Despite all the stories of booming success, of which there are many, we need to remind audiences of other narratives.

The highly successful Kenyan engineer Evans Wadongo who has pioneered solar lamps and became one of CNN’s top heroes of 2010 is a good example of this. Alongside his technological and commercial achievements in his blog and elsewhere he makes a big effort to highlight the ongoing inequalities and shocking poverty which is still so prevalent in many parts of Kenya. The media needs to remember as well those who are not currently part of the African rising story.

It is great news that we have moved well beyond the single story of the starving African but we do not want to fall into a binary trap and adopt another unfortunate stereotype in its place.

Africa’s media image in the 21st century: from the “heart of darkness” to “Africa rising”

Suzanne Franks is professor of Journalism and heads the department of Journalism at City, University of London. She is the co-editor with Mel Bunce and Chris Paterson of Africa’s Media Image in the Twenty First Century. From ‘Heart of Darkness’ to ‘Africa Rising’. (Routledge, 2016)
» Ethics and Quality, Media and Politics, Recent » One Story, Many Countries: Why Does...