Newspapers and the Internet: How to overcome the crisis 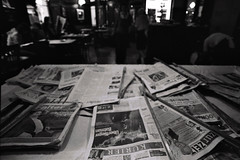 Newspapers have never been read as regularly as they are today. Nonetheless, the publishing industry is in a crisis not transitional in form, but rather structural. In order to understand how to resolve the dilemma, the following points must be taken into consideration:

What should be done?
A publishing firm’s survival depends on the pace of reader migration from printed material to the Web. The slower the pace, the more time newspapers have to adjust. Obituaries for traditional papers are therefore premature. The hybrid system of online/offline use will become the most valid economic model for a brief period. Nonetheless, the volume of print advertising seems to be decreasing. From this arises the need to adopt a new approach to publishing. Consider the following:
To download the complete report in Italian, click here.
Translated by Irina Oryshkevich
Photo courtesy of Flickr.com – alex barth

» Digital News » Newspapers and the Internet: How to...