Wikipedia,
A Place for Political Dialogue

A new study on Internet encyclopedia Wikipedia shows how interaction among users proclaiming political affiliation is more cross party than previously imagined. The recent U.S. presidential election evidenced the indispensability of the Internet when it comes to accessing political information. One of the most frequently used resources is Wikipedia, which has 482 million unique monthly users and is the sixth most-visited website in the world. It serves as an enormous and easy-to-use platform designed to fulfill the information appetites of the masses. In a connected world, the Internet’s ability to influence audiences and their political choices is key, but is the information provided by one of its most powerful tools biased? Is Wikipedia’s political content the result of real participatory dialogue among opposing political groups?

Six researchers from the University of Southern California and the Barcelona Media Foundation recently published “Jointly They Edit: Political Interaction in Wikipedia,” a study exploring “how users of Wikipedia choose to display (or not to display) their political affiliation,” and “the patterns of cross-party interaction and community participation among those users proclaiming a political affiliation.” Surprisingly, when editing entries on Wikipedia, political affiliations are often set aside by users/editors in favor of the more neutral self-identification as a “Wikipedian” According to the research, “Despite the increasing political divisions in the U.S., there are still areas in which political dialogue is possible and happens.” And “talk pages“, pages which editors can use to propose changes to an article on Wikipedia, may facilitate such discourse.

Recent political interaction studies focused on the Internet have shown a growing trend towards polarization among users of different political views. Political blogs in the U.S and Twitter have been objects of analysis on numerous occasions and results indicate that people usually prefer to read and interact with users who publish content that reinforces their own political points of view. In order for Wikipedia – a wiki based entirely on user-generated content, – to function, it is fundamental to understand how, according to the research, it “may have important consequences for the accuracy and neutrality of political information provided online.” Jessica G. Neff, David Laniado, Karolin Eva Kappler, Yana Volkovich, Pablo Aragon and Andreas Kaltenbrunner selected 1,390 members from the English Wikipedia community who, “explicitly proclaim their political affiliation as either Republican or Democrat” by identifying their affiliation on personal Web pages. Using userboxes, customizable boxes shown on each personal page, Wikipedians can reveal information about political affiliation along with other preferences. Selected users are then manually coded as “conservative,” “liberal,” or “other.”

The researchers then analyzed editing activity and comments posted by users in article talk pages (where users discuss content and modifications about a specific article) and user walls (where users can send each other personal messages). Researchers found that 50 percent of users in each group wrote more than five comments (20 percent wrote more than 50 comments) with Democrats being the most active. Examination of the 100 most-edited articles from each group revealed that both Democrats and Republicans tend to prefer editing entries dealing with “topics directly related to their party, such as Barack Obama or Bill Clinton for Democrats, John McCain or Republican Party for Republicans.” 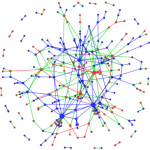 While this outcome is barely a shock, considering the general polarization researchers have found in political blogs and Twitter, the most interesting results come from the analysis of communication patterns among users. Is there an interaction preference among editors belonging to the same party or do Wikipedians prefer discussions with diverse opinions and views? Using statistical instruments, researchers synthetized the data and found “no statistically significant preference for either inter- or intra-party interaction” on article talk pages. Meaning political users on Wikipedia are willing to interact as “fighters” who engage in disputes with their opponents when editing entries on Wikipedia. On the other hand, when building more personal interaction, they are still inclined to communicate with members of the same party via user walls.

By looking again at userboxes, researchers learned that editors who share their political affiliations are often declared as “Wikipedian” in their personal pages. This might explain why Web-users who edit pages on Wikipediaperceive their roles as members within the community to be stronger than their political affiliations. This is why, contrary to other platforms, partisanship and polarization among political users on Wikipedia is not salient. Despite the profound splitting of the political milieu in the U.S., there are still places (online) where a real political dialogue can take place. Wikipedia is definitely one of those.

Philip Di Salvo is a post-doctoral researcher based at the Institute of Media and Journalism of the Università della Svizzera italiana (USI) in Lugano. His main areas of research are whistleblowing, investigative journalism, internet surveillance and the relationship between journalism and hacking. At USI, he also teaches journalism at both the bachelor's and master's levels. Philip received his PhD in Communication Sciences from USI in 2018 with a dissertation on encrypted whistleblowing platforms in journalism. He is also a lecturer at Milan's Nuova Accademia di Belle Arti (NABA). As a freelance journalist, he writes about the social impact of technology for Wired, Motherboard/Vice, Esquire and other publications. Philip obtained a master's degree in Media Management from USI in 2012 and a bachelor's degree in Literature from Milan's Università degli Studi in 2010. He is the Italian editor of the European Journalism Observatory, based at the USI in Lugano.
» Digital News » Wikipedia,
A Place for Political...