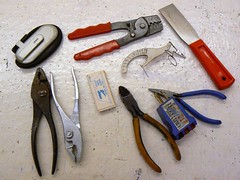 Contemporary journalists are granted access to a wealth of “tools” – or better – “tool kits,” few of which existed a decade ago.

Tools for journalists, which at one point included heirlooms like the now-obsolete pencil sharpener and extra set of batteries, are often Web-based curations of resources and data tailored to a particular type of journalist. In many cases, the trouble is simply locating them or knowing they exist at all.

A recent project launched by the European Journalism Centre is worth a bit of attention, if for no other reason than its emphasis on covering natural disasters, which – despite being relatively commonplace – often throw reporters into tailspin due to inherent unpredictability.

Emergency Journalism is a new, smartly designed “toolkit for better, more accurate reporting.” The website compiles a variety of resources for journalists reporting on/in volatile situations, focusing on Web applications and platforms which incorporate new digital technology to augment coverage of emergencies like natural disasters and political conflicts. Of particular interest is the segment devoted to discovering new ways to cover wildfires, an endeavor known to be physically and emotionally taxing and requires constant verification of highly mercurial data.

The number of specialized websites (or “toolkits”) designed to help journalists has expanded tremendously in the past few years. There are sites offering instruction on how to optimize Web searches, on finding people who’d rather not be found, on retrieving public records and information, on understanding digital publishing rights, on topographic maps and charts for land sea and air (explained in journalese, for journalists), on interpreting data/stats in reporting (an area frequently botched beyond recognition), on covering trauma and tragedy – the list continues to grow, just like everything else on the Internet.

Someone once said (or, according to the Internet, Mitch Kapor of the Electronic Frontier Foundation once said), “Getting information off the Internet is like having a drink from a fire hydrant.” While the simile holds true, there seem to be a few new ways to organize the outpouring.

Kate Nacy is the first EJO Fellow to participate the European Journalism Fellowship program at the Freie Universität Berlin. Kate Nacy works as a journalist, writer and editor. Her work has appeared in news publications as well as in literary and arts journals. She served as the European Journalism Observatory’s English Web Editor from 2008 – 2012.
» Digital News » We’ve Got Tools