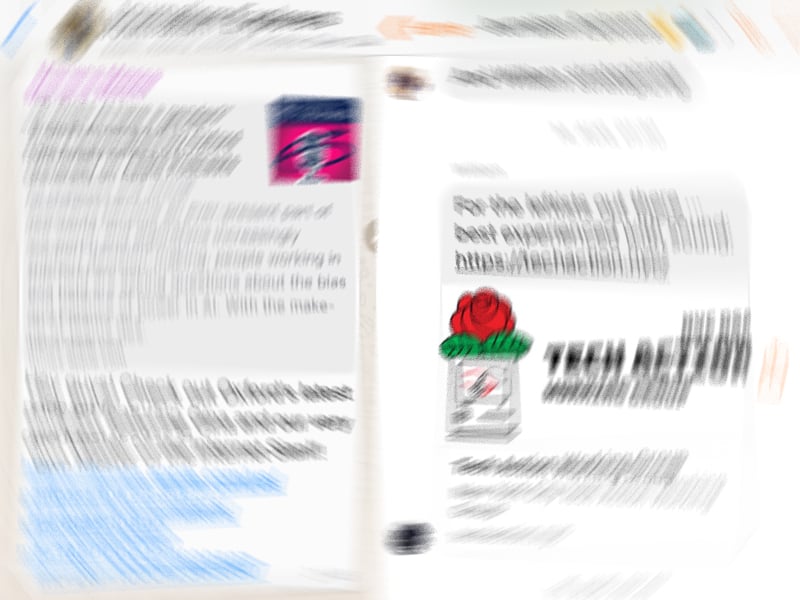 Dissatisfied with a lack of privacy, polarising online debates and increasing commercialisation, people are increasingly moving from open platforms like Facebook towards more private social media and messaging apps such as WhatsApp. This is not only true for their general use of these platforms but also for news consumption and sharing, as the latest Digital News Report has shown. In a recent study (see here and here for full papers), we opened up this black box of what is going on in these “dark social” media spaces.

Unfortunately, we know very little about what people actually do with news and journalism on “dark social” platforms, such as messaging apps and private Facebook communities. Users’ engagement with content in messaging apps such as WhatsApp or Facebook Messenger is difficult to measure with traditional tracking software. Most of these applications handle user traffic without adding referral data when someone clicks a link, so it does not show up in the metrics collected by news organisations. Audience data collected through people’s public Facebook and Twitter timelines or through shares via WhatsApp on news site, might thus just be the tip of the iceberg. What is going on in the chats itself is hard to tell.

Moreover, people’s experiences and rationales for consuming, sharing and discussing news on closed-off social network sites and apps – or conversely, their reasons for avoiding news content on these platforms – remain relatively unexplored. In order to address this conundrum and shed some light on what is going on behind closed doors, we conducted several focus groups in different communities in the Netherlands. They included work colleagues, friends, neighbours, local volunteers, and a soccer team. The groups were composed of people who knew each other personally and communicated through social media platforms at least twice a week. In each focus group, we asked our participants to discuss their patterns of social media use, the content they shared, and the role of news and journalism on those platforms.

Engaging With News In Semi-Private Spaces

Our results show that user engagement on the main Facebook ‘news feed’ has become very passive. Participants say both they and their friends rarely post on their public Facebook timelines anymore. The platform thus transformed from a space for engagement and discussion into a mere hub for consuming various streams of information (journalism, lifestyle content, increasingly scarce social updates, etc.).
Instead, messaging apps and Facebook groups are experienced as more suitable spaces for actually engaging with news. Our participants said that they offer a safer environment to exchange and discuss public issues with a limited risk of exposure or confrontation. Moreover, they make it far easier for users to imagine their audience when sharing or discussing news content. Our focus groups also highlighted that these more private spaces provide better opportunities to explore issues in a more flexible manner rather than forcing them to present others with what could be perceived as definite statements.

Although messaging apps theoretically lend themselves to breaking news, our participants reported that they rarely share stories on apps such WhatsApp to be the first to report breaking news. They assume others will already have heard about such events through other means. Instead, messaging apps are used to share background information on mainstream news, explore issues from multiple perspectives, or uncover the impact of news on their immediate lives. In this context, messaging apps help people to draw connections between different news events and to form their opinions on public issues. Interestingly, our findings suggest that user prefer to share news originating from journalism organisations they know, because such stories are considered to be more reliable.

The Relevance Of Social Context

Most people interviewed as part of our study were members of multiple WhatsApp and Facebook groups. However, how they engaged varied considerably between communities, depending on the aim and social norms of the respective group.

Another thing we realised is that social media groups tend to have a clear purpose. Whereas some of the communities we interviewed employed their groups as news curation tools without much discussion of the shared stories, others saw their group as a space for playful debate on public issues, with news being used to spark conversation. In groups that considered their social media communities simply as a means to foster relationships, journalism played a lesser role. Here, implicit norms meant that the conversation had to be kept light and casual and members usually avoided sharing news stories.

The type of relationships within the group also played a role. Communities whose members considered their ties to be weak – in other words, based around being acquaintances, rather than close friends – were generally more news-focused, as these groups had fewer shared interests. News here served as an easy topic of conversation, stressing journalism’s connective potentialities.

This shift of news engagement towards dark social media platforms presents an economic challenge for news organisations. Technological boundaries on these platforms make it more difficult for stories to spread and go viral.

The rise of messaging apps for news also raises important democratic questions about such practices. Dark social media provide safe spaces for users to construct an understanding of news with others whom they trust. In this way, these platforms facilitate social cohesion within the group. However, because such discussions take place in private spaces inaccessible to people outside them, this development may also hinder journalism’s classic integrative function – to establish common ground between citizens. Fulfilling the goal of facilitating a broader public connection that transcends community boundaries, while simultaneously catering to users’ needs for privacy and sense-making through interpersonal networks, will therefore be one of news organizations’ main challenges ahead.

The findings of this study have previously been published in New Media & Society and in Digital Journalism. Both our papers “Shedding light on the dark social: The connective role of news and journalism in social media communities” and “Sharing and discussing news in private social media groups: The social function of news and current affairs in location-based, work-oriented and leisure-focused communities” are freely accessible.

Marcel Broersma is Professor and director of the Centre for Media and Journalism Studies at the University of Groningen. His research examines the use of social media in journalism and politics, shifting patterns of news use, emerging forms and styles of journalism, and the epistemology of journalism. He is the author of numerous journal articles, books and book chapters. Joëlle Swart is a postdoctoral researcher at the Centre for Media and Journalism Studies of the University of Groningen, The Netherlands. Her research focuses on the crossroads of digital media use, journalism and citizenship. Recently, she published her PhD thesis titled 'Haven’t you heard?" on the connective role of news and journalism in everyday life. Her work on news audiences has been published in several international academic journals, including Journalism Studies, Media, Culture & Society, Digital Journalism and New Media & Society. Chris Peters is Associate Professor of Media and Communication at Aalborg University’s Copenhagen campus, Denmark. His research investigates the changing experiences, conceptions and spatiotemporal aspects of information in a digital era, and the sociocultural transformations associated with this in everyday life. His work is especially focused on news audiences and the meanings people make from journalism. His books include Rethinking Journalism (Routledge, 2013) and Rethinking Journalism Again (Routledge, 2016, both with Marcel Broersma), and he is currently working on The Visual Citizen (Oxford University Press, forthcoming, with Stuart Allan).
» Research, Specialist Journalism » Why Messaging Apps Matter for News...