Research: Why Are Some Digital News Organisations More Successful Than Others? 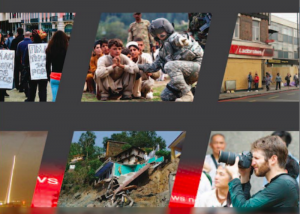 Lucy Kueng, a research fellow at the Reuters Institute for the Study of Journalism specialising in media leadership, strategy and innovation, studied five “acknowledged” successful digital news organisations – representing both legacy and ‘clean sheet’ media companies – the New York Times, the Guardian, BuzzFeed, Vice and Quartz – to find out why they have succeeded where other, similar companies have struggled, or failed.

Although conceding that each of the five media organisations is different, Kueng’s research identified interlinked elements crucial to the success of each.  “Their power lies in their combination, in the virtuous circle that is created when all are present and function together,” she explains in the report, Innovators in Digital News.

Element 1: 1 A sureness and singularity of purpose – “All the news organisations researched know what they are trying to do, what audiences they serve and how to create value for them.”

Element 3: Strong leadership – “An exceptional set of individuals are in charge of these organisations…”

Element 4: Pro-digital culture – “All the organisations profiled here have strong cultures….Digital is seen as an opportunity: a battle, but one that can be won.

Element 5: Deep integration of tech and journalism – “Because the future of the news is written in code.”

Element 6: Autonomous or decoupled – “Autonomy from the legacy parent seems to be positively correlated with success.”

Kueng’s findings are based on a combination of desk research and interviews with key figures within the organisations studied, including Mark Thompson of the New York Times, Aron Pilhofer at the Guardian and Will Hayward of BuzzFeed. Kueng also interviewed industry experts: Emily Bell of the Columbia University Graduate School of Journalism, Jimmy Maymann, Huffington Post CEO, and Tom Standage of The Economist, among others.

Kueng believes the news industry is facing a classic case of “disruptive innovation”.

“The effect the invention of the internet has had on the print newspaper is similar to the effect the launch of the railways had on horse-drawn transportation,” Kueng believes.  “This simile helps because it underlines that while the basic need – the provision of news and information about the world – has remained the same, the technologies used to answer that need are fundamentally different. Newspapers are effectively being asked to change from providers of horse-drawn transportation into railway companies.”

This fundamental change explains why so few news organisations have successfully transformed themselves. “Shifting from print to digital news is equivalent to closing the stables, selling the horses, and buying a railway. A different business altogether,” writes Kueng.

Kueng details how each organisation in her study has adapted and changed to meet the digital challenge. The Guardian, a 200-year old legacy newspaper, became a “pioneer of legacy media reinvention,” allowing it to successfully transform itself from liberal British broadsheet into a leading global provider of digital news in the English language.

The paper had an early start on digital platforms (theguardian.co.uk was launched in 1999) and conducted consistent experimentation which offered “valuable insights into how digital news markets operate.”

The New York Times, another legacy organisation with a long heritage, national reputation and a reputation for quality journalism, also had an early start with digital innovation. It has kept up with industry developments since then. Despite substantial print revenue losses, the New York Times has increasingly healthy digital subscription revenues. Experiments with native advertising have contributed to a 20% increase in online advertising.

Quartz, a digital-only, mobile-first provider of digital news, is aimed at upmarket audiences and was designed to be “what The Economist would look like if it was launched in 2012″. Kueng identifies “extremely coherent elements of the Quartz formula”, including a decision to be social-mobile only initially, and to target a clear market (‘the smart, young and bored at work’) as well as other clear strategies that have contributed to its rapid growth.

BuzzFeed, founded in 2006, is a different ‘clean sheet’ model. A tech-media hybrid, its content creation is governed by data science and tech industry principles underlie how the organisation is run. Kueng details how BuzzFeed is adding news content to its editorial and hiring legacy news reporters to work in its news operation.

Vice Media, the fifth company studied, has both legacy and digital outlets globally, but its news video operations, aimed at young audiences, are increasingly important and contributing to its rapid growth, via new and traditional platforms. Privately owned, it is well financed, valued at $2.5 billion. Shane Smith, its high profile founder and chief strategist is a strong leader with a clear vision, according to Kueng.

Warning: success can be transient

Kueng acknowledges that it is difficult to define the term ‘success’ in the current media context, because the environment is changing so rapidly. Other, deemed equally successful, media companies could have been chosen for her study (such as Huffington Post, Vox, the Financial Times and The Economist). Eventually the five subjects were chosen on the basis of access and timing.

Kueng concludes her study with a warning for successful media companies: Don’t be complacent.

None of the elements of success identified in the study, she says, is permanent.

“Leaders can leave, agile new organisations can become flabby middle-aged ones. A strategy can get caught in its own niche. A strong culture can morph alarmingly quickly into an obstacle if it is tied too tightly to a specific strategic context. And of course, fresh new players will themselves become incumbents over time and innovation will get harder for them.

“But what will remain constant is the growth in digital markets. New sectors of the media industry are emerging, and leadership in these is open to any organisation that can innovate in response.”

Caroline Lees is the Head of Communications at the Reuters Institute for the Study of Journalism. She is the former editor of the European Journalism Observatory’s English language site. She is a British journalist and has worked for The Sunday Times, London, for seven years including time spent in Delhi as South Asia Correspondent and as a news reporter and arts correspondent. She has also worked as foreign editor and assistant editor of The Scotsman, and for the Economist and Telegraph Media Group.
» Digital News, Recent » Research: Why Are Some Digital News...