Men Writing About Men: Media And The UK General Election 2015 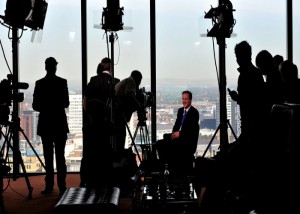 Just as formal political institutions and activities are dominated by men, so too is the news coverage those institutions attract. The recent UK General Election was no different,  just 15.2% of all politicians featured in the media coverage were women, 17.4% of articles were written by female journalists and 13.5% of experts consulted by the media were women.

The quirks of this campaign meant that for the first time there were three women party leaders: Nicola Sturgeon of the Scottish National Party, Leanne Wood of Plaid Cymru and Natalie Bennett of the Green Party. This increase in women in leadership roles might lead one to expect women to appear more frequently in coverage than has been seen during previous elections.

The Loughborough Communication Research Centre’s content analysis of the press and television news coverage of the formal campaign, however, shows that this was not the case.  Only four of the twenty individuals who featured most prominently in the media during the campaign were women.

Nicola Sturgeon was the fourth most prominent individual in the campaign (being mentioned in 5.7% of all items) and was, by some margin, the most visible woman. Her impressive performance in the televised leaders’ debate meant she gained a considerable amount of attention – not all of it positive.

Referring to her potential role as a decisive partner in the event of a minority Labour government, the Conservative-supporting press, in particular, were at pains to depict her in less than flattering terms. She was labelled ‘the most dangerous woman in Britain’ by the Daily Mail. The press also picked over her past in unfavourable, and arguably irrelevant ways, in an attempt to discredit her.  Such items focused on her personal life and physical appearance, which are familiar subjects in the coverage of women politicians.

The other women party leaders failed to have much of an impact on the coverage; Natalie Bennett was the 12th most prominent and Leanne Wood, the 17th (two places below the Prime Minister’s wife, Samantha Cameron).  Other high profile women from the cabinet, like Home Secretary Theresa May and Education Secretary Nicky Morgan, were largely absent.

Most of the press and broadcast media attention focussed on David Cameron and Ed Miliband. This is not altogether surprising given that these were the two main contenders for Prime Minister.

Election coverage ordinarily calls upon a wide range of voices from the world of business, academics and public sector representatives to comment upon the proceedings. Unsurprisingly, these roles were also dominated by men.

For example, just 14.4% of business representatives and 13.5% of other experts mentioned were women. References to ordinary people were much more gender balanced, with women accounting for 46.8% of individual citizens. The only area that women actually dominated was the category of ‘relative of politician’. 81.2% of these individuals were women. Many of these references were to Samantha Cameron (as previously discussed.)

It was not only the content of the news coverage itself which showed a dearth of women. Our analysis showed that of all news items with a single author, just 17.4% were authored by women, compared to 53.5% that were authored by men, demonstrating that national political journalism is still very much a domain in which men write about other men.

Emily Harmer is a post-doctoral researcher in the Department of Social sciences at Loughborough University. Her research analyses the relationship between media, gender and political communication.
» Media and Politics, Recent » Men Writing About Men: Media And...