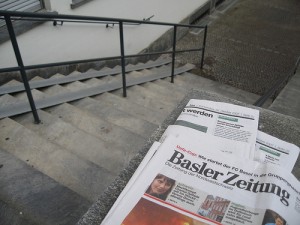 After the collateral damage caused by free papers, a surge towards media concentration.

Recently, a normally sedate Switzerland gained unusual media attention, not only due to data theft and banking secrecy, but with the help of Ghedafi and the minaret ban, the country found itself in international spotlights. Even media outlets themselves are featured in headlines, most recently the Basler Zeitung, which was surprisingly taken over by Tito Tettamanti, a well-known investor from Ticino. The deal gained attention for two reasons: First, though Tettamanti became a partial owner of the renowned Weltwoche and the Jean Frey company AG a few years before, he remains an investor with little media experience entering the Swiss industry on a large scale. Second, Tettamanti‘s intent may well be to block the expansive strategy of the largest newspaper chain in Switzerland, Tamedia.

As the 80-year-old Tettamanti – not unlike George Soros on the international stage – surpasses many greedy bankers and private equity-investors with his intellectual prowess, his motives are puzzling. Does he hope to profit even further by investing in the suffering newspaper branch? Does he wish to gain political influence? Or has the scope of his frequent guest column in Swiss regional paper Corriere del Ticino become too narrow? Does he want his investment to be seen as a patriotic act, helping to preserve press diversity, pitting Tettamanti against powerful competitors?

One such competitor is certainly Tamedia. Once plans to purchase Edipresse – the largest publishing company in French-speaking Switzerland – began to take form last year, Tamedia’s empire stretched from Thurgau in the East of the country to Geneva in the West. In addition to many regional newspapers, it controls 20 Minuten, the largest (and possibly the only truly profitable) free newspaper in the country. Also the Tages-Anzeiger and Le Temps, the two largest quality newspapers in Zurich and Geneva, as well as the Bund and the Berner Zeitung.

The other giant facing off with Tettamanti is neither the Neue Zürcher Zeitung group nor Ringier, but rather Switzerland’s massive public service radio and television conglomeration SRG. Similar to ARD and ZDF in Germany, its excessive Internet offers compete directly with private newspaper companies. Richly funded by fees and the complex produces huge daily outputs of video and radio material, available on the Web post-broadcast. Thus, publishing houses find it increasingly difficult to hold ground in the new media world dominated by the public service powerhouse.

Until recently, Switzerland’s media landscape has been rather fragmented (at least in the print sector). However at present it’s facing a shift even more radical than the movement in neighboring Germany. This change is largely unchallenged, as the media failed to monitor the concentration of press outlets in a timely fashion. Only the standard anti-cartel laws exist to impede the development of oligopolies or monopolies.

Yet even titans like Tamedia face obstacles. On one hand, Tamedia may have purchased Edipresse too early, thus overpaying. On the other hand, Tamedia was successful in ridding the market of free newspaper competitors. Two papers (Cashdaily and .ch) recently vanished, one (News) was closed by Tamedia itself, and in western Switzerland, Tamedia fused its two French titles Matin Bleu and 20 Minutes. Thus, only one serious competitor remains in the German-speaking region of the country – Blick am Abend, follow up to former freebie Heute published by Ringier in the afternoon.

But is Tamedia really happy with its free newspaper cash cow? Kurt W. Zimmermann, a former top manager of the company (today an editorial columnist for Weltwoche), itemized the total amount of money lost to 20 Minuten, conceding that the daily earns 20 million CHF annually (roughly $20 million). Zimmermann estimates the collateral damage to all Swiss news publishers may annually reach a whopping 250 million CHF. Losses may be attributed to reductions in subscriptions, single-issue sales and advertising income throughout the 10-year span since 20 Minuten hit the market. Zimmerman assumes only two of the quality papers belonging to Tamedia’s portfolio – the Tages-Anzeiger and the Berner Zeitung – lose 50 million CHF annually due to the freebie. Ever the jokester, Zimmerman appeals to chairman of Tamedia’s advisory board, Piero Supino, in an open letter calling for the immediate discontinuation of 20 Minuten. He refers to the paper as an economic “disaster.”

Yet Zimmermann’s account is one-sided. He faults the free papers for the revenue losses of traditional newspapers as if the Internet had never challenged the industry. Tamedia spokesperson Christoph Zimmer points out that the 10 largest dailies in neighboring Germany suffered greater circulation and advertising losses during the last 10 years than Swiss newspapers, and without competition from free newspapers as they were successfully banned by major German market players.

No matter how you view the situation, Tito Tettamanti‘s investment in the Basler Zeitung is a considerable wager – even if it was purchased at a relatively low price. At present, the foreseeable future shows 20 Minuten remaining profitable, and the Swiss newspapers continuing to publish headlines broadcasting their own demise.

By Stephan Russ-Mohl, published by in Tagesspiegel, February 21, 2009

European Journalism Observatory co-founder and until 2018 Professor of Journalism and Media Management at the Università della Svizzera Italiana in Lugano. Frequent contributor to Neue Zürcher Zeitung (NZZ) and Der Tagesspiegel (Berlin), as well as to the specialist publications Schweizer Journalist and Der österreichische Journalist.
» Media Economics » Swiss Press in Turmoil