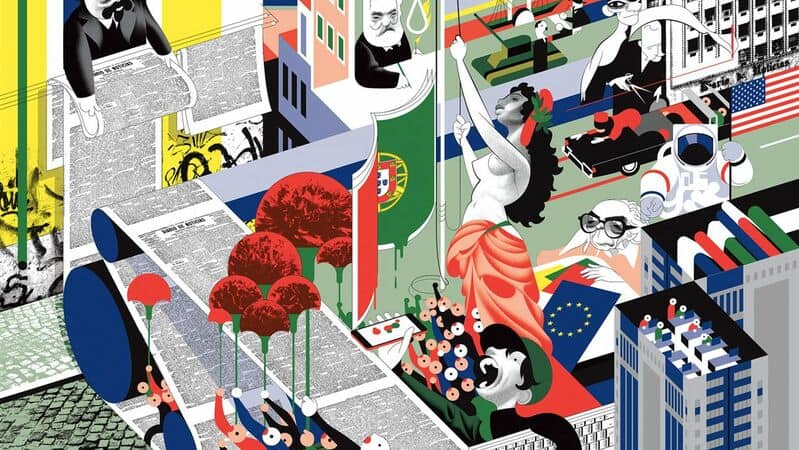 We knew it wouldn’t be easy. Innovation is never straightforward in traditional newspapers like Diário de Notícias (DN) – a legacy daily with a conservative newsroom. But on the other hand we had innovation in our DNA, and that may have made it slightly easier for us.

The launch of Diário de Notícias 154 years ago marked the beginning of the Portuguese newspaper industry. It was the first to be published using a modern industrial process and the first to adopt a new business model reliant on advertising, so that readers didn’t have to pay the full cost of the paper. It was also the first to set great store by objectivity, prioritising facts over opinions.

These were the novel ideas that lay behind the founding of DN. And they all contributed to the expansion of the news market in Portugal in the nineteenth century. The price – ten réis – remained the same until well into the next century. The paper’s motto was “available to every budget, easy to understand by everyone”.

For the first time in Portugal, a newspaper relied for distribution on a network of paperboys, who used to shout the news throughout the streets of Lisbon – another key innovation that contributed to DN’s popularity. A famous statue outside the paper’s original headquarters today pays tribute to the iconic figure of the DN paperboy or ardina.

But times change and in the media business things became tough, especially in recent years. The circulation of the paper version fell, but online audiences were growing steadily. So in 2018 the board made the decision to pivot to digital. DN would from then on concentrate its resources on the online edition, publishing on paper only the weekend edition.

Innovative practice: DN was the first Portuguese paper to use paperboys to deliver the news

It was a radical decision, but in the event the shift proved to be more straightforward than we had expected for the newsroom staff. They didn’t all find it easy, of course – but they did it.

We changed everything overnight – a slightly unorthodox approach, according to generally accepted ideas on how to manage change. On 1 June, the workflow switched to focusing on the digital production. This meant that two main things changed. The first was the publication schedule: news stories appeared online as soon as they were ready to go live. The second was the way in which stories were told – with integrated video, charts, etc.

Before the change, we had a small breaking news department and the rest of the team worked mainly on the paper edition. The online version consisted mostly of adaptations of agency news and stuff that was trending on social networks. After the change, everyone – from the newest trainee to the roving reporters – worked round the clock on breaking news.

The newsflow had to be reorganised. The senior editors decided what should be published and when, and which stories to hold over until the next day’s edition. Such decisions were much more informed than would have been possible before, thanks to the latest analytics.

The most important change to have taken place in newsrooms in the last few years is the use of dashboards for measuring audiences and analytics. At DN we made sure that everyone could see them – on a screen in the newsroom. At first it was a shock for the journalists. But they soon wanted to know more: who had read their articles, for how long, and whether their pieces had played any part in converting readers into subscribers.

As Rasmus Kleis Nielsen and Federica Cherubini put it in their study for the Reuters Institute, “Editorial Analytics”: “what emerges from our interviews is not resistance, but the challenge of helping journalists achieve a real understanding of what the data mean and how to act on this.”

Nielsen and Cherubini concluded that this can be a very addictive and dangerous game to play. It flips the model from the production point of view to a very reader-oriented one. It also arises out of a contradiction that has long been familiar to journalists: “to keep a balance between what the audience needs to know and what the audience wants to know”, as Raul Ferrer-Conill and Edson C. Tandoc Jr write in their study “The Audience-Oriented Editor”.

We were determined not to allow a simplistic interpretation of analytics to dictate our editorial policy. As we underwent the transformation from print to digital at Diário de Notícias, we made sure that we stepped back and gave ourselves time to think strategically.

We decided to pay less attention to meaningless figures and instead look at the more interesting ones: engaged time, how many new readers become loyal ones, churn and conversion rates. We created new roles such as an “off-platform editor” – an editor who handles distribution of the paper’s content on social media channels and any other platform not owned and operated by it. We discussed numbers in an editorial context. And this certainly helped to get us to the next stage of our digital evolution.

Maybe it is “time to step away from the bright shiny things”, to quote the title of a Reuters Institute report written by Julie Posetti. While we need to be aware of the latest developments in the media, especially when it comes to technological innovation, it’s important not to chase innovation for its own sake, without bearing in mind the practical repercussions. Producing better and more useful journalism should always be the primary goal.

At Diário de Notícias, we took the aim of delivering good journalism very seriously. This meant going back to basics. As American digital journalist Kim Bui – who first coined the phrase “shiny things syndrome” – put it, the biggest danger of these shiny things is that they take us “away from storytelling, and we risk forgetting who we are.”

The whole disinformation and fake news phenomenon which became so pervasive in the media actually helped us focus on what we had to do. It was the moment for getting back to Journalism 1.0, to verification, to taking time and looking at things from different perspectives. The way things used to be at a time when we looked for scoops and didn’t just copy what was trending on social media. When we only published what we could confirm.

What’s it all for?

Before embracing change, you have to ask the right questions. The only point of innovation is to help you produce more efficient and interesting journalism. We had to improve efficiency because of market changes. We had to cut costs and find better ways of doing things. This helped us to do a better job and be more useful to our readers.

For Diário de Notícias, being useful means being more accurate and more rigorous. This is our brand – not being fast, but being thorough. As Nic Newman noted in his Reuters Institute paper “The rise of social media and its impact on mainstream journalism”, “news organisations are already abandoning attempts to be first for breaking news, focusing instead on being the best at verifying and curating it.” We are making a contribution to this effort with our fake news investigation project (supported by the Gulbenkian Foundation and in partnership with the University Institute of Lisbon/ISCTE) and our new media literacy programme.

To have a far-reaching impact, innovation has to be a grassroots process. It hasn’t always been this way in the news media. Journalistic outlets often haven’t adapted quickly enough, and certainly haven’t led the way. All too often, digitalisation has come about as a result of market pressure. And perhaps this was also the case at Diário de Notícias. A bit.

As Lucy Kueng says in her Reuters Institute report “Going Digital”, “Legacy organisations can’t pivot but they can shift”. We are after all working in a very old and traditional area of human activity – storytelling. And at Diário de Notícias, storytelling is still at the core of what we do.

If you liked this story, you may also be interested in A Brief Guide to Newsroom Innovation.

Top image: Double-spread illustration by André Carrilho for special edition of Diário de Notícias celebrating the paper’s first century and a half. Reproduced with permission.

Catarina Carvalho is executive editor of Diário de Notícias (part of Portugal’s Global Media Group), where she led the digital transition of the legacy newspaper. She was previously head of editorial at Global Media’s magazines division. She has worked in many newsrooms – including Visão, Expresso, Diário Económico and Sábado – during her 30 years of reporting and leadership.
» Latest stories, Media Economics, Newsroom Management » How Portugal’s oldest national daily switched...