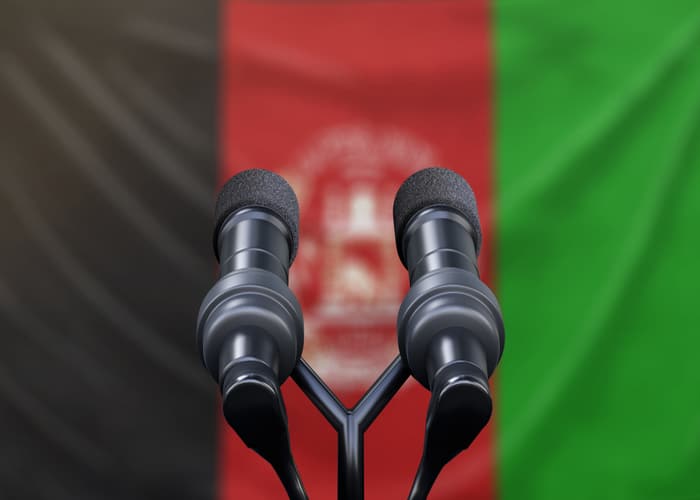 Media in Afghanistan has been flourishing in the last two decades. The Media Landscapes report, a global media systems research project, shows that television is reaching almost half the country’s population, radio more than two thirds, and there are almost 200 active newspapers. Furthermore, more than nine million people have access to online multimedia content.

But is journalism education keeping pace with this rapidly occurring media boom? Currently, traditional academic programmes at public universities in Kabul, Herat, Khost, Mazar-e-Sharif und Nangarhar are very heavy on theory with hardly any practical elements, and uncoordinated with other learning opportunities from private universities and specialist institutions. There appears to be a lack of a unified strategy to provide education and training that would prepare students to sustain and accelerate media development?

This is the focus of a University of Leipzig research project, which was led by communication scientists Professor Dr Arnulf Kutsch und Dr Kefa Hamidi. Based on expert interviews and situation analysis, collected between 2015 and 2019, the study proposes recommendations for the reform of higher education in journalism in Afghanistan.

These are contained in a ‘Handbook of Communication for Development and Social Change’, which will be published online at the end of 2020. It outlines a step-by-step strategy to create and implement a bachelor’s course in journalism and a master’s programme in communication. It also provides recommendations for short training courses for practising journalists, as well as models for bachelor courses in public relations and development communication. The Afghan Ministry of Higher Education has already expressed its willingness to use the plan to help reform journalism education in 12 state universities.

One of the concerns of the University of Leipzig project is the need for a dual education model which integrates and balances theory and practice. An approach which is already shown to be effective in universities around the world. The idea is to give journalists the skills to put events into a social context and produce different types of media.

In this model, students will study the legal, political and ethical aspects of media in Afghanistan, while practising journalistic production. Currently, traditional higher education programmes in the country overemphasise the theoretical aspect of journalism, whereas courses at private institutions focus on practical and technical skills and preparation for the job market.

At a bachelor’s level, students will learn about communication science and the role of the media in society, and practice editorial procedures. An editorial training desk at universities and external work experience can facilitate this. The Leipzig project recommends institutions partner with media companies to offer six-month internships, managed by mutually beneficial contracts.

Another key recommendation of the study is a research centre for communication science, with a research data bank and a trade journal. The idea is to create a group of experts who would then build international networks at conferences and forge collaborations with organisations and associations. This will boost communication science studies and research, ensuring that academics are connected to the rest of the world, aware of global standards and practices and benefit from new developments and innovations. The aim is also to update Afghanistan textbooks and hone the expertise and skills of lecturers.

This networking process will be an important part of establishing a high-quality master’s programme in communication studies in the country. Currently, with no master’s programme in the field, young Afghan academics must go to China, India, or Europe – at great expense. An in-country master’s programme could focus on the impact of the media on politics, economy and everyday life in Afghanistan, and train future university lecturers.

More than just a watchdog

Furthermore, the University of Leipzig research underscores the importance of soft skills for journalists. This is particularly important as the discipline of journalism in Afghanistan exists within a liberal system of financial and power hierarchies. The media follows market forces. Outlets depend on advertising revenues and economic growth.

The transformation of society in the country came with a transformation in the media landscape. Today, anyone with the financial means can set up a TV or radio channel. Therefore, journalism education also needs to evolve to link the sector with the politics, culture and society of the day. Along with practical knowledge, reformed training should include politics or sociology studies, support an understanding of social systems, encourage social skills and critical thinking, and shape moral values and views.

Training should also steer the media away from Western concepts of the profession, where the journalist is primarily a critical watchdog. Instead, mediation should be a key role of the media in Afghanistan. Journalists can support rapid social development and societal change by facilitating dialogues between different social groups and fostering national identity.

The project also recommends introducing a bachelor’s study programme in development communication. Referred to as communication for social change, these programmes are especially important for multi-ethnic countries, such as India – which has over 35 such initiatives. It is also critical for those in the process of transformation such as the Philippines and Indonesia. The aim is usually to educate people to support development processes in their country.

Equally, public relations, though it may not carry the same level of social responsibility as journalism, needs to be recognised as having an important role to play. As such, the handbook includes suggestions for a public relations bachelor’s course. This will prepare communicators in state and civil society organisations to help navigate Afghanistan’s increasingly complex communication processes.

Clearly, meaningful reform will require long-term planning and work. The handbook admits that implementing all these programmes and evolving the Afghanistan higher education sector could take up to ten years. Success is hinged on the willingness of individuals, universities, institutions and government to bring about change.

Encouragingly, the structures in Afghanistan’s society are flexible, and there is an appetite for innovation and long-term change. What the Leipzig research clearly shows is that close collaboration with journalism professionals and academics will help to improve the quality of the media and its positive contributions to society.

Read the first article in this two-part series: The Media (r)evolution in Afghanistan (part 1)