How Trust Is Being Rebuilt In Germany’s Media 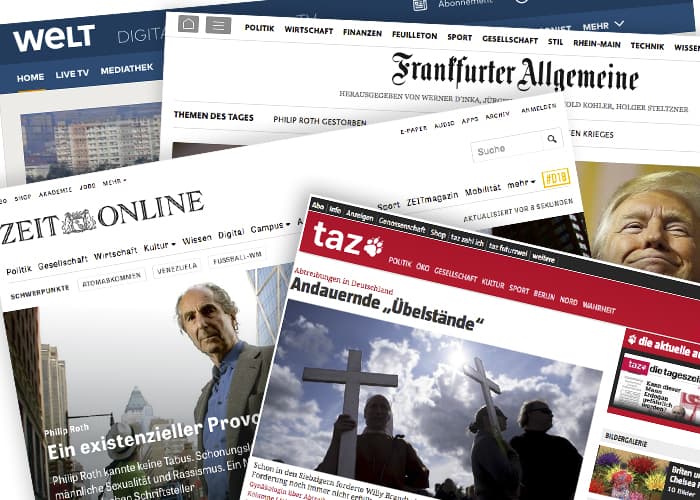 The refugee crisis in Germany in 2015 shook the foundations of trust in the German media. According to a study by “infratest dimap” commissioned by the weekly newspaper Die Zeit, 60 percent of Germans at the time stated that they had little or no confidence in political reporting. Furthermore, 39 percent of Germans said in a survey by the opinion research institute “Allensbach” that they believed that the media deliberately distorted the truth and concealed facts.

At the peak of the crisis, sympathisers and representatives of the right-wing national party “Alternative für Deutschland” (AfD), who saw themselves as Wutbürger (furious citizens), insulted the established media as regierungshörige Lügenpresse (government-serving lying press) and as System-Medien (system media), which were a “bought” opinion cartel of political correctness.

We seem to be on an irreversible path to a “disinformation economy”. How did we get here?

Yet, the erosion of trust in the media in Germany predates these events. With the increasing availability of the Internet on smartphones and tablets, new sources of information have emerged: Bloggers, spin doctors, citizen journalists, social networks and trolls. At the same time, social bots help to spread disinformation, while algorithms have a lasting influence on our consumption of information.

On Facebook and Twitter, indignation, insults, and hate are spreading rapidly among like-minded people. Many prefer to believe people from their own social environment, instead of turning to “the media”. The collateral damage caused by the digitisation is increasing amounts of disinformation, which are intended to sow mistrust. We seem to be on an irreversible path to a “disinformation economy,” according to media critic Stephan Russ-Mohl. How did we get here?

At least for Germany, the dwindling trust in the media has no clear starting point. Bourgeois and conservative Germans had long complained of a lack of diversity of opinion and too much paternalism by journalists in a media landscape which they perceived as largely left-wing and liberal.

It was the arrival of Syrian, Afghan and Iraqi refugees in 2015, however, which revealed, as Der Spiegel editor Isabell Hülsen wrote, what had long been brewing under the surface: a feeling that journalists would no longer report neutrally but wanted to educate readers and test what could be said in Germany.

This unease and distrust in the media was as Götz Hamann, editor of Die Zeit, described it in June 2015, fuelled by the incident of journalists who, after the Germanwings crash in France in 2015, invaded the hometown of suicide pilot Andreas Lubitz like vultures. Equally counterproductive were those journalists from West Germany who were trying to explain the rise of the AfD at around the same time by blaming people in the East of the country.

If fewer journalists are employed and new blood is hard to find, local reporters, in particular, disappear from many people’s lives.

Changes in the industry have contributed to the situation. Job cuts at many newspapers and publishers over the years led to a decline in topic diversity and harmed the quality of coverage. Poor career prospects, precarious working conditions with low pay and the low reputation of traditional media among young people made a career in journalism unappealing for many.

The results were dire and the consequences can be felt all across Germany. If fewer journalists are employed and new blood is hard to find, local reporters, in particular, disappear from many people’s lives. In the German countryside, many readers increasingly see a gap between their everyday life and the topics that journalists in the editorial offices and in the capital Berlin consider important. The German media, or so it seems, is in crisis.

What Has To Be Done?

Credibility in journalism and the media arises locally, nowhere else. It arises where we meet people we trust, people which are not swimming with the stream of opinions, but who form their own picture of what is happening in a town, a district and beyond. Who have a position, but don’t give an opinion. Local journalists, in particular, are the pulse and sometimes also the pacemaker of democracy. Only if they are present on site as reporters and have an ear for the topics and concerns of the people, while keeping a professional distance to those they report on, trust can, again, grow.

Local journalists, in particular, are the pulse and sometimes also the pacemaker of democracy.

But being in touch with what happens outside of newsrooms is not enough. Mistakes in research and reporting should not be concealed, but openly discussed. Journalists should help to reflect a pluralism of opinion – now more than ever before. Readers, listeners and viewers must find themselves in the topics which are reported on in the media. Finally, publishers and broadcasters have to make an effort to explain journalism: People need to understand how the media works. Only then they will learn to fully rely on the media again.

Yet in Germany at least, recent events and what I would call the “lying press” shock have had healing effects on the profession. “Our urge to moralise has become smaller, humility has increased,” stated Isabell Hülsen of the Der Spiegel at the beginning of 2018, a phrase which encapsulates the collective awakening German journalism has experienced. And Germans, maybe unsettled by US-President Donald Trump, have again started to seek orientation in the media. According to a study by the Institute for Journalism at the University of Mainz, at the end of 2017, only 17 percent did not trust the media.

Publishers and broadcasters have to make an effort to explain journalism: People need to understand how the media works. Only then they will learn to fully rely on the media again.

The task of continuing trust and transparency in the media falls largely on the younger generation. Images and posts on Facebook, Twitter and Instagram will never replace a well-researched, factual article in a newspaper or on the radio. That is why it is more important than ever that there will still be young people tomorrow who choose to become journalists. People who, through their reporting, want to become passionate advocates for the preservation of democracy and our open societies.

Never before have digitally open-minded journalists had so many opportunities to put their beliefs and skills to practice: in research, through “mobile reporting” with the smartphone, in globally networked investigative consortiums. Yet they still need support. They need publishing houses, broadcasters and journalism schools who will help them to secure for themselves a future in journalism.

If you liked this story, you may also be interested in Where are all the Women Journalists in UK Newspapers?

Dr Marcus Nicolini is the director of the Journalism Programme at the Journalism Academy of the Konrad-Adenauer-Foundation (KAS) in Berlin and Sankt Augustin near Bonn. In addition, he is the deputy chairman of the works council of the KAS. The KAS is a German political party foundation associated with but independent of the centrist Christian Democratic Union (CDU). The foundation sees the training of journalists as important in strengthening democracy and wants to contribute to journalists’ pluralism of opinion. Until 2006, Marcus Nicolini was dean of studies of the journalism programme at the Institut zur Förderung publizistischen Nachwuchses (ifp) in Munich, the school of journalism of the Catholic Church in Germany. He studied German, Catholic theology and politics in Vechta (Lower Saxony), where he received his doctorate in German studies. Marcus Nicolini was born in 1966, is married and lives in Solingen (North Rhine-Westphalia).
» Comment, Ethics and Quality, Media and Politics » How Trust Is Being Rebuilt In...