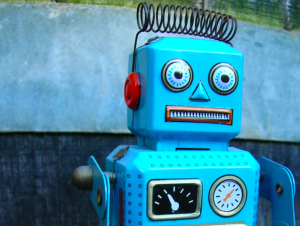 Writing in Der Spiegel online, Sascha Lobo, the German blogger and digital sceptic, recently expressed his displeasure at the rapid spread of “blitz-hatred, bang-stupidity and readiness to violence” openly “spat out” on the web.

According to a new study, however, it is not only human beings, with all their flaws, who influence sentiment online. Research reveals that robots, or social bots, are increasingly trolling on the internet by writing inflammatory texts and comments.

The study into these ‘spamming bots’, led by Simon Hegelich, a German political analyst, examines how, and how often, social bots troll on the internet.

That robots are technically capable of spamming is not open to discussion. They have plenty of opportunity: even serious papers such as Handelsblatt, the German daily newspaper, and the Los Angeles Times, as well as wire services such as Associated Press, among others, have started to use software to create simple journalism.

In an interview with the Südwestrundfunk (SWR), the public broadcaster of south-western Germany, Hegelich said that around 5% of the comments posted on Twitter are generated by machines, but the amount could already be rising to 20%, hypothesised Hegelich.

At the same time, a start-up in California, Verified Pixel, is committed to finding out – with the help of new software – whether and how pictures on the web have been manipulated and therefore falsified.

These are hard times for those who try to spot the needle of truth in the virtual haystack of disinformation and, not least, for journalists. In fact, link-baits, such as Facebook and Twitter, make everything more difficult and journalists risk sinking into the marshes of bullshit.

Nobody seems immune to the influence of digital hatred campaigns launched by robots, not even the big newsrooms. The most dangerous risk, again according to Hegelich, would be that politicians, especially when making decisions on sensitive topics such as migration and terrorism, might be deceived by robot-generated sentiment or by fake pictures.

This has already happened. In Italy, for example, the right-wing populist, Matteo Salvini, has already been caught using a botnet to launch political campaigns on Twitter and influence trending topics on the medium.

This article first appeared in Tagesspiegel, 20/12/2015 and EJO Italy