Internet and Public Opinion in Iran 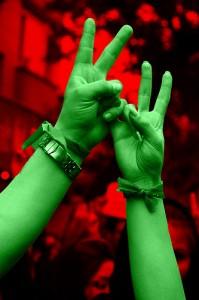 How oppositional journalists and bloggers inform, discuss, and bypass censorship in Iran – all the while risking their lives.

What influence does the Internet have on the formation of public opinion in Iran? Such a question arises with regard to Iran’s backdrop of repression, constricted freedom of expression and government-influenced media. Samira Kügler from the Institute of Journalism at the University of Dortmund, Germany, examines this question in her diploma thesis as she interviews eight oppositional journalists and bloggers, three of whom spent time living in exile. Identities of the interviewees remain anonymous.

Planned well in advance, the interviews occurred (coincidentally) during the most severe riots Iran has experienced in 30 years – incited by the controversial June 2009 presidential elections. Mass demonstrations against the visibly manipulated elections appeared on the agenda as well as the violent suppression of protests by government troops and the detention of hundreds of oppositionists, among them many bloggers and journalists.

Providing a synopsis of her findings, Samira Kügler writes:

“Freedom of speech and oppositional journalism critical of the government would not be imaginable in Iran without the Internet.

The journalists I interviewed utilise the World Wide Web as a main resource for their research. Here, they find information that does not exist in any other medium because print and broadcast outlets are state-controlled and censored. The Internet has become the most important publishing platform for underground journalists. It is an opportunity to publish reports that are governmentally restricted and wouldn’t otherwise be published in official media. Furthermore, the Internet gained importance as a free forum where journalists can communicate with colleagues in Iran and abroad as well as with their audiences.

The Iranian government has one of the most extensive Internet filter systems in the world and deprives Iranian citizens of much information. However, the journalists interviewed are aware of several technical tricks which allow them to gain access to censored content and to then make it accessible to large audiences. Thus, the oppositional journalists have become an important component of the Iranian counter public. They enrich the public opinion formation process – at least in the portion of the population that can access the Internet (35 percent of Iranians thus far).

Aside from the journalists, many Iranians with Internet access utilize the Internet as an outlet for freedom of expression – particularly as they are able to write anonymously. In several Iranian blogs citizens discuss banned music and films from democratic-liberal states or domestic and external issues of Iranian politics.

While leeway for criticism in civil society’s public spaces becomes increasingly limited, critical activities are migrating to the Internet. Non governmental organisations and citizens’ groups network in the World Wide Web and organise political activities. All these components created a form of “cyber counter public” which may influence the country toward a more open, Western-orientated society with a pluralistic structure of information and communication.

The Iranian government, however, has done its utmost to limit the potential of the Internet and to hinder the development of freely expressed opinions and information. This was particularly visible throughout the course of the presidential elections and the resulting constraints of freedom of expression. Thousands of Web sites were blocked, filtered and censored. Hundreds of bloggers, government-critical journalists and opposition politicians were arrested, tortured, threatened and even murdered. For the journalists I interviewed, to write critical texts meant to risk their own lives.

In the election year, journalists took more caution than usual. Even on the Internet self-censorship increased and the bravest journalists wrote under pseudonyms. Explosive topics they were able to cover a few months ago – such as religion – suddenly became taboo again. Internet communication inside and outside Iran no longer felt free, although it was a safer outlet for expression than actual public spaces.

Despite all restrictions, the Internet executed many important functions in Iran that are relevant to the formation of public opinion. Aside from the officially banned satellite television, the Internet has been the only medium that offers rudimentary independent information. It has been vital to communication among government critics, oppositional journalists, activists and for individuals both within Iran and abroad. The Internet serves as one of the remaining possibilities for publishing opinion – even as it grows increasingly dangerous.”