Where are all the Women Journalists in UK Newspapers? 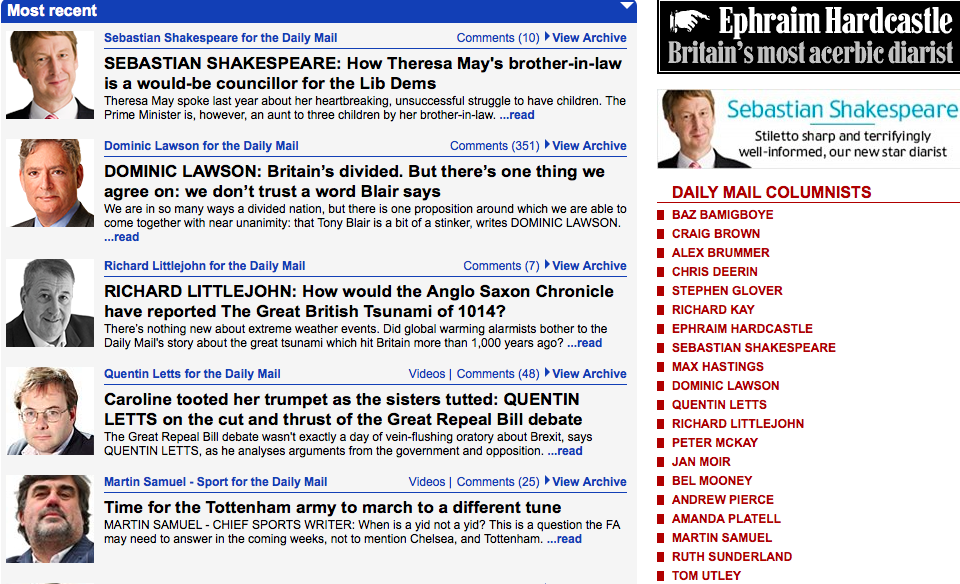 National newspapers in the UK are mostly written by male journalists, even though women make up nearly half of the profession.

A survey of bylines and editorial photographs in the print editions of the Times, Financial Times, Guardian and Daily Mail, each over seven dates during May and August 2017, revealed that three quarters (77%) of comment articles were written by male journalists. Two thirds (65%) of all articles in the news and business sections of the newspapers were by men.

Photographs illustrating editorial content were also mostly of men. Where photographs of women were used, a proportion, in both tabloid and broadsheet newspapers, showed women in bikinis or similar.

The EJO’s survey is intended to provide a snapshot of the way work appears to be divided between genders across a range of print media. Nearly half of UK journalists still work in newspapers according to a 2016 study.


A breakdown of the figures reveals differences between individual newspapers: none of the comment articles published in the Daily Mail on seven different dates were written by women; only one in ten comment articles (11%) in the Financial Times and one in three (33%) in The Times were by women. The Guardian newspaper had slightly more comment articles by female journalists (51%).

The Times had the lowest number of female bylines on news and business articles. Only one in four (25%) of these articles were by female journalists, across the seven editions studied.

The Financial Times had 31% female news and business bylines, the Guardian 40% and the Daily Mail, 44%.

The majority of photos across all newspapers were of men. While half the total number of photos were of men, only 32% were of women, 18% depicted both men and women.

The Financial Times was the newspaper with the most photographs of men on the dates studied. Over the seven editions of the FT nearly two thirds (62.5%) of editorial photographs were of men, compared to only 18% of women (19.5% were of both men and women).

Although the Daily Mail used a relatively high number of photos of women (44% across all issues), a significant number were of women in bikinis or similar. One issue contained 14 pictures of Princess Diana in a bikini, and five pictures of Kate Middleton. Other issues regularly contained revealing photographs of women – but not of men.

The EJO study shows that despite evidence that more female than male journalists enter the profession, men appear to have higher-profile roles as their careers progress.

According to UCAS, the UK’s university admissions body, more women attended journalism school on a full-time undergraduate basis than men, between 2007 and 2014. The same UCAS figures also reveal that despite the higher number of applications for journalism courses from women, men were more likely to be accepted onto the courses.

So why the disparity?

Suzanne Franks, Professor of Journalism at City University and author of Women and Journalism, a 2013 report into gender disparity in the media, believes senior journalism jobs (news reporter or senior editor) are rarely filled by women who have families or other responsibilities outside work, because they are so demanding.

“The relatively few women who do get these jobs at a higher level … are far more likely than men to be childless,” Franks writes. Franks concludes that if newspapers hope to attract and retain women journalists, they must become more flexible.

There are few signs that the message is getting through to national newspapers in the UK.

One female staff reporter – one of only two female journalists employed full-time in the newsroom of her particular UK national newspaper – agrees that the long, irregular hours of news reporting deter many women.

She believes male line managers “only employ people that look like [the male managers], are prepared to put work first – and it helps to be happy to work till 2am where necessary.”

The correspondent, based full-time in the newsroom for over ten years, explained that four months previously she had applied to work from home on occasional days, to enable her to fit work around growing family responsibilities. She was still waiting for a response.

The future for women journalists?

Journalism has come a long way from the 1970s when an internal BBC report quoted a senior (male) editor saying he had “never found any woman with the remotest chance of working [as a news reporter] . . .” “women are simply not able to do hard news stories . . . [but] “see themselves as experts on women’s features”’ (quoted in Women and Journalism).

The BBC recently disclosed that only one third of its 96 top earners are female and that all of the organisation’s top seven earners are men. This disparity is particularly apparent among presenters of the flagship Radio 4 news programme, Today. It was revealed that John Humphreys, a journalist and presenter on the programme, earns between £600,000 and £649,999. His colleague on Today, Sarah Montague, earns £150,000 a year or less according to the BBC.

In 2012, Women in Journalism, a campaigning group for women in the media, studied front page bylines in seven national UK newspapers (tabloid and broadsheet) over a four week period. Their findings were similar to the EJO’s recent survey.

The WIJ study found that 78% of all front page bylines were male; 22% were female. They also counted separately the gender of the journalist whose name appeared first on the lead story, and the results showed a similar trend: 81%, male; 19%, female.

The WIJ study refers to print editions of newspapers as there has so far been little research into gender balance in digital journalism. However, there is evidence that men also dominate the key jobs in the biggest technology companies.

More than 60 past and current employees of Google are preparing a class-action lawsuit alleging sexism and pay disparities against women. They contend they have earned less than men at the company despite equal qualifications and comparable positions.

Their lawyer recently told the Guardian that the women have struggled in other ways to advance their careers at Google due to a “culture that is hostile to women”.

Can women journalists do more?

Zofia Smardz, a Washington Post comment editor, wrote a blog in 2005 titled Just Give it a Shot, Girls to express her frustration over the difficulties of finding women willing to write comment articles: they were too considered, needed time, didn’t want to just ‘knock something out’, she wrote. Adding that she received an average of seven article pitches from male writers to each one from a woman.

Sheryl Sandberg, COO of Facebook and one of the few women to sit on the board of a Silicon Valley technology company, believes that women are reluctant to put themselves forward, or sometimes to take risks, because they lack confidence.

In her book, Lean In, Sandberg writes that women suffer from ‘imposter syndrome’ that makes them believe they are not good enough to take on major responsibilities. She urged women to work harder to overcome any reticence and build their confidence.

Sandberg also suggests there are so few women at senior management level because so many highly qualified women choose either to go part time or to leave work altogether when they start a family. She argues that companies must become more flexible if they hope to retain female staff, but until there are enough senior female managers, this is unlikely to happen.

A former (male) head of an international broadcasting company, now proud of its diverse workforce, told the EJO he had worked hard to change entrenched negative attitudes towards women journalists at his company.

He said it had required a huge cultural shift that could only be brought about through repeated awareness training. “It is all about awareness, awareness, awareness,” he said. “Positive discrimination, quotas etc etc won’t make a difference unless there is a change of culture.”

He said that having a gender balanced reporting staff is a commercial necessity, not a luxury: “we wanted a reporting pool that reflected the diversity of our audience – and women make excellent journalists.”

You may also like: Why are there (almost) no women in sports journalism?

Men writing about men: media and the UK election


The EJO looked at seven editions of the Financial Times, Guardian, the Times and the Daily Mail on May 9, August 1, August 7, 8, 9, 14 and 15. The Daily Mail’s comment pages were counted on all dates except August 21 was substituted for May 9. The study did not include the sports or feature sections of the newspapers. Where arts were covered in the news and comment sections, these articles were included.

Caroline Lees is the editor of the European Journalism Observatory’s English language site. She is a British journalist and has worked for The Sunday Times, London, for seven years including time spent in Delhi as South Asia Correspondent and as a news reporter and arts correspondent. She has also worked as foreign editor and assistant editor of The Scotsman, and for the Economist and Telegraph Media Group.------Hannah Anson is a student and researcher with an interest in media and gender politics.
» Ethics and Quality, Newsroom Management » Where are all the Women Journalists...