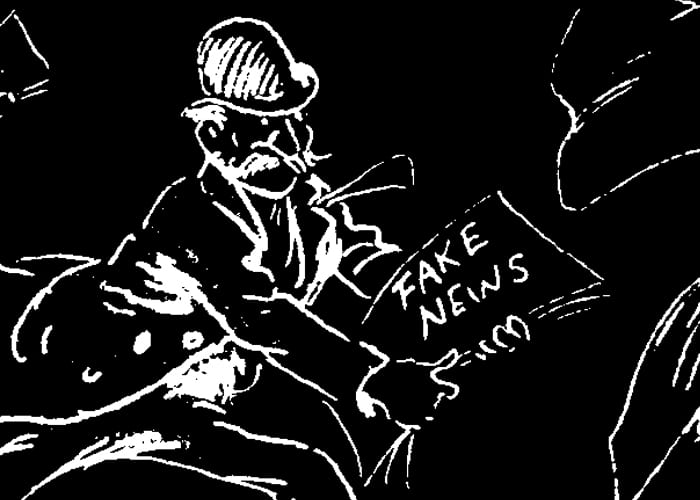 In Ukraine, such stories are tracked by Stopfake, a project founded in 2014 by young local media experts and students. But the operators of this fact-checking website still have a lot to do. In December 2017 alone, they had to correct Russian fake stories every few days – including the claim by the Sputnik news agency that the EU Commission accused the UN of spreading false reports of human rights violations in the Crimea.

False Stories Wherever You Look

Made up, too, was an announcement that Ukraine’s President Poroshenko wanted to separate the Donbass from Ukraine with a wall, says Dariya Orlova, a researcher at the Mohyla School of Journalism in Kiev. Other stories have tried to suggest a “normalisation” of the situation in the country: Several Russian channels broadcasted a story about a rush of Ukrainian tourists to the Crimea. None of this was true, the story was completely invented.

In other Eastern European countries, false stories occasionally spread like wildfires, too. One of them, according to Sandra Stefanikova (Charles University, Prague), was a false report about a radioactive cloud coming from a French nuclear power plant. The story was shared widely on social media. In the Czech Republic, many obscure websites circulate such stories, but their operators mostly remain in the dark.

According to Gabor Polyák (University of Pecs) and Michal Kus (University of Wroclaw), false news stories have also become a political tool. In politically polarised countries like Hungary and Poland, the opposition regularly accuses the government-controlled public service media of broadcasting “fake news”. Political divisions in both countries run so deep that opposing parties constantly accuse each other of spreading disinformation

While most of the mainstream media in Central and Eastern Europe continue to perceive misinformation and propaganda from Russian and Russian-friendly media as a threat, Polyák says that in Hungary, public broadcasting is paying more and more attention to Russian propaganda, a finding confirmed by other sources. Most of the traditional media are and remain well under Prime Minister Viktor Orbán’s control.

The Situation in Romania

In Romania, too, “fake news was not invented just now,” says Raluca Radu, the director of the journalism program at the University of Bucharest. More politicians than before are coming up with their own conspiracy theories – and more journalists citizens are exposed to such stories. For example, Livizu Dragnea, the leader of Romania’s ruling Social Democrats, claimed that the philanthropist George Soros has close ties to foreign intelligence services – a conspiracy theory also heard in other Central European states.

Romanian fact checkers have no chance to keep up with the counterfeiters among politicians, says Radu. Even established media occasionally use false reports to attack each other. Just as if to prove the talent of her compatriots, Radu points to her fellow countryman Ovidiu Drobotă. He is said to have invented the story that Pope Francis supported the presidential candidacy of Donald Trump – a story that went viral like few others.

The Fight against “Fake News” as a Topic of Public Discussion

A popular target of fake stories in Eastern and Central Europe is Germany and its chancellor Angela Merkel. Due to its size, economic power and history, Germany is particularly suitable to stir up fear and hate. In Eastern Europe, for example, “alternative media” tenaciously stick to the narrative that the Germans are on the verge of gaining control of all Europe, reports Silvia Stöber who works for the Faktenfinder (fact finders) of the German public broadcaster’s daily news show Tagesschau.

The conspiracy theorists are usually well connected with each other. They rely, according to Stöber, on German-language alternative sources. Quite often, they reproduce German media wrongfully or claim that dubious online surveys are representative of the public opinion. For instance, a Czech website cited a poll by the Swiss blog Alles Schall und Rauch, according to which Angela Merkel had been voted “the biggest liar among politicians in 2015”. The story was later even picked up by the state-owned Iranian channel Press TV.

Sandra Stefanikova sees educational measures and the labelling of “fake news” as such by independent fact checkers as the most important steps to stem the flood. So far, however, only a few independent platforms and Facebook groups dedicate themselves to this task. Stefanikova says she also has doubts whether the topic is resonating outside major cities and outside of certain educated and politically interested groups. In the Czech Republic, she says, there were “rumours that Facebook wants to do something against fake news”, but so far nothing had happened. “Neither Facebook nor Twitter have an office in the Czech Republic – except for marketing purposes,” says Stefanikova.

No Bots in Eastern Europe?

One thing that is, according to researchers, hardly noticed in these countries are social bots. These robots can write, “like” and share messages and thus, it is claimed, massively distort public opinion in social networks. In the case of the Czech Republic, Stefanikova suspects that their absence is due to the Czech language, which cannot be easily automated. In Poland, too, the discussion is more focused on the “human factor”, especially trolls rather than bots, says Michal Kus. For Ukraine Dariya Orlova also emphasizes how difficult it is to prove their influence.

Central and Eastern European media observers also suspect that media users in their countries generally are less impressed and influenced by the Kremlin’s spin than are their Western neighbours. Reid Standish, who works for the journal Foreign Policy and is responsible for Russia, Ukraine and Central Asia, says he observed a sharp increase in fake news and propaganda in Finland, the Baltic States and other Eastern European countries after the Russian annexation of the Crimea. Finland’s long history as a neighbouring country of Russia forces the country to repeatedly deal with Russian attempts to influence public opinion. Yet, while others struggle Finland is well-armed against such attacks – thanks to its strong public school system and a government that react to propaganda attacks both cunningly and professionally.

The best defence is not to correct the misinformation, “but to oppose it with a positive narrative,” says Jed Willard of Harvard University. He has advised the Finnish government on how to combat fake news and propaganda. The EU has recently set up its own group of experts to develop strategies to combat disinformation. In Ukraine, however, a certain “fake news fatigue” has by now developed says Orlova. Yet, media experts in Ukraine hope that the West has finally woken up to what they see as a major threat.

While many in Eastern and Central Europe are concerned, researchers are careful to attribute too much importance to fake news. Many argue that the term itself is misleading and should not be used any longer as it can mean so many different things. The Reuters Institute at the University of Oxford recently published a Fact Sheet on “Fake News” in Europe, which questions their impact.