Seymour Hersh: How To Be A Better Investigative Reporter 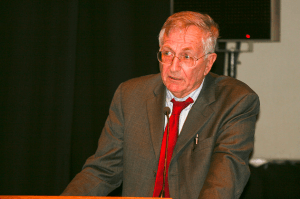 Faced with fierce attacks for a recent story, Seymour Hersh, one of America’s most legendary and revered journalists, recently addressed more than two hundred investigative reporters from around the United States to talk about his reporting technique.

Hersh, a regular contributor to The New Yorker magazine has been criticised for a piece that ran in the London Review of Books last month, in which he challenged the official version of the killing of Osama bin Laden. He accused the Obama administration of lying about key facts in this military operation.

As a result, a phalanx of reporters, former government officials and spokespeople for the Obama administration charged Hersh with spinning a conspiracy theory by relying on unreliable, anonymous sources.

While some of Hersh’s claims were supported by other news outlets, the firestorm of criticism has not subsided yet. Hersh is used to controversy, especially over his use of anonymous sources, however he won the Pulitzer Prize for exposing the My Lai massacre during the Vietnam War and was instrumental in shedding light on the abuse of detainees by U.S. military at Iraq’s Abu Ghraib prison.

At the annual conference of IRE (Investigative Reporters and Editors) in Philadelphia, Hersh – with uncharacteristic restraint – did not take on his critics directly. “I don’t like defending what I write,” he said. “Let time take place. It’ll come out.”

In laying out his personal approach to investigative reporting, Hersh offered some insight into his strategies.

Here is a summary of his axioms:

Find valuable sources. “Think about someone who’s inside, who’s invaluable because of his brains and his ability and who’s also not afraid to be critical of the policy and not afraid of the consequences. That’s a rare thing to happen. And when you have that you’re in business. And that’s what I have. Other people don’t. Tough luck. I’ve been around for 45 years.”

Protect your sources. Hersh insists that some investigative stories can only be done by granting anonymity to sources. He goes to great lengths in covering traces to information that might identify his sources. “Nothing in the computer,” he advises.

Be critical but don’t be cynical. “Don’t underestimate the amount of goodwill and good people in the intelligence community and in the military. There are people who really don’t like what’s going on, who are invested in their community, they don’t like lying.”

Stay your course. Seemingly unfazed by the recent barrage of criticism, Hersh said: “The ultimate thing for me is truth.”

Thomas Schmidt is a doctoral student at the School of Journalism and Communication at the University of Oregon. Prior to his academic career, Thomas was a reporter for Kleine Zeitung, Austria’s second largest daily newspaper, the monthly narrative magazine Datum, and ORF (Austrian Broadcasting Corporation). He also served as the inaugural director of “biber-Akademie”, a training program for young would-be journalists from immigrant families in Vienna.
» Specialist Journalism » Seymour Hersh: How To Be A...