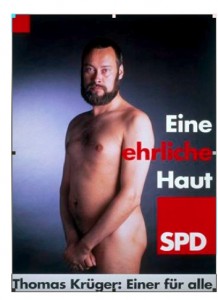 In advertising, a single catchword may move mountains.

In research however, such buzzwords often create trends unable to withstand a diverse reality. For decades, many social science researchers have used the phrase “Americanization” with regard to our living conditions – a formula that on closer inspection does not hold, as researchers have recently illustrated on two very different communication fields. At an annual conference of Swiss communication and media scientists dealing with visual communication, media researchers Roger Blum and Marlis Prinzing questioned the Americanization hypothesis in the field of party competition and campaigning. According to Blum and Prinzing, campaign planners no longer look  to the U.S. when conceptualizing election campaigns.  Researchers now prefer to discuss the “modernization, professionalization, mediatization and de-ideologization” of the election campaigns.

Their most radical example is that it would be unthinkable in the U.S. to display individuals in the nude on campaign billboards or posters, whereas in Germany several candidates have undressed – and as their creative and extreme “transparency” was appreciated by many voters, this approach found imitators in Switzerland, Belgium and Poland. On further inquiry Ms. Prinzing emphasizes that the Americanization hypothesis is “also a distraction, especially if the media are referring to it.” It tends to be misunderstood “as a synonym for Hollywood-like election campaigns,” and therefore leads us to “ignore how important issues are in the U.S., and that these are also discussed and transported via the media.”

The example of nude politicians indicates that campaign planners are observing one another internationally and vice versa – a behavior that could be advisable to journalists and media managers searching for new models as the Americanization hypothesis seems dubious with regard to the media business. At least researchers at the Reuters Institute for the Study of Journalism at the University of Oxford are not all sure whether the American journalism crisis will surface similarly Europe.  According to David A.L. Levy and Rasmus Kleis Nielsen it was premature to forecast the death of newspapers, TV or commercial news media. In their new book dealing with changing journalistic business models they foresee entirely different trajectories in different European countries, in the U.S, and in the BRIC-states Brazil and India. “If the big news media in America have to cope with a more serious crisis than anywhere else, then this does not necessarily mean that they pave the way for the rest of the world. The U.S. could rather be an exception – instead of the forerunner as which they are depicted in the discussions about the international media development.”

That the Americanization hypothesis is dubious is further illustrated by the fact that years ago American researchers such as Everette Dennis conversely observed a “Europeanization” of journalism in the U.S.  This view surfaced as many news outlets were accused of no longer separating news and opinion, or because TV networks like Fox build success on politically one-sided (right-wing) populism.

A similar term has haunted the Eastern European research journals for years now: “Berlusconization.” A renowned researcher introduced the term, kick-starting its frequent usage by many others more or less thoughtlessly. “Boulevardization” picked up as well – this would have hit the bull’s eye, and also “Italianization” would perhaps have made sense, as the emphasis would have laid on the growing political control and “entertainization” – or even  “infantilization” of the media, as Umberto Eco once stated regarding the conditions in his home country. But Berlusconization? Young Eastern and South Eastern democracies should actually be grateful that they’ve been spared the overwhelming power of a media magnate like Berlusconi and his long lasting abuse of authority cushioned by the media. Also sustained in part because of the (certainly not altruistic) engagement of Western investors who usually keep out of political issues, such as Ringier and Springer, the Passauer Publishing Group and the WAZ-group as well as Scandinavian media companies like Schibsted.

Apparently researchers are not beyond using buzzwords, especially as they too hope to have a large impact – even though by engaging in buzzwords, they neglect the type of clarification research should actually ascribe to.


Levy, David A.L. /Nielsen, Rasmus Kleis (eds.) (2010): The Changing Business of Journalism and its Implication for Democracy, Reuters Institute for the Study of Journalism, University of Oxford