Resetting the relationship between police and press: new guidelines 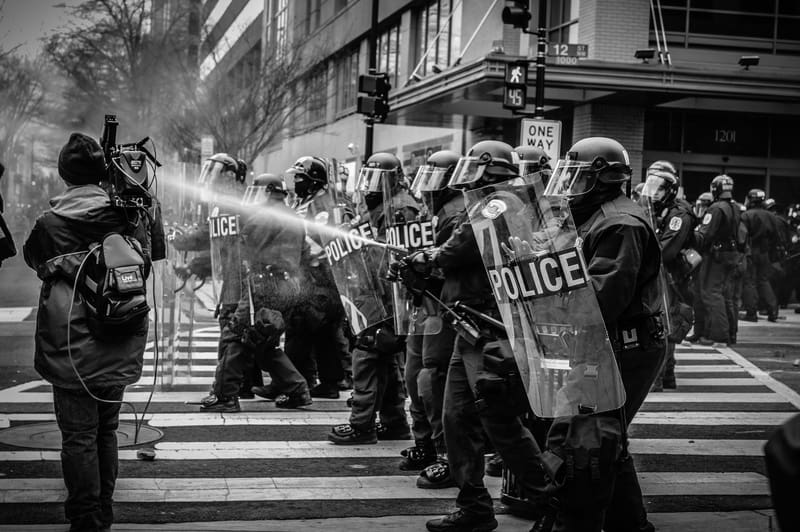 Journalists who cover protests are often seen as targets by both demonstrators and the police.

The relationship between journalists and the police is a complex one. Although these two institutions should be able to cooperate in the interests of the public, relations between them are frequently tense and occasionally even descend into violence. In an effort to improve this situation, several bodies devoted to defending freedom of expression in Europe recently drew up the first code of conduct setting out guidelines for the police on how to interact with journalists. Sofia Verza takes a look at this “Press Freedom Police Codex”.

There can be few professional groups that are as suspicious of each other as journalists and the police are, with both sides harbouring prejudices towards each other that tend to be mutually reinforcing. The recent launch of the Police Codex – drafted by the European Centre for Press and Media Freedom (ECPMF) and several other European organisations that campaign for freedom of expression and the rights of journalists – is thus a particularly significant development.

The Codex was launched at an event in Brussels last December, which was attended by representatives of the organisations involved in its creation plus Peter Smets, the Belgian representative of the European Confederation of Police (EuroCOP).

The Codex is the first ever code of conduct to enshrine guidelines for the police on how they should behave towards journalists in various situations. Not only does it cover what are potentially the most fraught situations, such as protests and demonstrations, it also deals with issues such as the surveillance of reporters and their sources. The question was raised by Smets: “Why should we be particularly bothered about journalists? Certain types of abuse should not happen, whether against journalists or any other citizen.” This is true: rights and guarantees such as freedom of expression should be guaranteed to everyone. But freedom of the press deserves special protection, because the right of citizens to be informed is also protected under its umbrella.

The Codex consists of eight guidelines that provide essential starting points from which to build a more collaborative and less conflictual relationship between journalists and the police: 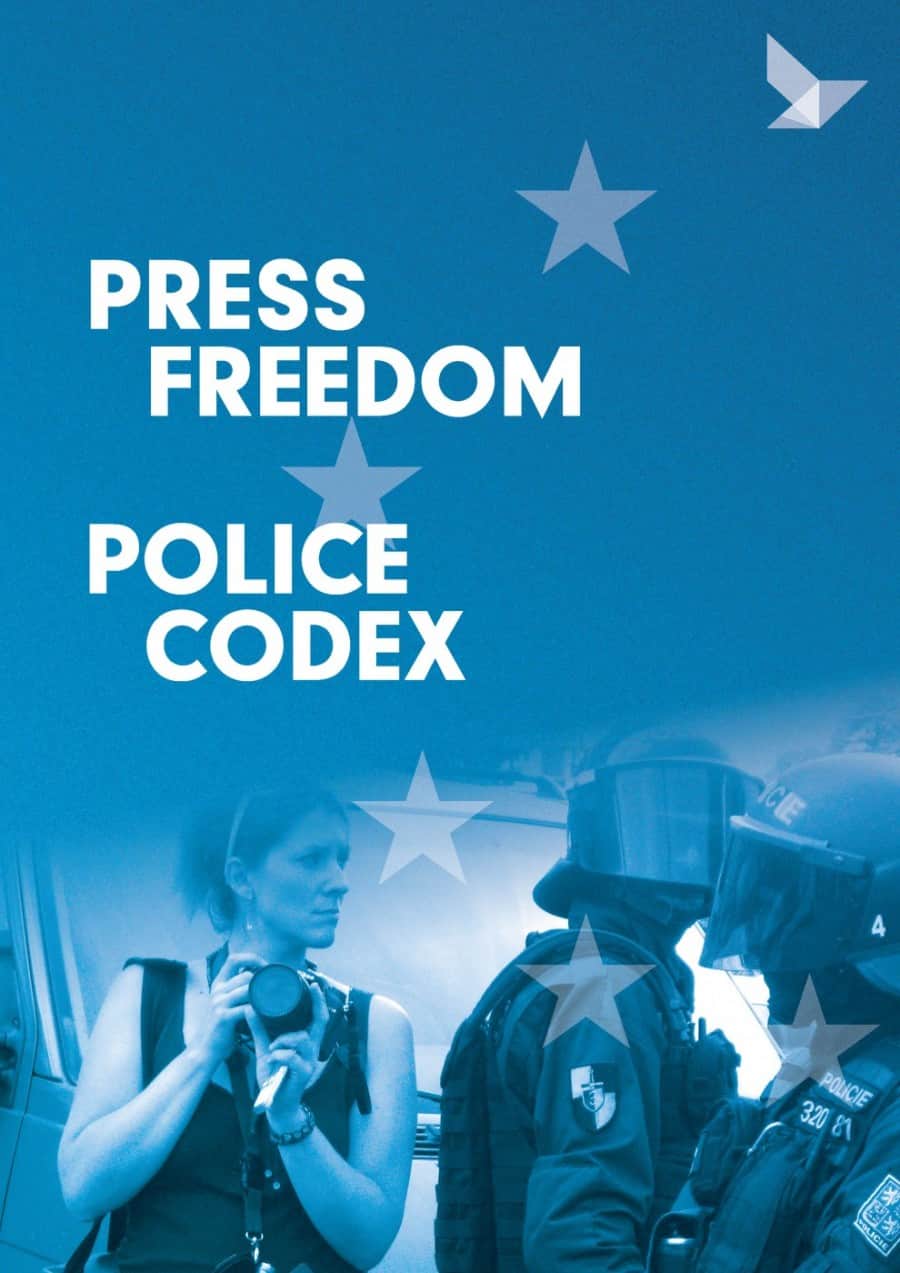 The most obvious area of potential conflict covered by these guidelines is that of physical confrontation, which occurs in situations such as strikes and demonstrations. In 2019 alone, there were many instances of police physically abusing journalists covering protests such as those of the Gilets Jaunes in France, where around 120 incidents were reported. There were also around 70 reported incidents of the physical abuse of journalists covering independence protests in Catalonia. And in Germany, notably in Saxony, the police failed to intervene to protect journalists who came under attack while covering demonstrations held by far-right groups.

Another recent case of police violence against a journalist is that of Stefano Origone, who was beaten up in Genoa last May while covering an anti-fascist demonstration for La Repubblica. This case is relevant to guideline No.7 in the Codex. According to a ruling passed by the European Court of Human Rights (ECtHR) in response to the case of Alikaj and others v. Italy (2011), investigations into alleged police misconduct should be carried out by an independent authority. Despite this principle established as a result of the Alikaj case, the investigation into the assault of Origone was entrusted to the police themselves – the same body suspected of having committed the abuse against him.

Guideline No.6, which was prompted by disquiet over some of the methods of surveillance over journalists and their sources practised by the police, has given rise to much debate. A key verdict in this connection is that of the European Court of Human Rights (ECtHR) in the case Big Brother Watch v. the United Kingdom (2018), according to which the UK authorities were found guilty of having violated the right to privacy and freedom of expression of the journalists involved. One thing that the British police did was to use anti-terrorism legislation to obtain recordings of the telephone conversations of a Sun journalist, in order to carry out an indirect investigation into one of his sources for a story about political corruption.

Two essential aspects of this ruling also crop up in connection with many other cases of police surveillance of journalists, both in Europe and elsewhere. One is the use of special legislation such as anti-terrorism legislation to bypass the need to obtain prior judicial authorisation for certain kinds of operation. The other consideration is that often, the main target of surveillance is not the journalist per se, but his or her sources. However, as the ECtHR pointed out, the protection of sources is crucial for the defence of press freedom, as these sources are of key importance to journalists carrying out investigations that are in the public interest.

Finally, when drawing up a European code of conduct, we should bear in mind that the practices of different police forces and the likelihood of a dialogue between them and the media differ greatly from one country to another. The situation in Belgium, as described by Peter Smets, can hardly be compared with that in Spain or Turkey. In some places, for media workers it makes no sense to complain about being harassed by the police – as the Bosnian journalist Ivan Begić, who was beaten up while covering a demonstration, has pointed out – because of a widespread awareness of the impunity enjoyed by police officers.

We therefore need to take into account the different cultural backgrounds and attitudes towards the separation of powers prevailing in different European countries: as Smets pointed out, the management of police forces is still considered to be an internal matter – an aspect of individual states’ sovereignty that cannot be surrendered – which makes it difficult to work in collaboration with international bodies and to establish common standards.

Education is key, and it would certainly be a step in the right direction if the organisations involved in drafting the Police Codex together with ECPMF – Osservatorio Balcani e Caucaso Transeuropa, European Federation of Journalists, Index on Censorship, Ossigeno per l’informazione and South East Europe Media Organisation – could keep the collaboration with EuroCOP going and organise training sessions devoted to the role and rights of journalists for police forces in different countries.

The relationship between the police and journalists needs to be reset to make it less conflictual and more collaborative. In philosophical terms, the ultimate goal of both professions should be the same: to work for a fairer, more transparent and safer society.

This is a slightly abridged version of an article that first appeared on EJO’s Italian site on 20 January 2020, when it was co-published with the Osservatorio Balcani e Caucaso Transeuropa.

If you liked this story, you may also be interested in Police Use Anti-Terror Law to “Spy” on UK Journalists

Sofia Verza is a PhD candidate in the department of political science at the University of Perugia. She is carrying out research into the relationship between the media and policy making, national security and freedom of expression, especially in Italy and Turkey. She has collaborated with Osservatorio Balcani e Caucaso Transeuropa (OBCT), European Centre for Press and Media Freedom (ECPMF) and Columbia University’s Global Freedom of Expression project.
» Media and Politics, Press Freedom, Recent » Resetting the relationship between police and...