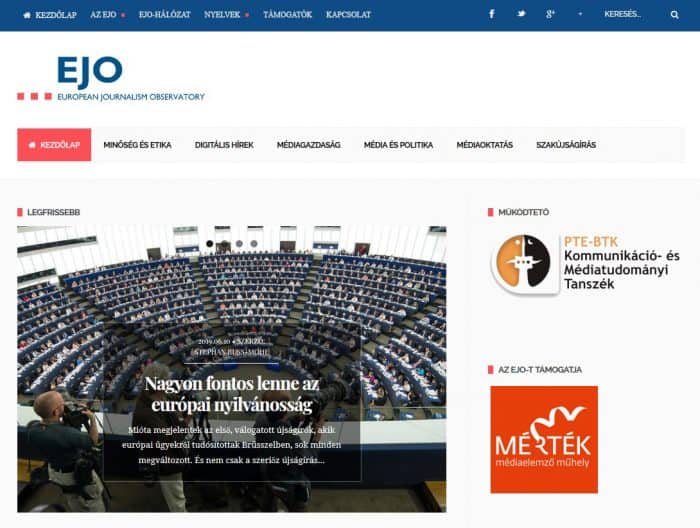 The addition of EJO Hungarian brings the number of languages covered by the network to 15.

EJO Hungarian has now become a fully-fledged member of the EJO network of websites.

The official launch of the Hungarian-language site has been eagerly awaited within the network, as developments in the Hungarian media have attracted a good deal of attention over the last few years.

The current political situation in Hungary has had a far-reaching impact on the Hungarian media environment, with the result that practising journalists, media analysts and journalism scholars throughout Europe and beyond are keenly interested in keeping themselves informed about the state of the media in the country.

The aim of the Hungarian site is thus two-fold: to make the latest research into European and global media accessible to Hungarian journalists and media researchers, and to highlight aspects of the Hungarian media likely to be of interest to a wider audience.

In keeping with the EJO’s mission, EJO Hungarian will inform Hungarian journalists, media academics and students about developments in their media and those of their European counterparts. In turn, EJO websites across the network will publish articles about the Hungarian media translated into other European languages.

EJO Hungarian will focus on issues such as press freedom, new media, media economics, media politics and media education. It will also look at more specialist kinds of journalism such as data and collaborative journalism.

EJO Hungarian is funded by Mérték Média Monitor, a Hungarian NGO concerned with media policy issues and managed by the Department of Communication and Media Studies at the University of Pécs.

The project director is Dr Gábor Polyák, associate professor at the University of Pécs and head of research at Mértek Média Monitor. Dr Polyák conducts research into and lectures on media regulation, media policy and IT law.

The editor of EJO Hungarian is Annamária Torbó, who is currently an assistant research fellow in the Department of Communication and Media Studies at the University of Pécs. Her main research interests are trends in international journalism and journalistic skills related to new media. For her PhD, she is researching into popular culture.

Hungarian journalist Kornélia R. Kiss, currently an EJO fellow on a European Journalism Fellowship at the Freie Universität Berlin, has helped to prepare for the launch of EJO Hungarian by reporting on the Hungarian media for other EJO languages sites and translating articles originating on the other sites into Hungarian.