Research: Journalists Believe They Will Work Harder In Future, With Less Support 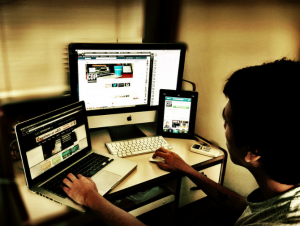 Journalists believe journalism will be a harder job with less institutional support in the future, according to a survey conducted by the Reuters Institute for the Study of Journalism and the Society of Professional Journalists.

The research found journalists are concerned they will have to work harder, engage in personal branding and entrepreneurship, and cannot count on stable employment, full-time jobs, or indeed life-long journalistic careers. Nevertheless, they do not fundamentally believe journalism will be less satisfying or less independent and generally see journalism as a relatively stable collection of fundamental practices and techniques that is neither dependent on medium, nor existentially threatened.

Download the full report of the study ‘Journalists’ Perceptions of the Future of Journalistic Work’.

Members of Society of Professional Journalists were asked to complete the survey and other journalists in North America and Europe were sought via journalists’ sites and social media. The survey taken between October and December 2014, generating 509 total responses.

Because of the selection method, the results should be primarily viewed as indicative of how journalists generally perceive the future of work in their profession. Respondents were asked 20 questions about their perceptions of journalistic work, labour, and professional identity using a 5-point scale from strongly disagree to strongly agree.

The survey is part of the Reuters Institute’s Future of Journalistic Work Project that is exploring how changes in the business of journalism and journalism practice are affecting journalistic work and employment. – See more at: https://reutersinstitute.politics.ox.ac.uk/publication/journalists%E2%80%99-perceptions-future-journalistic-work#sthash.Vc3Me2Tt.dpuf

Professor Robert G Picard is a specialist on media economics and government media policies. He was formerly based in the Media Management and Transformation Center at Jönköping International Business School in Sweden where he was Director of the Center and Hamrin Professor of Media Economics.He is the author and editor of 28 books, and has been editor of the Journal of Media Business Studies and the Journal of Media Economics.Robert is the Reuters Institute North American Representative and directs projects across the main RISJ research areas examining changes in the business of journalism, the practice of journalism and journalism and accountability.
» Recent, Research » Research: Journalists Believe They Will Work...