Albania’s Media: A Market Too Small To Survive? 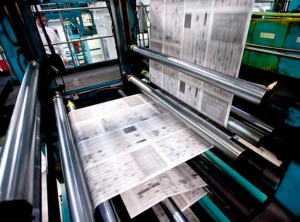 Albania’s small population, combined with a high number of media outlets, have made the country especially vulnerable to the global economic crisis. The market is too small to survive the upheaval and over the last 12 months a number of major legacy newspapers and television channels have been forced to close.

Until two years ago Albania, which has a population of only three million, had 22 national daily newspapers, one of the highest numbers in the region. By the end of 2015 there were also two national television stations, two satellite channels, one foreign channel (TV5 Monde) and 66 local television channels that broadcast in analogue.  There are also 83 cable television channels, spread all over the country. Albania has one public broadcaster (RTSH) which has three local branches. There are also three commercial digital platforms: Digitalb, Tring and Supersport.

There has also been a dramatic fall in income of those that do survive. Some have migrated their businesses to online web portals or blogs: more than sixty news portals and websites have opened during the last two years, including those of the best known media.

Advertisers are paying less for the same space


The main source of income for the Albanian media has been, and remains, advertising, with the biggest spenders being the telecommunications industry and banks.  But the economic crisis that has affected almost all sectors of the economy has led to a yearly decline in the media advertising market.

According to analysis by IDRAMEDIA, monitoring consultants, Albania’s advertising market decreased by ten percent during 2015, dropping from 37 million euros to around 33 million over twelve months.  The economic magazine, Monitor, says one of the biggest advertisers in the country, ALBtelecom, more than halved its advertising budget last year.  Mobile companies such as Vodafone and Telekom Albania (formerly AMC) also significantly reduced their budgets. However, it is worth noting that advertising time and space did not decline; these companies simply paid the media less for the same amount of ‘ad units’ in 2015 as in the previous year.

The print media took the biggest blow from advertising budget cuts.  According to IDRAMEDIA, most newspapers’ revenue declined. The largest was seen in Gazeta Shqiptare – a drop of 54% –  and Koha Jonë  – a fall of about 50%.  Other national newspapers also suffered. Dita decreased by 16%, while Shekulli and Shqiptarja by 15% each.  Only Albania’s top selling newspaper, Panorama, which has a larger circulation than most other newspapers (around 20,000), had a relatively small reduction of 3.5%.

A decline in ad revenue is also noticed in television media, which receives three quarters of the country’s total advertising budget. As with print media, advertisers are now getting the same amount of advertising space for less money. The three largest stations – Top Channel, Klan and Vizion Plus, have all allocated the same airtime to advertising, but have  received less income.

The only category to show an increase in advertising income is online media, but overall the revenue represented only 4.5% of the total advertising budget.

Acknowledging the gravity of their situation, media outlets are trying to find innovative ways to avoid bankruptcy.  One success story has been the so-called ‘convergence’ of the TV channel, newspaper on online portal belonging to the Free and Fair Media group, founded in 2012.  According to Monitor, the converged newsroom achieved an increase of 60% in profit in 2014 and similar growth last year.

Today, almost all the most famous names in Albanian media have a web presence.  However, the income produced online is very modest.  Unlike that of Western countries, Albanian news portals’ main source of income remains the most traditional – advertising. Practices such as Pay-per-click, Google Ads or sponsored content have not yet been introduced. The main reason for this is size.  Like most other small countries, Albania gets very little in return for what it contributes to online-generated global revenue.

There is no data but Albanian online media experts believe that global online companies like Google and Facebook make a good profit from Albanian companies. But in turn, because of the small market, there are no Google ads in Albanian online media. Google has also excluded small countries like Albania from It’s Digital News Initiative.

Albania’s small market means the media’s chances of surviving the current global crisis are much slimmer than that of countries with bigger populations.

Rrapo Zguri is a lecturer of new media and online journalism at the Department of Journalism and Communication, University of Tirana, Albania. He received his PhD in media and communication from University of Tirana. He has worked for several Albanian newspapers as a reporter, editor and editor-in-chief. Mr. Zguri is the author of several scientific articles and textbooks regarding new media, blogosphere, internet ethics, and social media. His research interests also include web and print media layout and designing. Mr. Zguri is the web editor of the Albanian EJO site.
» Business Models, Media Economics, Recent » Albania’s Media: A Market Too Small...