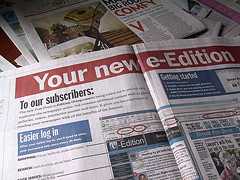 As digital news consumption grows, can salvation really be found in a new business model? A new report released this month by the Pew Research Center’s Project for Excellence in Journalism (PEJ) paints a bleak picture for the future of the newspaper industry.  The report, titled, “The Search for a New Business Model: An in-depth look at how newspapers are faring trying to build digital revenue” gathered information by interviewing executives from 13 different media companies in addition to surveying 38 newspapers from the United States.

While many newspapers struggle to recover from staggering print losses, the report suggests some papers find success in augmenting profit loss with digital revenue projects.

Unfortunately time may be running out for many of the newspapers included in the study. Of the 38 newspapers providing data for the report, overall newspaper revenue had fallen by 40 percent in the last decade and print advertising dollars were lost at an average of seven times the rate digital ad revenue was growing.

Authors of the PEJ report attribute these losses to the fact that 92 percent of the advertising revenue generated by the newspapers included in the study still come from print sources.

But not all newspapers are struggling.  Several examples of individual successes can be found in the PEJ report, with most of the newspapers attributing their achievements to business model revisions and an emphasis on digital assets.

For example, one newspaper included in the report saw significant revenue growth by selling targeted advertising based on individual browsing histories. Another newspaper grew digital revenue by building a consulting business which functioned as a guide in order to help other businesses market themselves digitally.

Unfortunately it appears as though many newspapers are dragging their feet in making the decision to transition. For example, PEJ authors found that among the papers providing data for the study, “the number of print-focused sales representatives outnumbered digital-focused reps by about 3-1.”

One news executive put it best when explaining how a transition to a digital business model is potentially dangerous to a fledging newspaper: “There might be a 90 percent chance you’ll accelerate the decline if you gamble, and a 10% chance you might find the new model. No one is willing to take that chance.”

Michael Wise is a Master’s student at Università della Svizzera italiana, studying Health Communication and Management. He has a bachelor’s degree in journalism and has written for a number of magazines and trade publications, in addition to being an EJO contributor and student assistant since September 2011.
» Newsroom Management » Digital Revenue Vital for Struggling News...