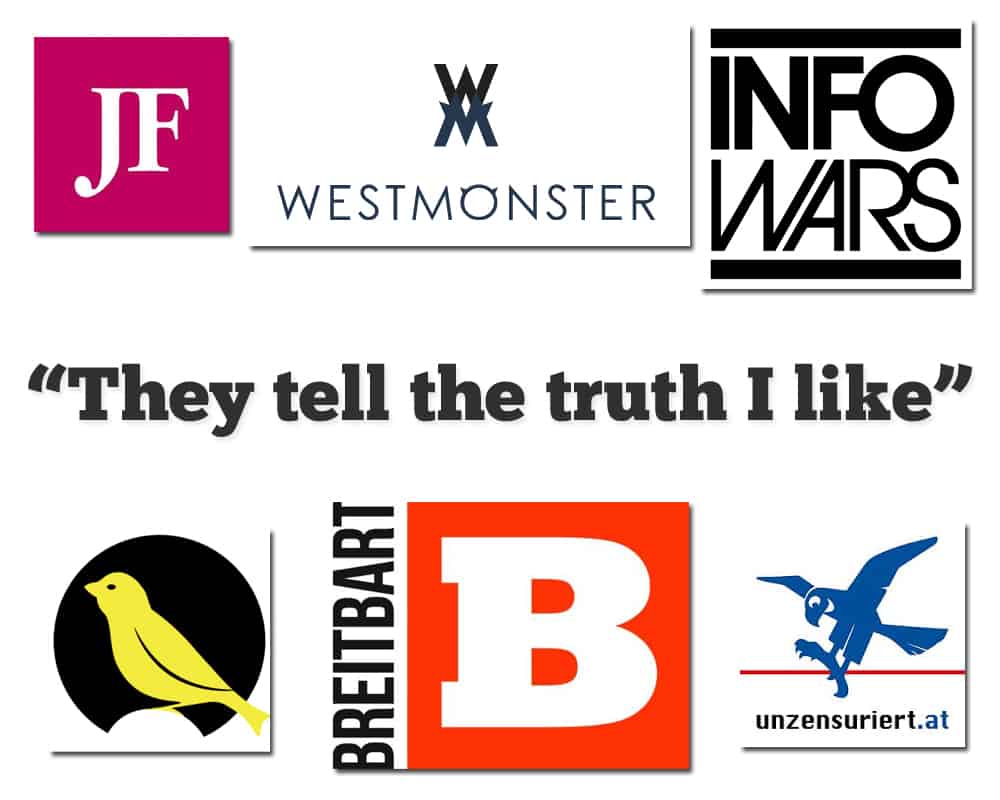 In recent years we’ve seen the emergence of a number of alternative, populist, or partisan websites that have grown rapidly in some countries largely through free social media distribution. In most cases these sites have a political or ideological agenda and their user base tends to passionately share these views. These sites should be distinguished from those that ‘deliberately fabricate the news’, even if they are often accused of exaggerating or tailoring the facts to fit their cause.

Partisan sites (e.g. Breitbart) are said to have played a part in bringing Donald Trump to power in the United States and in mobilising support for left-wing Labour leader Jeremy Corbyn (e.g. The Canary, Evolve Politics) in the UK. Though ideology is a key motivator, some sites are also looking to make money from these activities. The narrowness of their focus also separates them from established news sites like Fox News (US) and Mail Online (UK), which also have a reputation for partisan political coverage, but tend to cover the full range of news (world news, sport, entertainment). Their audiences also tend to be more mixed in terms of left and right.

The Role Of Partisan And Alternative News Sites In Europe

In this year’s Digital News Report we wanted to understand if these newer, alternative sites and blogs were gaining traction outside the United States. We worked with local European partners in ten countries to identify a number of sites that matched our criteria; namely websites or blogs which have a political or ideological agenda, mainly distributed through social media.

This methodology has a number of drawbacks; these sites are hard to classify and compare. We may have failed to capture important sites in some countries and survey respondents may not always remember smaller sites that they come across in social media. Despite this, our survey shows that many of these sites attract substantial followings and in some countries have higher reach and awareness than similar sites in the United States.

In comparing the United States with the United Kingdom and Germany, it is interesting to see the different profile of Breitbart, which operates in all three countries, reaching 7% of the US sample each week, 2% in the UK and just 1% in Germany. In all three countries we also see a large gap between awareness of these sites and actual usage. This suggests either that their impact has been amplified by mainstream media coverage or that people have used them in the past, but that they are less relevant today.

Proportion who are aware of/used selected brands for news in the last week (selected markets).

Most partisan sites in the United States come from a right-wing perspective and are popular with users who see the mainstream media as overwhelmingly liberal. Many are run by talk radio hosts (InfoWars, TheBlaze), or outspoken conservative commentators (Daily Caller). Here, one survey respondent offers a clear rationale for using these sites.

“Quite frankly, I get more substantial “real” information from The Blaze and Infowars than I get from today’s ‘fake news’ media and government pundits.”  (M, 76, US)

In the UK alternative sites are more mixes, coming from both sides of the political spectrum. Westmonster (2%) is a pro-Brexit site partly funded by right-wing businessman Arron Banks, while the Canary (2%), Another Angry Voice (2%), and Evolve Politics (1%), represent various shades of radical opinion on the left. Wings over Scotland is a popular and influential blog that fights for Scottish independence. Users of these sites say they are looking for alternatives to the mainstream media:

“I’m keen for Brexit to happen. Westmonster and similar news providers report on news the BBC and others avoid because it does not fit with their biased view.” (M, 66, UK)

“MSM [mainstream media] is biased, always covers the news to show the Tories in a good light, you have to look further if you want the truth.” (F, 48, UK)

In Germany it might be more accurate to characterise these sites as anti-establishment. Politically Incorrect News (2%) takes a critical stance on Islam along with multiculturalism and immigration and attracts an audience from the extreme left as well as the extreme right. Compact Online (2%) is closely associated with the right-wing populist party AfD, while Junge Freiheit (3%) is a nationalist newspaper brand that is reaching new audiences on the web.

In Germany a key motivation expressed was about finding alternative and different perspectives on the subject of immigration. Here traditional media, and in particular Public Service Broadcasters (PSBs), are seen by some as deliberately concealing the truth:

“I believe that the public service broadcasters such as ARD and ZDF are controlled by the state. That’s why I also inform myself on websites that offer free and uncensored news.”(M, 67, Politically Incorrect (PI-News), and Junge Freiheit user, Germany)

In Austria, the rise of the far-right (now part of a coalition government) has been accompanied by the growth of a number of partisan and alternative websites. The  best known of these is Unzensuriert (Uncensored), a site that the Austrian federal office for the protection of the constitution has described as xenophobic with anti- Semitic tendencies. Founded by a former Freedom Party politician, almost one in five (19%) of our sample has heard of this site, with 4% having accessed it in the previous week. Info Direct (2%), Alles Roger (1%), and Contra Magazin (1%) are three other far-right, anti-EU websites/magazines. Users of these sites are engaged by the anti-establishment views and also see them as alternative to what they view as a biased mainstream media.

“Because it is interesting and because as opposed to the ORF, it provides uncensored news.”  (M, 61, Unzensuriert user, Austria)

Next we compare three more countries with active alternative and partisan sites. In the Czech Republic a number of sites have been labelled as disinformation websites by NGOs as well as the Centre against Terrorism and Hybrid Threats set up by the Ministry of Interior in 2016. The best known alternative site is Parlamentnilisty.cz which reaches 17% of our sample. Other websites, many of which pursue an anti-EU and pro-Russian agenda, have a more limited reach.

In Sweden, a small number of right-wing websites reach around 10% of our sample each week with an agenda that is largely critical of the country’s liberal immigration policy. Meanwhile  in Spain the situation is a little different. The weakness of mainstream media has spawned a large range of alternative political websites and blogs, some of which have existed for many years. Libertad Digital and Periodista Digital follow an anti-Podemos and anti-Catalan independence agenda. Other sites such as Dolça Catalunya (3%) and Directe.cat (3%) focus exclusively on the Catalan issue but from opposing perspectives. OK Diario, which styles itself as the ‘website of the unconformists’, has featured in our list of main Spanish online sites for the last few years with 12% weekly reach.

“They tell the truth I like, not the damned politically correct truth.” (M, 65, Spain)

Proportion who are aware of/used selected brands for news in the last week (selected markets).

How Partisan Are These Sites Really?

By combining survey information about the political beliefs of respondents (a five point left/right scale) and usage of different websites (weekly usage) we can get a sense of how partisan the audience profiles is for each site. Indeed we can plot them on a map alongside more traditional brands. In the UK example below, the audience for Westmonster is overwhelmingly made up of respondents who self identify as right wing or extremely right wing. Those who use the Canary or the Another Angry Voice blog self-identify almost entirely on the left. By contrast the majority of alternative sites in the United States and Sweden sit on the right of our audience maps as a corrective to the broadly liberal profile of mainstream media. 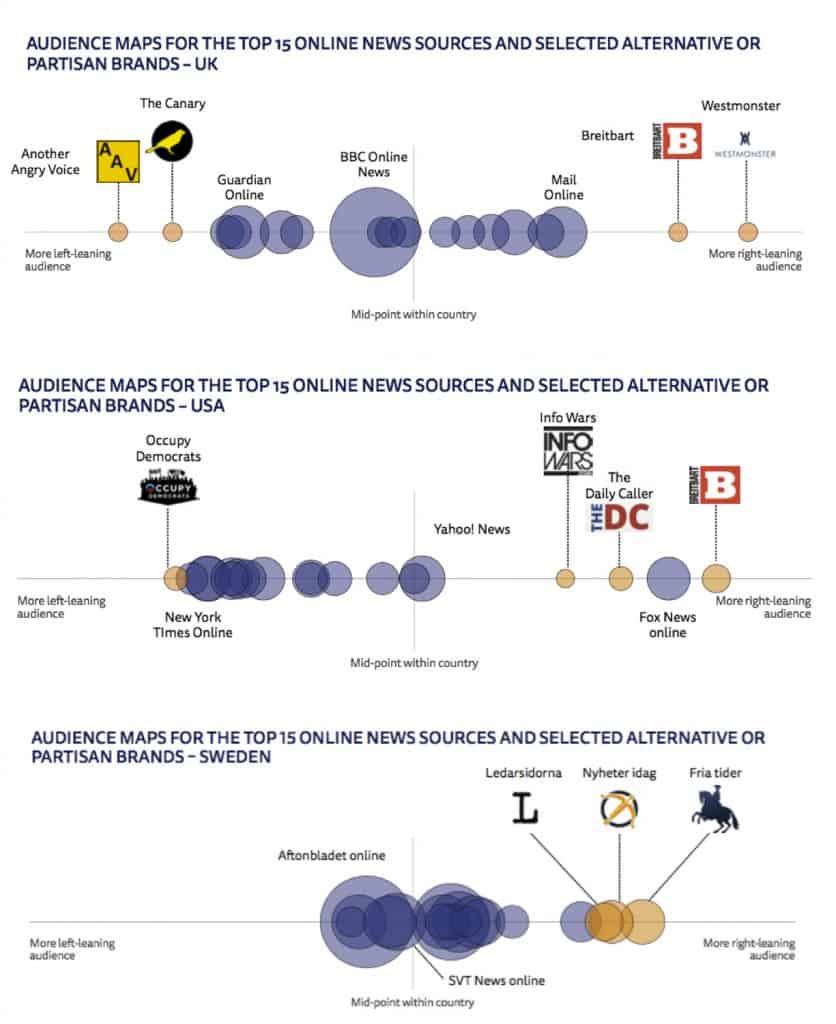 Q1F. Some people talk about ‘left’, ‘right’, and ‘centre’ to describe parties and politicians. With this in mind, where would you place yourself on the following scale? Q5b. Which of the following brands have you used to access news online in the last week (via websites, apps, social media, and other forms of internet access)? Q5c_2018_2. Which, if any, of the following have you used to access news in the last week? Base: Total sample in each market. Note: Those who answered don’t know to Q1F were excluded.

These maps show that these new websites and blogs have given voice to views that previously may have been unrepresented  in the media, but they also show the difficulties in classifying partisan sites. We find traditional media sites, like Fox News and some UK newspapers, also talking to partisan audiences even if they cover a much wider range of news beyond politics.

In other countries we find that these sites often speak to different kinds of divisions that are not fully captured by  a traditional left–right spectrum. Often we find sites on the both left and the right sharing a common anti-immigration and anti-establishment agenda. Further complicating the situation, in some Central and Eastern European countries the government itself also engages in populist narratives, which are covered by sympathetic (or more directly controlled) traditional media outlets.

Here the divisions between traditional and partisan brands may blur compared  with the examples on the maps above. In Poland, for example, the mainstream public broadcaster TVP, which has an editorial line that supports the ruling Law and Justice party, appears in a similar position on our map to PolskaNiepodlegla.pl (Independent Poland) a right-wing nationalist site created in 2013.

Q1F. Some people talk about ‘left’, ‘right’, and ‘centre’ to describe parties and politicians. With this in mind, where would you place yourself on the following scale? Q5b. Which of the following brands have you used to access news online in the last week (via websites, apps, social media, and other forms of internet access)? Q5c_2018_2. Which, if any, of the following have you used to access news in the last week? Base: Total sample in each market. Note: Those who answered don’t know to Q1F were excluded.

These sites reflect the wider populist and anti-establishment movements that are sweeping Europe. Many set out to present an alternative to mainstream media, which they see as part  of a corporatist or politically correct consensus. For the most part their reach remains limited, but high awareness suggests that their perspectives are influencing mainstream discourse, in a number of European countries.

These sites have been able to gain currency through social media distribution. But as Facebook takes into account trust scores, becomes more risk averse on content, and refocuses on friends and family, we could see these alternative websites struggle to retain attention.

The Digital News Report 2018 is published by the Reuters Institute for the Study of Journalism and can be found here.

If you liked this story you might also be interested in Germany’s AfD: With The Media And Against The Media.

Nic Newman is a journalist and digital strategist who played a key role in shaping the BBC's internet services over more than a decade. He was a founding member of the BBC News Website, leading international coverage as World Editor (1997-2001). As Head of Product Development for BBC News he helped introduce innovations such as blogs, podcasting and on-demand video. Most recently he led digital teams, developing websites, mobile and interactive TV applications for News, Sport, Weather and Local. He has played an important part in the development of social media strategies and guidelines for the wider BBC. Nic is currently a Visiting Fellow at the Reuters Institute for the Study of Journalism and a consultant on digital media. He is married with three children and lives in London.
» Media and Politics, Research » “They tell the truth I like”...