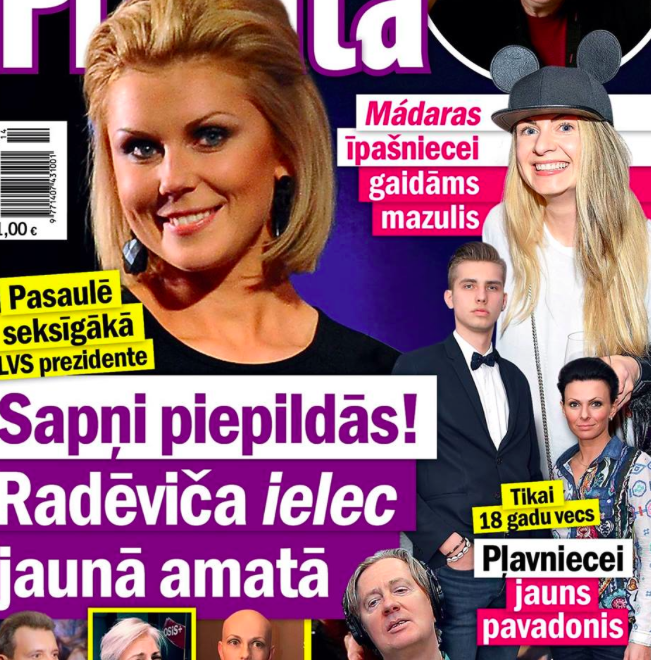 More trusted than newspapers? Privata Dzive – a celebrity magazine – is one of Latvia’s best selling publications.

Newspapers in Latvia are struggling. They are increasingly mistrusted by readers, who accuse them of pushing the political views of their owners. Revenues are down as advertisers spend their money on the country’s growing digital media sector. But despite the gloomy outlook for traditional news in Latvia, one sector of the country’s print media appears to be thriving: magazines.

Special interest print magazines, particularly about science and history aimed at younger audiences, and about the private lives of local celebrities – aimed at adults – are outselling national and daily newspapers in Latvia, confounding the general downward trend in the country’s print media.

News, lifestyle, hobby and healthcare magazines are also growing in popularity, according to a study by the Preses Serviss and Narvesen, carried out by SKDS.

The most popular print magazine titles regularly outsell newspapers across the country. The Baltic Media Health Check, published by the Riga-based Baltic Centre for Investigative Journalism, has recorded steady or increased sales and profits for many magazines, whereas newspaper turnovers have generally declined and a number of publishers are reporting losses.

Anda Rozukalne, Associate Professor and Head of the Communication Studies Department at Riga Stradins University, said Latvians (particularly Latvian speakers) read more magazines than newspapers because they are considered more ‘inspirational’ and relevant to everyday life – or at least they give the illusion that they are.

Readers consider newspapers and news sites to be either “politically influenced” or “filled with the superficial information, with a short shelf life,” Rozukalne said.

She added that readers have a more positive view of magazines. They are considered to “provide inspiration and regular support for the readers. This gives an additional value to the magazine, because magazines inform lifestyle aims and ambitions. This information helps readers make important decisions,” Rozukalne said.

In 2015 there were 322 magazine titles with a total circulation of 29.3 millions copies per year, according to the last published data of Central Statistical Bureau of Latvia.

A number of these titles are also available online, however only print circulation figures are taken into account for this study.

Once popular newspapers are losing their credibility

Ir sells 70,000 copies of its weekly print edition, according to TNS Latvia. Over the past nine years, Diena’s circulation has fallen by 70% to around 30,000 per day (although there is little doubt amongst Latvian media practitioners that the figure is considerably lower in reality). In 2015 it reported a profit of only around 60,000 euro. 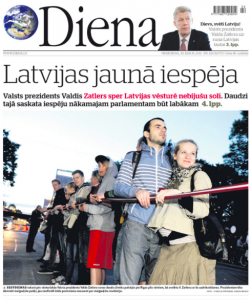 Diena, once Latvia’s most popular daily newspaper, has lost credibility and readers

The story of Diena’s decline is typical in Latvia. Many former readers believe the once popular liberal daily lost its independence in 2010, when a controlling stake was acquired by Viesturs Koziols, a Latvian property developer with political ties. A number of editorial staff left the newspaper at that time to launch Ir.

Readers appear to have followed Diena staff away from the paper. Diena’s circulation has declined while Ir’s has continued to grow.

Only the weekly Russian language newspaper MK – Latvija which sells approximately 45,000 copies per issue, can compete with Latvijas Avize for sales.

Latvia’s shrinking population has not helped the country’s publishing industry. Latvia now has a population of two million, a decline of around 6% since 2000. This is largely due to emigration, according to the United Nations.

One third of Latvia’s population is Russian-speaking. This ensures a market for Russian-language newspapers, especially weeklies.

Ainars Dimants (@AinarsDimants) is  Professor of Communication Theory at Turiba University, Media Institute. Before starting his academic career, he worked as a journalist in several Latvian media companies, including Latvian Television, Diena and Latvijas Avize. He has also been Chairman of the Board of  the Media Institute in Riga (Latvia) 2004 – 2012, which he co-founded  and was previously a Visiting Professor at Vidzeme University College  in Valmiera (Latvia), Head of the Department of Communication Studies at Riga Stradins University and lecturer at the University of Latvia. He is the author of five books on media  and journalism. Dr Dimants is a former Chairman of  the National Electronic Media Council of Latvia. He is the Director of EJO Latvia (http://lv.ejo-online.eu)
» Media and Politics, Media Economics, Recent » Latvians Trust Magazines More Than Newspapers