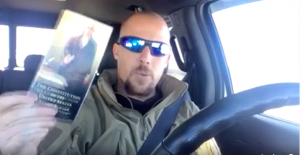 Patriot? Or Terrorist? An Oregon occupier waves the US constitution on Facebook

In the name of ‘freeing the local population from government control’, a group of armed men occupied a government building, entrenched themselves and blackmailed federal authorities.

Patriots or terrorists? This question remains controversial in the United States. The political climate, at the time of the occupation by more than a dozen armed activists, of the Malheur National Wildlife Refuge in rural Oregon in early 2016, was a volatile mix of racial tension, anti-immigration demagoguery, added to the drama of a presidential campaign.

The question caused charges that the US media downplay the threat of white rightwing extremism and sparked an ongoing debate about how the US media cover such events.

First media reports of the occupation on January 2, 2016, talked about a “building takeover” (Associated Press), some described the group as an “armed anti-government group” (New York Times) or “armed protestors” (Fox News). Soon enough, social media were lighting up with activity from people venting their anger about the media’s alleged hypocrisy. They claimed aggressive behavior of whites is accepted while the protests of blacks against police brutality are routinely scandalised.

As one commentator wrote on Ebony.com: “The glaringly obvious legal system irony comes into play when it seems that White men are subject to a different set of rules than people of color. The actions of the Oregon militiamen are evidence of that. No Black man, unless he was suicidal, would dream of occupying a federally-owned building and engaging in an armed standoff with the authorities.” 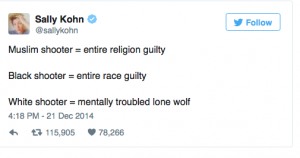 Is the media ignoring “white terrorism”?

Although some experts, such as CNN’s national security analyst, called the Oregon takeover “terrorism.”  The US media is increasingly accused of ignoring the existence of “white terrorism”.

Abed Ayoud, the legal and policy director for Washington DC-based think tank the American-Arab Anti-Discrimination Committee recently explained that he was “surprised” and “disappointed” at the lack of the use of the word “terror” in relation to a series of attacks carried out by white Americans, such as the racist killing of nine worshippers in a church in Charleston by Dylann Roof. “The only time the word terrorism or terrorist is used is when the perpetrator happens to be an Arab or a Muslim” he said.

“When the perpetrator happens to be a white American then the terminology is changed. So if it’s a white person then often we will hear that they have mental issues, they are troubled, different descriptions for their mental state,” Ayoud added.

Public debate over race in US society

How the media reacts to a standoff like the one in Oregon has implications that go beyond an isolated incident. As the issue of race in American society has made headlines from the Black Lives Matter movement to the boycott of the Oscars and to the failure of providing clean water to a predominantly black city like Flint in Michigan, the public debate about has heated up considerably.

However, protests against police shootings and the standoff in Oregon are different scenarios, says Kelly McBride, a media ethicist and Vice President for Academic Programs at the Poynter Institute for Media Studies in St. Petersburg Florida. “I think they are apples and oranges. Everybody kept saying that if a bunch of black people had taken over a federal building in Baltimore we’d be losing our shit. And yeah, we would be. That would be totally different. And if a bunch of white people were taking over a building in Baltimore. That would be really different, too.”

So who are the armed protesters in Oregon? Militants? Definitely. But militia? Only self-described. Organised militia groups do play a role in some Western States in the US but in this case, the activists came in from Nevada and claimed to speak for the local population in Eastern Oregon. Yet, while residents harbor skepticism and sometimes even anger towards the federal government, they were also united in their desire to see the occupiers leave.

McBride says this case also differs from other violent standoffs, such as Ruby Ridge in Idaho in 1992, because the government has been careful not to escalate the situation.  Law enforcement keenly tried to avoid any kind of confrontation – yesterday’s arrests took place away from the occupied refuge. “These people pose very little threat to anybody,” says McBride. “They defy federal laws and the federal government has to figure out what to do with them but you know if you compare the government response and the public response with this and Ruby Ridge which is an event that I had a small role covering. The government was under pressure to do something about these blatant law breakers and it ended up being an unnecessarily violent confrontation.”

The original article, written at the time of the occupation has been slightly updated.

Thomas Schmidt is a doctoral student at the School of Journalism and Communication at the University of Oregon. Prior to his academic career, Thomas was a reporter for Kleine Zeitung, Austria’s second largest daily newspaper, the monthly narrative magazine Datum, and ORF (Austrian Broadcasting Corporation). He also served as the inaugural director of “biber-Akademie”, a training program for young would-be journalists from immigrant families in Vienna.
» Media and Politics, Short stories » Terrorist? Patriot? How US Media Cover...