News Is Turning Into Entertainment: Blame The Photographs 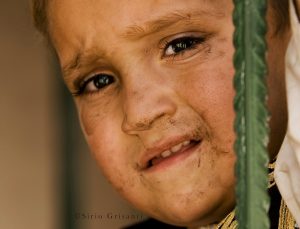 “You see a poor child, you feel sorry, but afterwards there’s the sports news. Later on, there is no trace left, no deeper imprint.”

An increasing reliance on visual images in the digital age is turning news into entertainment, warns Matteo Stocchetti, Adjunct Professor at Arcada University of Applied Sciences in Finland. Stocchetti argues that images tap viewers’ emotions, rather than their minds.  As the media landscape becomes overwhelmed with images, it pursues spectacle and emotional involvement, rather than rational information. This stifles critical reflection.

Stocchetti’s research concentrates on the role of communication in creating and endorsing power bases which, he claims, now mostly promote “a failing neo-liberal global order.”  He argues that ‘visual propaganda’, based on intentional blurring of reality, preserves this status quo.

Stocchetti discussed his views in an interview with the EJO:

Propaganda is a common term, but the definition can be problematic. Could you briefly describe what this term precisely means?

Propaganda etymologically comes from Latin word propagare, which means to spread or extend something.  This notion involves the idea of distributing something that is important and not primarily trying to convince somebody.

In the digital age, what are the main characteristics of spreading ideas to gain attention?

I am afraid that a rather dangerous message in the visual propaganda of the digital age is distraction. The reliance on the visual can easily become a means of involving emotions in ways that inhibit, rather than foster, critical reflection. Even when providing information about very political topics, for example labour conditions or military actions, there is a strong tendency to portray them not as political issues but rather as entertainment. Watching the news is then not about giving facts and informed opinions but rather about raising emotions. This kind of propaganda mobilises people’s feelings, but tries not to make them think. In this way information is transformed into so-called infotainment and reporting about important social, political and economic problems is experienced as a spectacle.

What are the consequences of acquiring information mainly through emotions?

Important events narrated through attractive images, or stories that shock, become de-politicised… News of this kind, and its context, ceases to be relevant the moment the next pieces of news comes along and appeals to another set of emotions. You see a poor child, you feel sorry, [but immediately] afterwards there’s the sports news. Later on, there is no trace left, no deeper imprint. The problem with emotional response is that it is strongly involving, but ephemeral – of short duration.  By contrast, it takes some time to form an opinion, and when it comes to potentially changing it, you want clear evidence of why you should.  Emotions, especially provoked by images, do not work in the same way.

What impact does this have?

This can be dangerous if the majority of recipients are susceptible to whoever comes out with a better image or a stronger visual narrative. There is scope for spreading disinformation and manipulation. And this is a big chance for demagogues. Manipulation is a form of propaganda, in which ideas that are spread are intentionally based not on reason but on emotions, usually fear, anxiety, hatred. In the digital age, people who are in charge of producing news coverage raise strong emotions partly intentionally (and quite logically): media funding, unfortunately, depends on viewing figures, the number of ‘clicks’, or how many times people visit a certain platform.

If the purpose is to promote commercial interest, what strategies do media producers use?

The influence of every ideology, including democratic ideology, depends on control of the reality: the possibility of controlling the means through which we make collective sense of what is happening around us. This is crucial. But in the age of digital media, as many have noted, the notion of the ‘real’ itself becomes problematic.  Media ‘reality’ reflects the main tenets of the neo-liberal project – de-regulation, privatisation, laissez-faire capitalism. This propaganda is largely based on blurring reality to suggest to people that certain things are fine as they are; that certain ideas are actually legitimate.

What is the main message of this propaganda – which idea is being widely spread?

Widespread commercialisation and omnipresent consumerism, which are intoxicating our societies, impoverishing our culture, and ultimately creating the conditions for inequality, injustice and conflict on a global scale. They are not dependent on any specific ‘campaign’, rather they permeate virtually every dimension of social communication. The fundamental message seems to be that the only relevant values are those which have market potential; something is important only if it brings profit to someone and when it is associated with an economic interest. And that is usually damaging for democracy. I do not think that anything like the truth is possible in these conditions.

Can this situation be changed? How can we protect ourselves from being manipulated by visual media?

Education is the answer. In order to use information properly, to ‘see through’ the confusing effects of manipulation and to develop critical ideas, people have to be trained. Critical thinking is not a natural skill. What we should be teaching is basically the capacity to think in critical terms; to be able to understand what is said, written and communicated; to think with our own head, to have moral values, to compare information, to put the pieces together.

I would say there is growing awareness that there is something deeply wrong with the neo-liberal project; that capitalism and democracy are incompatible ideologies but influential forces in our societies are inclined to sacrifice the latter to preserve the former. We should not give up democratic ideals; we cannot come up with better ideas than democratic ones, but now we seem to ignore them. And this is the challenge for educators. The battle is not yet lost.

The picture used to illustrate the story was chosen because it is an excellent photograph which provokes an emotional response.  Pic Credit: Flickr Creative Commons:  Sirio (Kaleidescope of emotion)

Martina Topinková is a PhD student at Institute of Communication Studies and Journalism, Faculty of Social Sciences, Charles University in Prague. Her research interest areas are visual communication and photojournalism. She is particularly interested in visual literacy in digital era, which is the topic of her dissertation thesis.
» Ethics and Quality, Latest stories, Media and Politics » News Is Turning Into Entertainment: Blame...