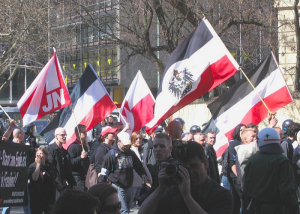 Refugee camps set alight across Europe, migrant children attacked by masked men in Stockholm, Anders Behring Breivik’s attack on a social democratic youth camp in Norway and a series of acts of Neo-Nazi terror in Germany – reporting hate crime and right-wing extremism is vital in democratic societies. But how can journalists do so without inspiring further acts of violence?

Is it possible for journalists to inform the public without providing a platform for the ideologies that stood behind the respective crimes? Do aspects of media coverage serve as a deterrent, or as an inspiration?

For a recent study, Between NS-Propaganda and Facebook, former high-ranking members of extremist and Neo-Nazis groups across Germany were interviewed about the impact of the media on the actions and ideology of their organisations.

The research concludes that journalists should continue to report hate crime, but with care.

The research, carried out in cooperation with EXIT – a German organisation that helps former members of right-wing extremist groups return to an ordinary life – was based on qualitative interviews conducted in several German cities in 2014.

Stefan B was one of the interviewees. As a former influential and respected Neo-Nazi leader in Southern Germany, he is one of the few who understands the impact of media reports on right-wing extremism.  Now he works as a freelance journalist, trying to inform the public about the dangers of right-wing ideology. “That is not an easy thing to do,” he emphasises.

Not only is he faced with intimidation and threats from his former companions, but also with the difficult question of how to report on right-wing extremist violence without becoming a source of inspiration for other extremists who are prepared to go beyond forms of verbal, political protest.

Right-wing extremists can be professors, bankers or punks


Stefan is short, has dark eyes and long, dark hair, which he wears loose. It’s hard to believe he used to be a Neo-Nazi. But it’s been a long time since you could identify a Neo-Nazi by combat boots and bomber jackets, he says. He talks about different right-wing groups whose members partially look like punks, partially like bankers. He criticises the stereotypical representation of the right-wing extremist scene in the media: “People are portrayed as being stupid, although this is not the case. There are professors who are active in the right-wing scene. There are many extremely clever people – but there are also a lot of idiots, I don’t want to deny that, and they are dangerous as well –  but you mustn’t forget that not only those Nazis who beat others up are dangerous, but also those who strategically and tactically try to infiltrate and change our society.”

Seemingly relaxed and down-to-earth, Stefan explains he is haunted by feelings of guilt. His ties to Neo-Nazi and other parts of the extreme right-wing community were both numerous and profound.

At the time, he also knew the clique of Beate Zschäpe, alleged members of the Neo-Nazi terror cell, the National Socialist Underground (NSU) that for years operated and murdered in various regions of Germany, without appearing on the police radar.

The fact that the number of xenophobic hate crimes surged shortly after the NSU-murders were uncovered and widely reported in the media is evidence that there is a thin line between informing the public and motivating imitators. On average three xenophobic crimes are committed in Germany each day.

Having been a member of the extreme right-wing scene for years, Stefan asserts that he has learned from his mistakes and that he has changed. Now, he says, it is time to make up for his past.

Markus and André used to be part of the right-wing extremist scene, too. They led a group of autonomous nationalists, whose members look more like left-wing extremists than Neo-Nazis. They are also convinced that it is better that journalists report the different faces of the right-wing scene. Ignoring it would be a way to support the extremists, they believe. If youngsters don’t know what a Neo-Nazi looks like, it could be easier to recruit them to the ideology, they say.

Markus and André left the group at the same time; they supported and motivated each other. Both stress that media coverage prevented, rather than encouraged, their exit. Markus criticises the journalistic attitude that seeks to avoid right-wing ideological arguments: “As there has never been a discussion I always thought the media was scared to address me politically…,” he said.

André also believes that journalists fail most of the time. He talks about right-wing extremist groups aiming to get media attention by committing violent crimes – usually they are successful: “It’s like some kind of a brand, because you know you are treated [a certain] way in mass media. For groups, this is a very important way of identification. This also attracts many people,” he said.

The pride in media reports of extremist activities even leads right wing extremists to collect media coverage about their own illegal activities.

Extremists exploit the media to get a wider audience

André and Markus say extremists exploit media in order to reach a wider audience and to threaten certain social groups: “Imagine there are right-wing extremists who mess up a synagogue with blood, destroying the windows by throwing a pig head through it,” they say. “Mass media serve as a means to spread that this is happening. So it’s not only this one specific Jewish community that is affected, but all Jewish communities. So it’s also about creating a scene of violence.”

What consequences should journalists draw from such assertions? Should they just stop reporting right-wing extremist violence?

“Please no,” remarks Stefan, the freelance journalist. “Repressions, prohibitions of companionships, this is only possible due to the pressure of the mass media. This is weakening the [Neo-Nazi] scene a lot.”

In his own reporting of right-wing violence and extremism, Stefan tries to focus on the victims and any punishment, rather than on the suspects. This is a deterrent, he says, as even right-wing extremists dislike jail.

When asked for recommendations for other journalists he advises journalists not to dodge discussion of the issues and ideologies and to contexualise right-wing assertions: “When people ask for a restriction of immigration, or when they ask for a retransition of immigrants, what does this actually mean in the end? What does that look like? And has there ever been something comparable before in history,” he said

This contextualisation might help to redress right-wing extremist attitudes. In the best case, journalists could promote a critical discussion which could lead some to reject the ideology.

Stefan pushes his chair back. He has to drive to Dresden today to report on a right-wing extremist demonstration. He will probably meet some of his former friends there. When asked whether he’s afraid, he answers: “When they threaten me, this often does not mean a lot. When I can inform others about the dangers of the scene and compensate for what I’ve done in the past, then it’s worth the risk”.

The research, conducted within the scope of a masters thesis at the Ludwig Maximilian University in Munich, were published in Journal Exit Germany.

This article was first published on the German EJO

Katharina Neumann and Philip Baugut are researchers at the Department of Communication Studies and Media Research at the Ludwig Maximilian University of Munich.
» Latest stories, Media and Politics » Reporting Hate Crime: Informing, Not Inciting