Simple Yet Sophisticated: How Hungary’s Pro-Government Media Use Images 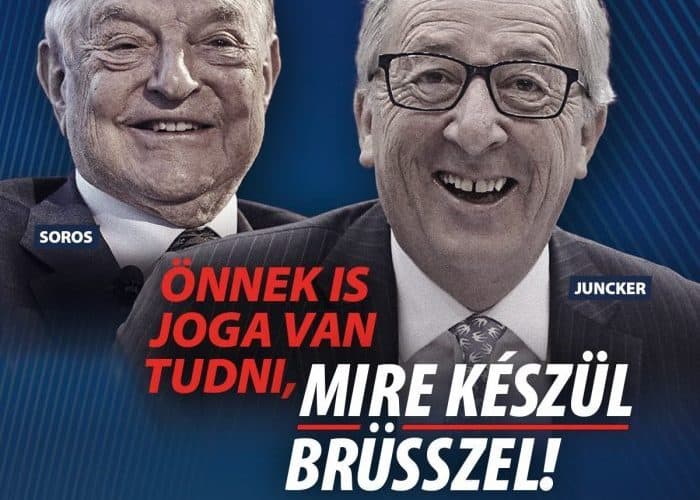 Poster forming part of government propaganda campaign accusing the EU of seeking to force Hungary to accept migrants. The caption reads “You have a right to know what Brussels is up to!”

The Hungarian government has sparked outrage with its controversial poster campaign implying that US philanthropist George Soros and European Commission chief Jean-Claude Juncker are plotting to flood the country with migrants.

With the latest posters – which show Soros and Juncker sporting mad grins – Prime Minister Viktor Orban and his Fidesz party are seen as having crossed yet another “red line” in their ramping up of anti-EU sentiment and disregard for shared European values.

The centre-right European People’s Party (EPP) grouping in the European Parliament, to which the Hungarian ruling party belongs, has called on Fidesz to stop its anti-EU campaign or face ejection from the bloc. On 20 March, the EPP will vote on whether to expel Fidesz.

Hungarian photojournalist Márton Magócsi, who works for the independent media outlet Abcúg and is currently engaged on a research project at the Reuters Institute for the Study of Journalism, explained to EJO how the poster campaign fits into the pro-government media’s use of images for propaganda purposes.

The Hungarian government spends a lot of time and effort projecting migration as a serious threat to the country and the Hungarian way of life. How does the pro-government media use images to reinforce this message?

The way in which images are used to push this message is both very base and very sophisticated.

The images themselves are certainly very base. Migrants need to be threatening, male, wild and criminal-looking. They should have a victim, preferably blonde, female and white. Opposition politicians have to look stupid, incompetent and should preferably be depicted alongside a convict or of course George Soros. Opposition supporters should look threatening, foreign, gay – but at the very least, clueless.

The photos are primarily used for the emotional reinforcement of the framing of the issues, to make sure that the visual framing is in line with the original message. Basically, the intention is to provoke fear, anger and moral outrage, and the purpose of the images is to reinforce these sentiments.

These are all very basic and tribal drivers of action – the intended action being of course to persuade people to vote in the correct way. At least this is my working hypothesis for the research I’m doing at the Reuters Institute; we shall see how the data supports it.

So in what way is this approach sophisticated?

Though the use of photos is simplistic, the coordination is in fact quite sophisticated. The type of imagery used is consistent, and in some cases photos have been produced centrally and distributed across multiple media outlets: government ad campaigns, state outlets, private outlets owned by businesspeople loyal to the government, and social media channels. This is all done quite consistently and constantly.

The current Juncker/Soros poster campaign is a continuation of this. Pro-government media consistently follow up and reinforce the main thrust of the campaign with stories carrying the message that “Brussels bureaucrats” are pro-immigration. They claim that Fidesz is the strongest party in the EPP and wants to steer the group back to “true Christian democracy”. And of course, there are frequent side-swipes insinuating that Juncker is incompetent. The papers reproduce the poster, and so the imagery backs up these messages.

What about independent media outlets’ approach to the use of photos?

One of the first things we were taught in photojournalism school was that you shouldn’t publish a photo of a politician with a stupid grimace just because you don’t like him. We were told not to flatter them either. The way you depict people, events and things should say something meaningful and true about them. If that’s not possible, you should keep some distance and just try to honestly convey your experience to the reader.

Most editors and photographers I know try to abide by these principles, and these days, it’s definitely easier to do this in independent media than in pro-government outlets. We’re yet to see an unflattering photo of the prime minister in a pro-government newspaper!

If you liked this story, you may also be interested in A Major Step Towards An Authoritarian Media Regime In Hungary

» Ethics and Quality, Photography and Video, Recent » Simple Yet Sophisticated: How Hungary’s Pro-Government...